See Movie Magic Central on Celebrity-infused Private Tours of Hollywood, the most famous location in the world for movies and television with lots of celebrities to be seen on a daily basis going to or from the many Hollywood studios and film locations.

Stepping on the stars of celebrities on Hollywood Boulevard when on a private tour of Hollywood is just one of the things to do in this very famous neighbourhood in Los Angeles.

Hollywood Boulevard is a famous street in the neighbourhood and a great place to take a walking tour because then you can see up close the famous stars all along the sidewalk or in Muhammad Ali’s case on the wall of the Kodak Theatre because he ‘did not want to be walked on!’

An interesting fact on how Hollywood emerged as the filmmaking centre; Thomas Edison’s company in New Jersey held nearly all moviemaking patents and anyone who began or made movies were sued and production was stopped. To get away from this and where it would be difficult to enforce or sue the filmmakers, they moved out west to Los Angeles.

Experience Sunset Boulevard on our Open Top Hollywood Tour with our fun and very knowledgeable driver/guide, you will be entertained with the sights and stories!

Top 10 Things to Do in Hollywood

1 On a walking tour or city tour of Hollywood, you will definitely get to see the Hollywood Walk of Fame. These are stars embedded into the sidewalks of Hollywood Boulevard with the names of the celebrity that star is dedicated to. It began in March 1960 with Stanley Kramer having the honour of the first star. So far there are over 2,600 stars dedicated to celebrities and people from all different genres.
Hollywood Sign

2 Another place that has to be visited, when in California, is the Hollywood sign. On a sightseeing tour, it is one of the most popular attractions as it is such a famous landmark known worldwide and an American cultural icon. Situated on Mount Lee in Hollywood Hills, Santa Monica Mountains. First erected in 1923, by 1973, it was in disrepair and the local people rallied to protect it and it was declared a Cultural Historical Monument.
Universal Studios Hollywood

3 Take a guided tour of the Universal Studios Hollywood which is a film studio and theme park. When on tour in the film studio, you get to go behind the scenes and see the 13 city blocks on 4 acres of historic studio which is the largest set in history and was built by Steven Spielberg. You will see such things as the plane crash from War of the Worlds or Wisteria Lane from Desperate Housewives and watch out for Jaws lurking about.
Grauman’s Chinese Theatre 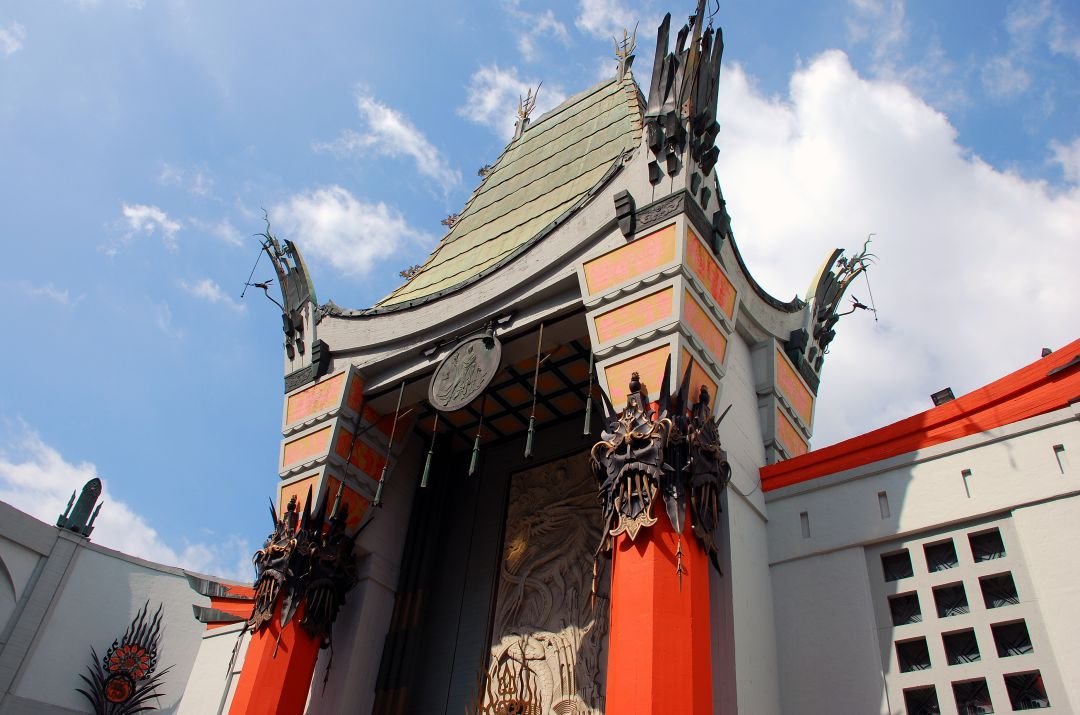 4 When on a sightseeing tour of Hollywood, you will see the famous Grumman’s Chinese Theatre which was declared a historic-cultural landmark in 1968. It was stated ‘to visit LA and not see the Chinese Theatre is like visiting China and not seeing the Great Wall’. It opened in 1927 to the most spectacular opening in motion picture history devised by showman Sid Grumman. It is here every filmmaker wants his movie premiered.
Griffith Observatory

5 Take a guided tour of Griffith Observatory and visit Southern California’s gateway to the cosmos. The mission of this Observatory is to inspire everyone to observe, ponds and understand the sky. See exhibits such as Astronomers Monument and Sundial, the Cosmic Connection or visit the Leonard Nimoy Event Horizon Theatre. Look through huge telescopes and then take a rest in the Cafe at the End of the Universe.
Dolby Theatre

6 Experience the celebrity glamour and red carpet on a guided tour of the Dolby Theatre. The design of this magnificent theatre was inspired by the elegance of a European Opera House and has state of the art, most up to date technical capabilities. It is here that the like of Celine Dion, Prince and many others performed. The Oscars, Daytime Emmy Awards and American Idol finals were here. Star Wars The Force Awakens World Premiered here.
Hollywood Museum

7 A thoroughly interesting guided tour to take is at the Hollywood Museum. It is here you can see over 100 years of Hollywood memorabilia. The breathtaking exhibits in this museum shows authentic one of a kind costumes, props, scripts, personal artefacts of famous stars, vintage memorabilia and so much more. You can experience Hannibal Lector’s jail cell from Silence of the Lambs or Boris Karloff’s mummy.
Universal CityWalk

8 When in Hollywood, you will, one way or another, find your way to Universal CityWalk which is a Three Block Entertainment, Dining and Shopping Promenade in Hollywood. There are more than 30 places to eat, three fantastic nightclubs, a 19 screen theatre and over 30 unique shops. Also, take a look at the 5 Towers state of the art concert venue and if you have a chance to see any performance here, take it!
Ripley’s Believe It or Not! Odditorium

9 Take a sightseeing tour to Ripley’s Believe It or Not! which opened its Hollywood doors in 1992. This museum is following in all the other Ripley’s all over the world, in the tradition of searching the globe for the most unbelievable exhibits found in the world. Robots made from scrap cars, Art from pieces of duct tape, a genuine shrunken head are only a few of the weird and wonderful to be found here.
Museum of Death

10 While you are on your walking tour of Hollywood Boulevard, you will come across the Museum of Death. First established 1995 by JD Healy and Catherine Shultz with an aim ‘to make people happy to be alive’. It is here yo will find the world's largest collection of serial murderer artwork, Charles Manson crime scene photos, original documents from the Black Dahlia murder and so much more. It is an absolutely fantastic informative tour.

Little facts you may not know;

See on a sightseeing tour the light atop the Capital Records Tower which blinks continuously, it is actually spelling out Hollywood in Morse code and has done, since1956, when the building first opened.

Neil Armstrong and the Apollo XI crew have moons instead of stars on Hollywood Boulevard which you can see on a walking tour.

How the name came about according to a diary of H.J. Whitley; When he was standing at the top of a hill over the valley, a Chinese man passed in a wagon. He asked the Chinese man what he was doing and his reply was “I holly-wood” meaning I haul wood, HJ Whitely decided there and then that the name his new town would be Hollywood.

It is recommended that the best time to visit the State of California is anytime during the months of September to November. The Autumn still has warm temperatures and there are fewer crowds than the summer months. It is a better time to go on sightseeing tours. Check out when there are events or celebrations on during the year as they are always a good time to go no matter what the weather is like.

There are cheap, mid-range and expensive hotels, guesthouses and restaurants all over the United States; how much you spend will depend on how much you have or want to spend. It is possible to eat lunches for as little as $5 if you are not fussy with location. A boutique hotel for one night B&B ranges from $180 to $380. The variation is due to the time of the year and peak or off seasons. The price of private tours will also vary with the seasons.

Research on the area you are travelling to is advisable and book all private tours or sightseeing tours in advance of travelling to ensure no disappointment when you arrive. Make restaurant reservations as early as possible when in California. Never walk alone at night and avoid dark streets. Be aware of pickpockets as they are everywhere in the world, always only carry enough money for the duration you are out and have it securely on your person.

The majority of California has a Mediterranean-like climate which are warm, dry summer and mild, wet winters. January-March are the winter months and vary from cool temperature in San Francisco to sunny days in Los Angeles and San Diego. Summer June-August can get very hot no matter what city you are in. Spring and Autumn are a combination of mixed, very bearable temperatures, rain and sun