It is impossible not to ignore the magic and charm of Cambodia with its vast array of cultural and spiritual sites and sounds. Take a guided tour and explore the magical, charming Angkor Wat.

Peace has at last returned to this beautiful country, wrecked by over three decades of war, yet the Cambodians smile with their arms wide open to welcome the world.

It is blissfully under-developed coastlines are truly stunning and a great contrast to the craziness that is Pnomh Penh. The remanents of the once great Khmer Empire are evident everywhere as they once ruled Thailand, Vietnam and Laos. Angkor Wat is a great example of the Khmer genius matched by only a select few other sites on earth.

Get out into the countryside amongst the swaying palms and fertile rice paddies, explore local villages and tropical islands fringing the coastline.

Make a custom tour and trek through the Cardamon Mountains a vast wilderness to see the many species of rare birds and animals or seek out the freshwater dolphins in the mighty Mekong River.   Read More... 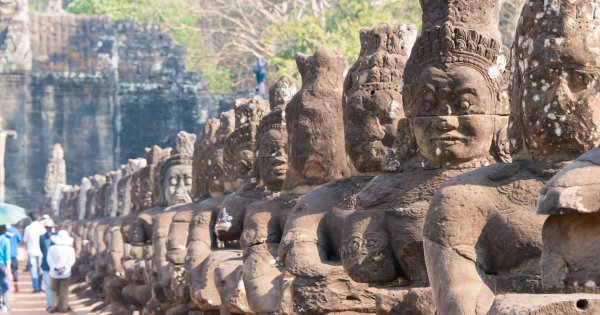 Stunning temples on a truly wondrous scale await the explorers of Cambodia and many other experiences await the curious tourist.

A guided tour of magical Angkor Wat, the jewel in the crown, one of the most impressive ancient Temples of the world.

Make a custom tour of Bayon Temple where heaven and earth are said to meet at the centre.

Check out the stunning landscapes by trekking up the beautiful Kulen mountains.

Camp out all night at the Monastery and watch the stunning sunrise.

The perfect 7 step pyramid and its many ruined Temples dedicated to God of Happiness.

The Citadel of Beauty and its intricate, delicate carvings and Hindu tales.

Spectacular Silver Pagoda and its flooring of over 5,000 silver tiles and Emerald Buddha.

Top 10 Things to See and Do in Cambodia 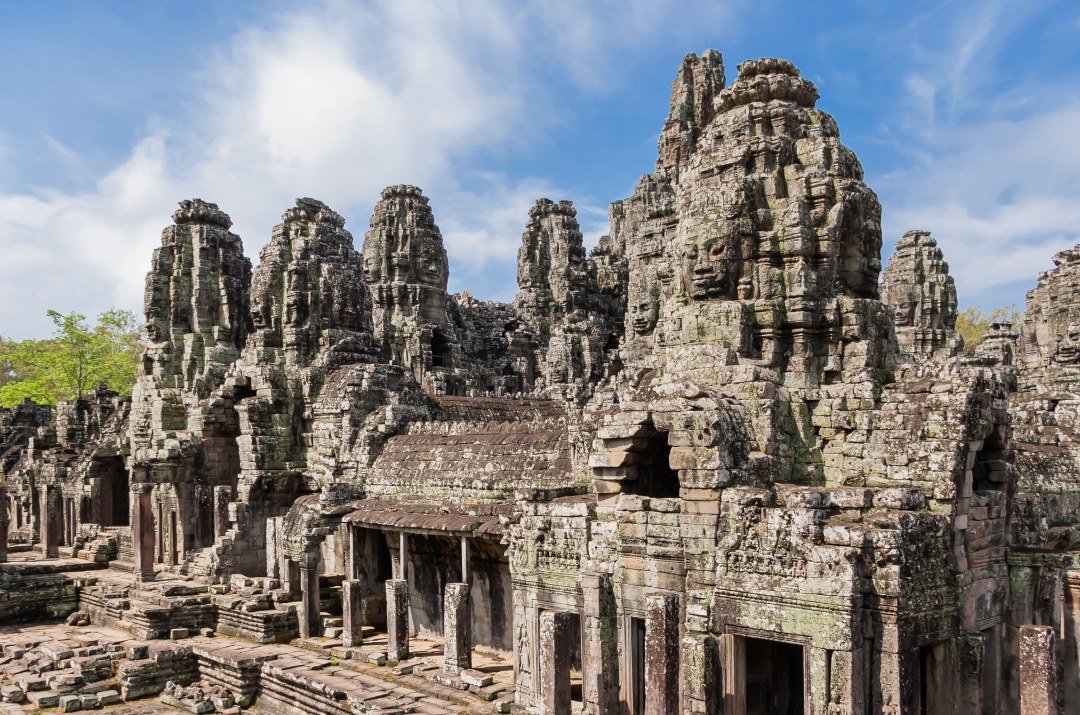 1 Known for its stunning architectural splendour Angkor Wat is a wonder on a grand scale. Surrounded by a moat and only reached from the west by way of a causeway it is a truly breathtaking site. Constructed originally as a Hindu Temple it is elaborately decorated with sculptures and carvings and four temples at the centre form the shape of a lotus flower. Take a custom tour of this peaceful and truly spiritual location, not to be missed.
Bayon Temple 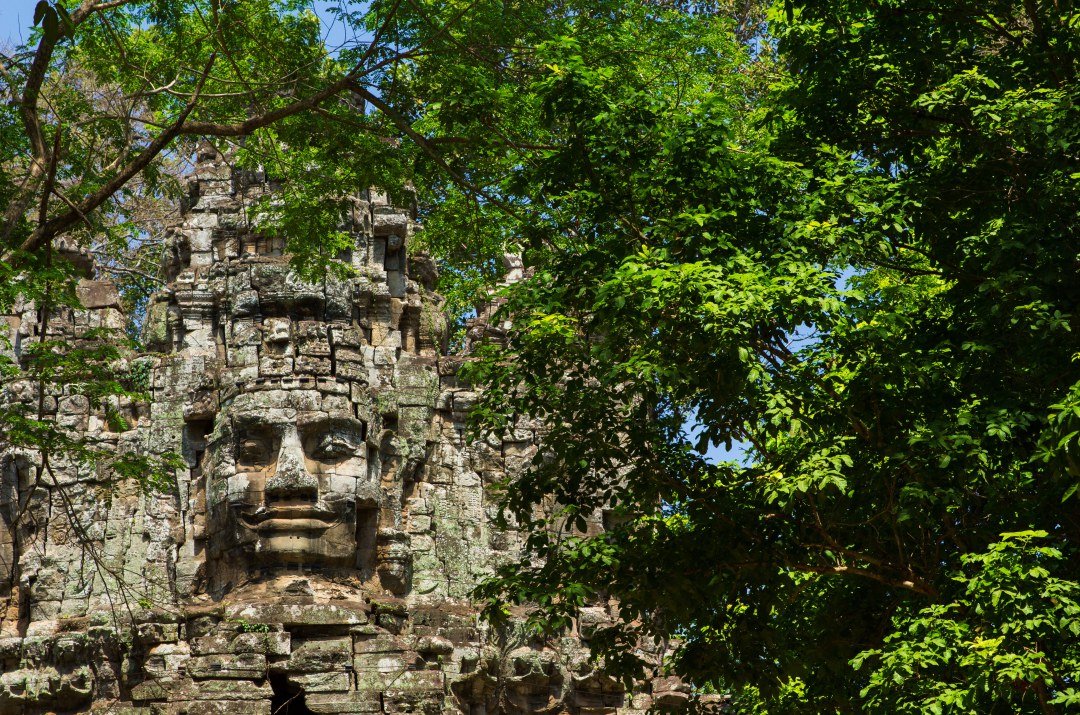 2 Built at an exact north-south east-west compass location is Bayon Temple with its dozens of curious smiling stone faces looking down from every corner. The exact centre represents the intersection of Heaven and Earth, and its walls depict a remarkable collection of once gilded but now faded carvings of historical and legendary events. Take an escorted tour wander the ruins and imagine life here before the jungle reclaimed it as its own.
Preah Vihear 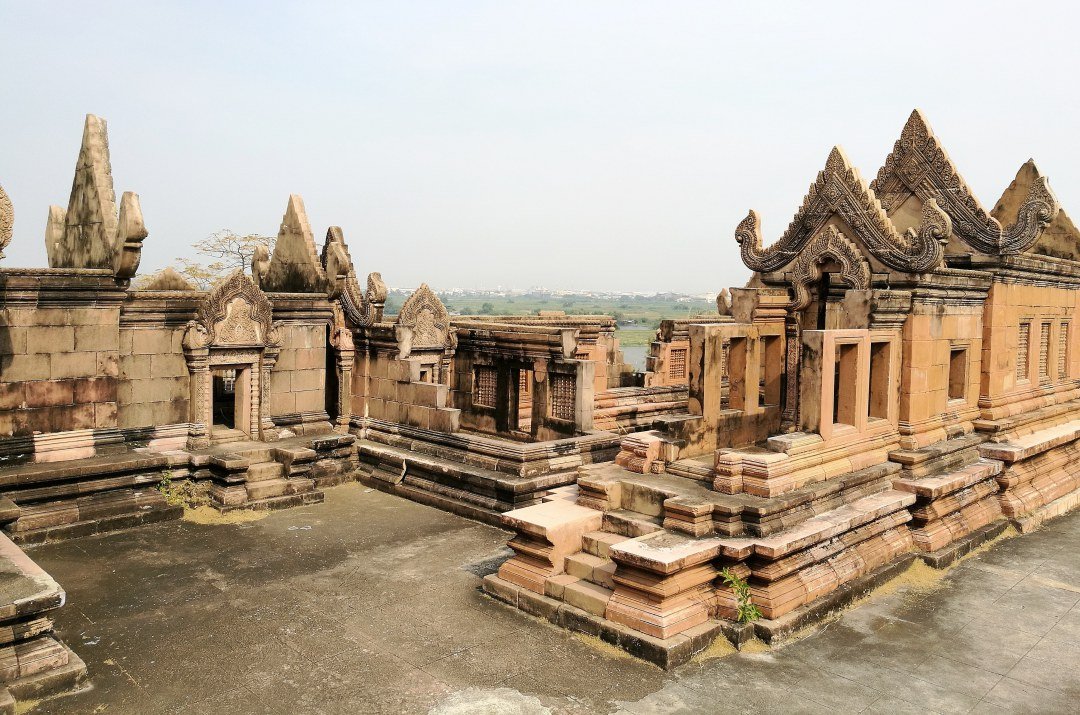 3 Forming a natural border between Cambodia and Thailand the Dagrek mountains are the home to Preah Vihear an extremely well persevered Temple built by the Khmer Empire. Perched on a cliff at the edge of a plateau it looks out over there great plain of Cambodia. A series of sanctuaries linked by various stairways and pathways make up this complex built in the 9th century to perfectly complement the surrounding landscape .
Koh Ker 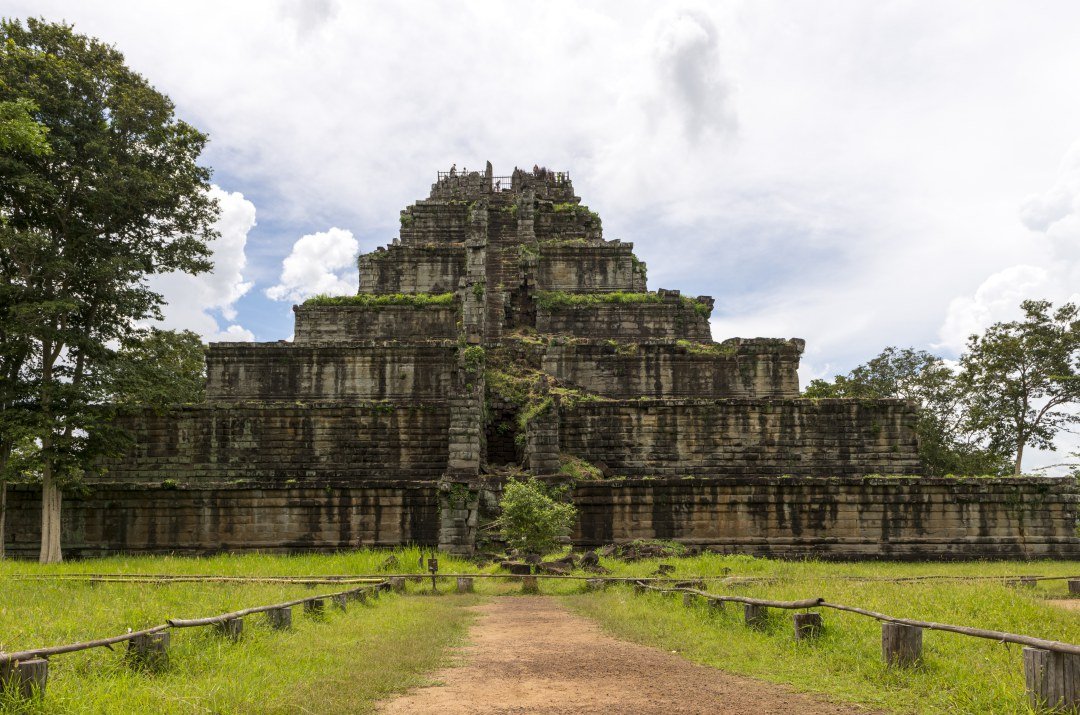 4 Once hidden in the distant jungle is found a perfect example of a 7 step pyramid and its many ruined temples. For a brief period Koh Ker was the capital of ancient Cambodia and this pyramid dedicated to the God of Happiness is the largest in the region. More temples made of brick and traditionally tree sap as mortar are being unearthed almost daily in this overgrown jungle region giving the whole area a sense of mystery and discovery.
Banteay Srei 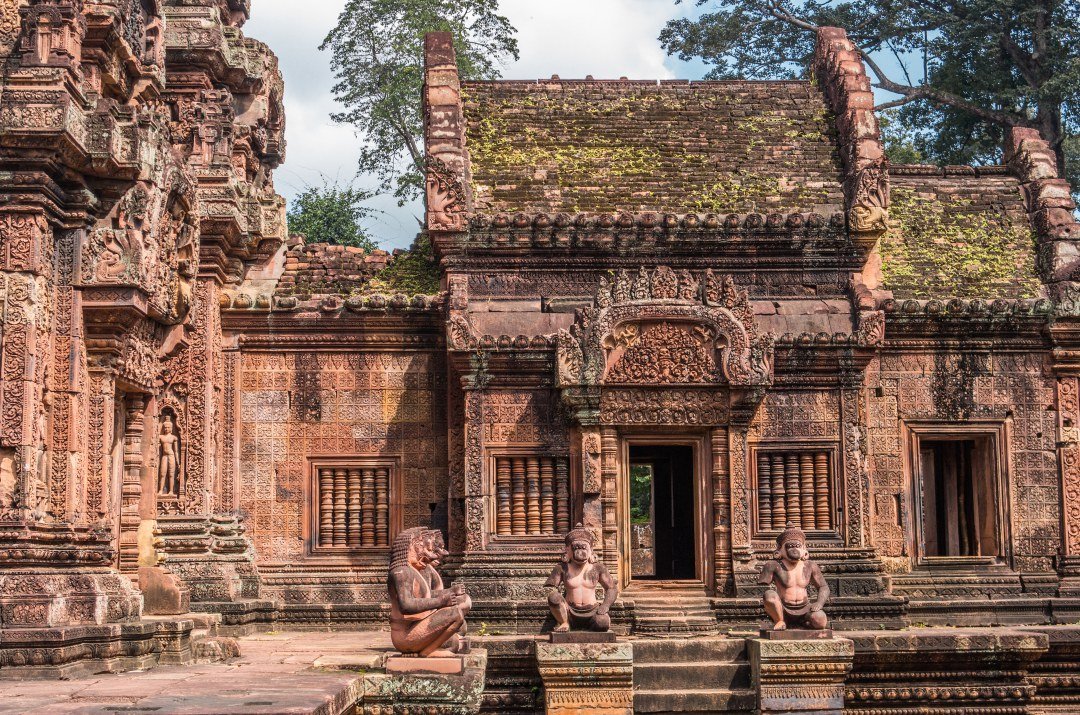 5 Banteay Srei or Citadel of Women or Beauty is so named as the tiny, intricate carved reliefs around the temple could only have been carved by the delicate hands of a woman. Some areas have been lovingly restored to their former glory including 2 libraries in the inner enclosure. On a guided tour of the inner sanctuary, now surrounded by a dry moat, you will hear many Hindu tales from far off ancient times.
Silver Pagoda 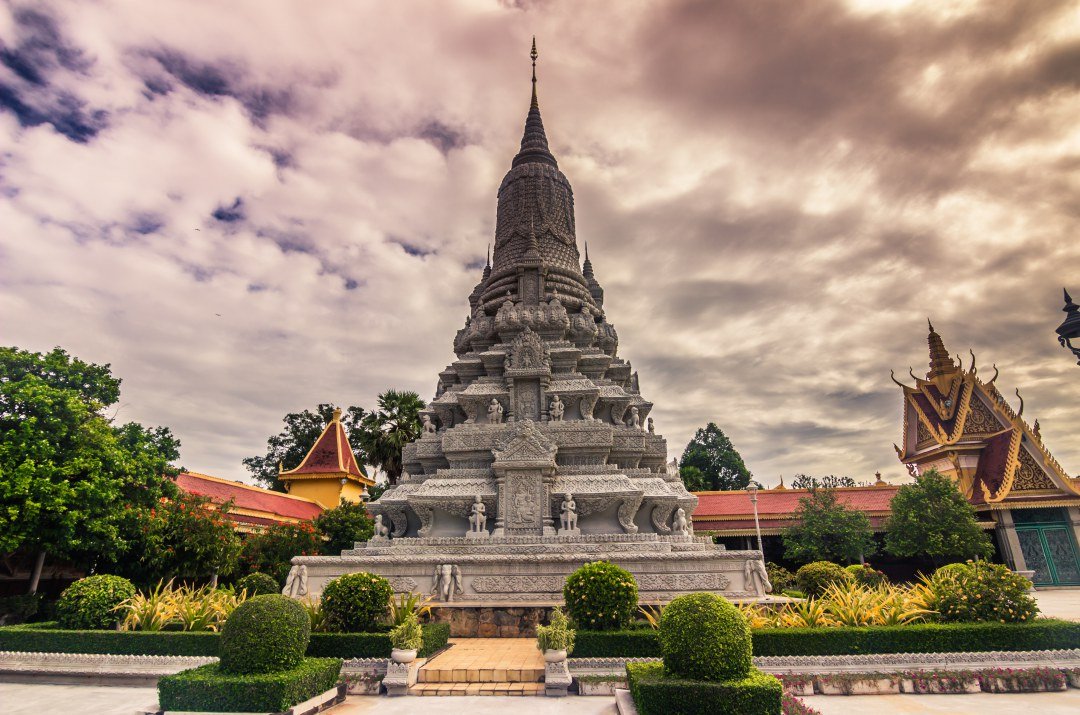 6 Silenced from the outside world the Silver Pagoda sits in the Royal Palace compound and is a classic example of Khmer architecture. This stunningly iconic temple houses an emerald Buddha along with the famous solid gold Buddha weighing in at 90kg and sits amongst the perfectly manicured Palace gardens. Flooring of over 5,000 silver tiles weighing 1 kilo each competes with the splendour of the many jewels and artefacts displayed here.
Phnom Penh

7 Phnom Penh just the name itself stirs the senses and memories of a bygone age. On the convergence of 3 rivers and exotic gateway to the religious complex of the world this vibrant capital with its colonial style mansions along tree-lined avenues still maintains its character and serenity. From its stunning Royal Palace and Silver Pagoda to the delightful park lined riverfront you cannot help but stay a while longer.
Sihanoukville 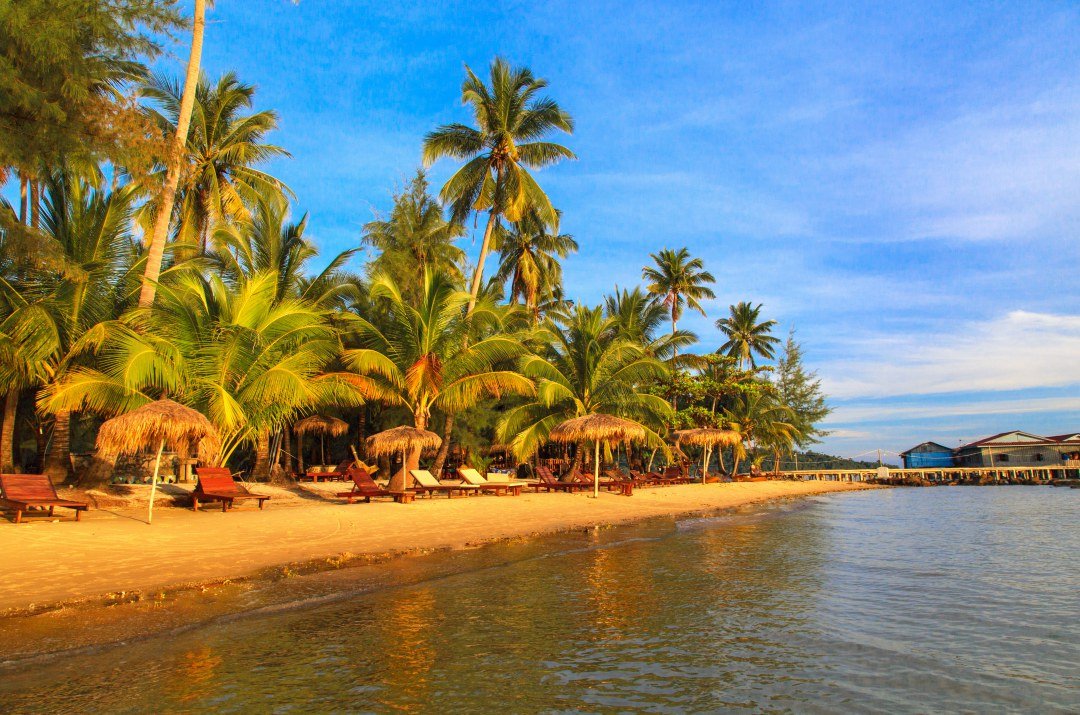 8 When you think of Cambodia do you think of beaches? Welcome to the National Park and its miles of sandy beaches on the edge of mangrove jungles and coconut palms. Once known as a bit of a party location and stop off rest point for backpackers it is fast becoming a popular destination for families too due to the emergence of resort hotels. Still unspoilt it offers a relaxing rest up point to recharge your batteries.
Tonle Sap 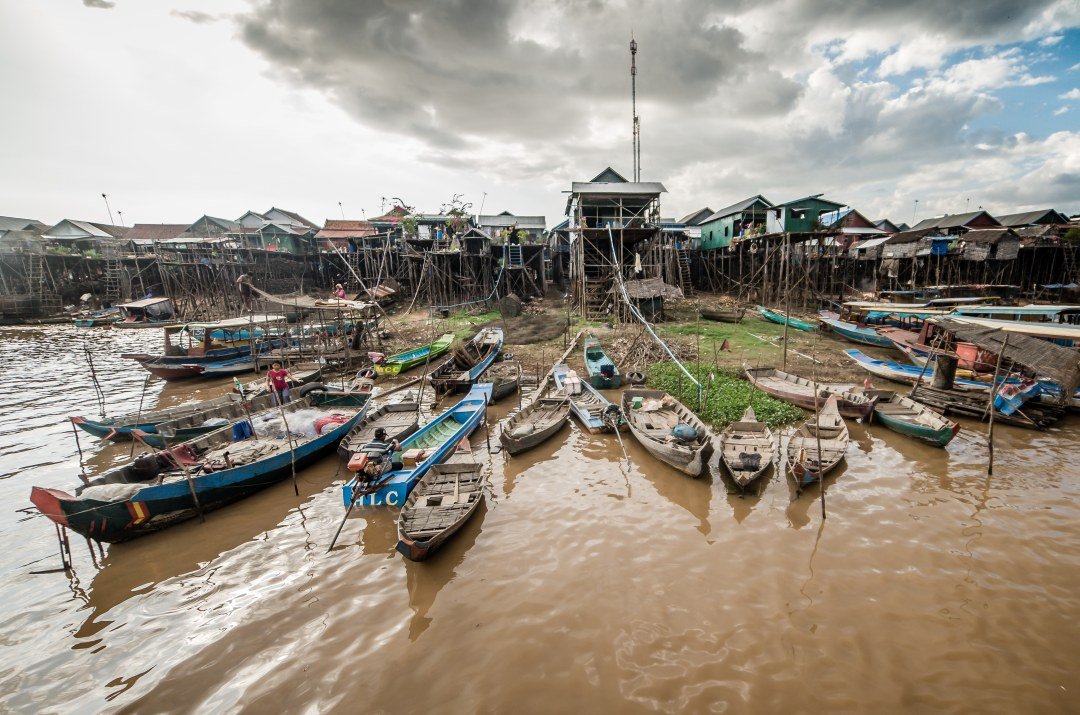 9 Floating villages and birdwatching are just some of the things on offer at Asia's largest freshwater lake. Its diverse and rich eco-system mean there are more than 200 species of fish and over 100 kinds of water birds living alongside turtles crocodiles otters and other wildlife. Custom tours of the traditional stilted houses lining the water and their residents lifestyles show how it is all interlaced with the life of this Great Lake.
Kratie 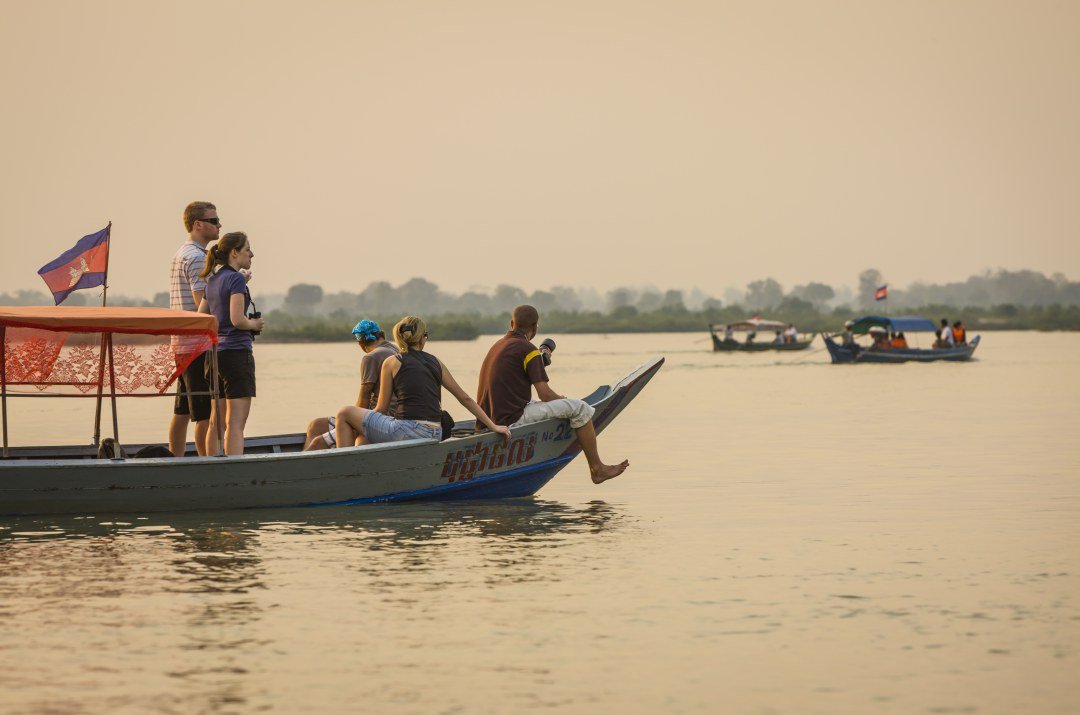 10 A hidden gem amongst the banana and palm trees this delightful small town is probably most famous for its dolphins. Considered to be one of the best places to see these remarkable but fastly becoming endangered creatures. On a sightseeing tour take the bike trail and explore the mangrove area and its many villages. Or relax amongst the mango trees on the beach and enjoy some bright smiles and warm hospitality always on offer here.

We visit Phnom Baset and Phnom Udong, the ancient Cambodian capital during the latter stages of the Khmer Empire and crowning site of many past kings.

Visit Kbal spean, the rivers in 1000 Lingas that made up of unique Lingas, beautiful temple of Banteay Srei and Banteay Samre temple

North of Siem Reap, visit the holy Kulen Mountains, also referred to as Phnom Kulen (“Mountain of the Lychees”) and CNN HERO.

Today we have a long journey west to the Beng Melea and visit Peoung Komnu that lies at the foot of the southern cliff of Phnom Kulen.

We head to the quiet town of Takeo before taking a short cruise to Angkor Borei town, located just a few kilometres from the Vietnam border.

We head south initially visiting the large hill of Phnom Chisor and we visit Tonle Bati where you can explore the small yet picturesque Angkorian temple of Ta Prohm.

Immerse yourself in the history of Cambodia’s sacred temples and ancient archaeological sites. Explore every corner of this UNESCO site.

Explore Phnom Penh on a private tour with a professional guide, you will learn more about its unique history and tour some of its most beautiful landmarks.

Full day private tour: Phnom Penh is the most interesting city in Cambodia. Join in on a chance to learn more and discover its unique heritage with your professional guide.