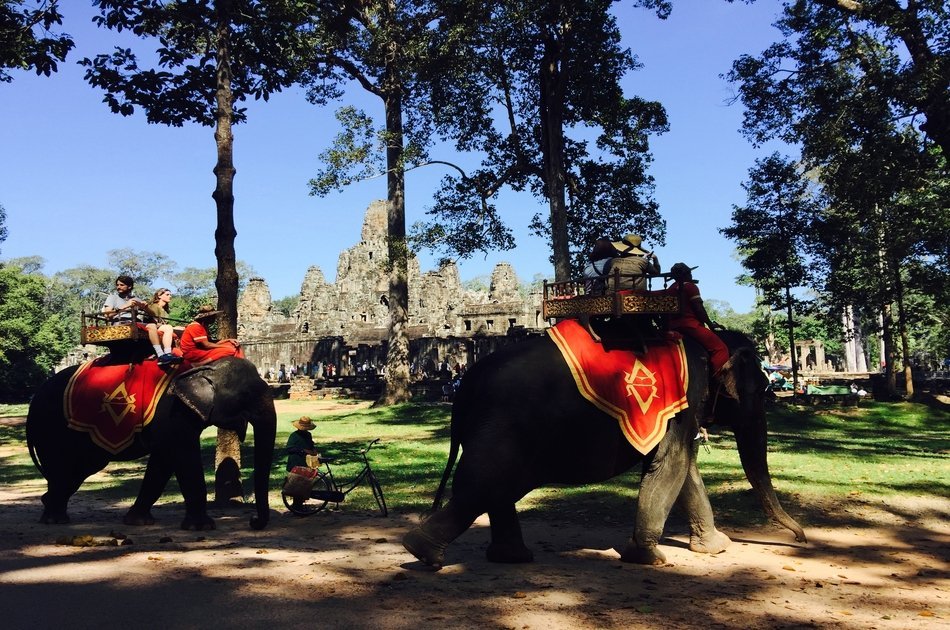 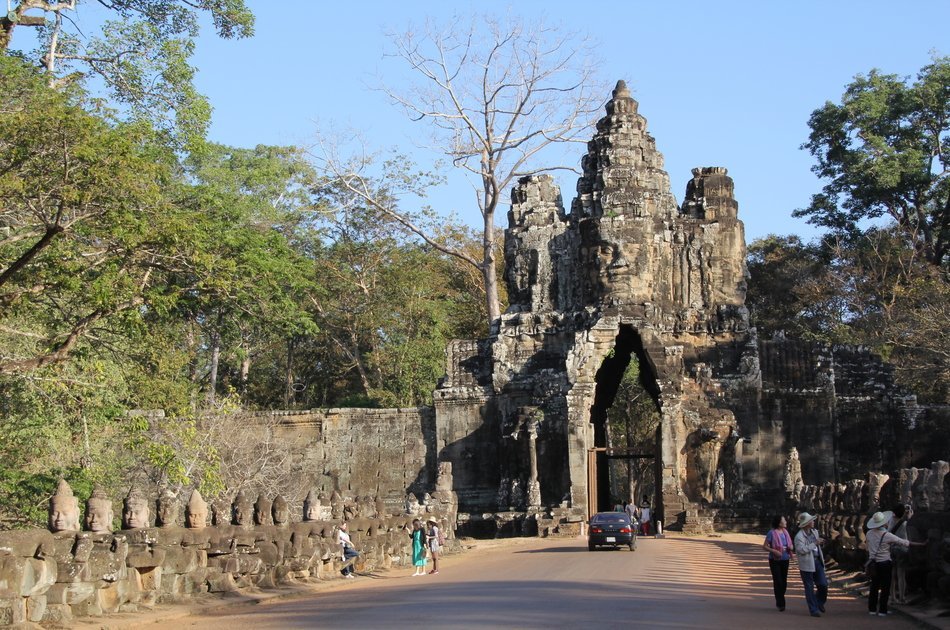 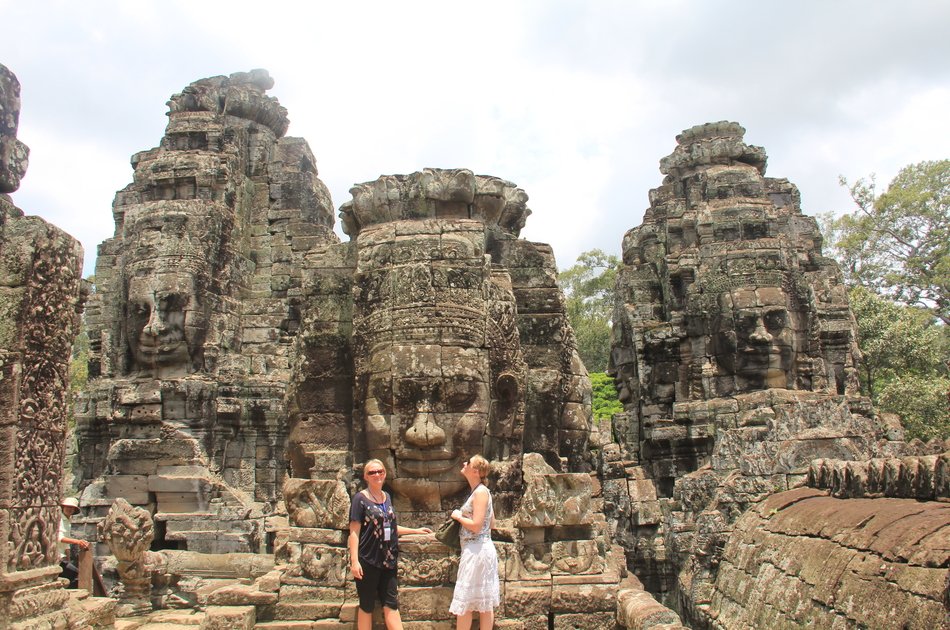 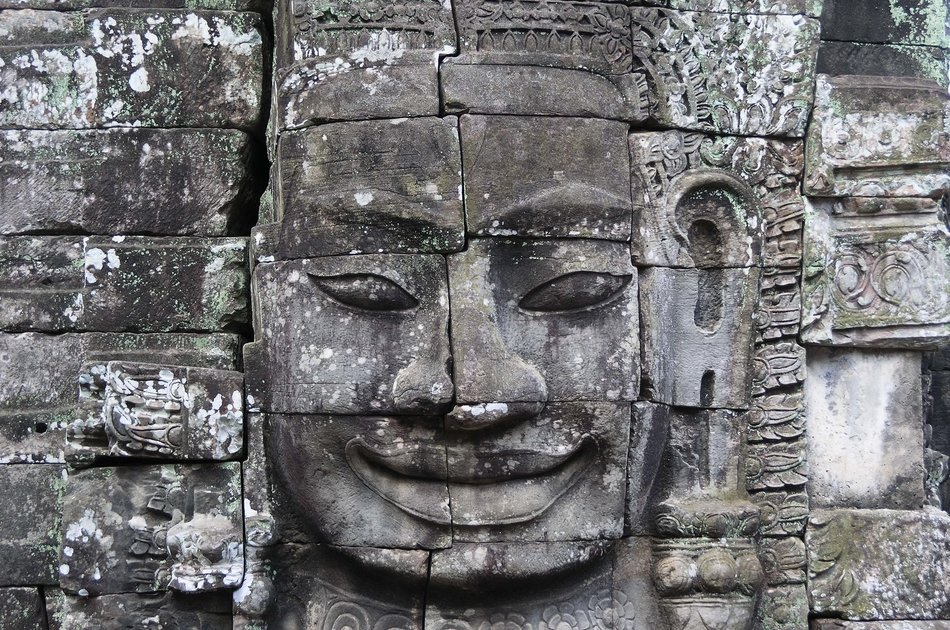 This tour starts a 08.30 with pick up from your hotel and meeting your tour guide before travelling to visit Angkor Thom which was the masterpiece of King Jayavarman VII.

Following the occupation of Angkor by the Chams from 1177 to 1181, the new king decided to build an impregnable fortress at the heart of his empire. The scale is simply staggering and you maybe overwhelmed by the audacity of Jayavarman on arrival at the city’s gates.

We begin with a visit to Bayon Temple located exactly in the centre of Angkor Thom, this is an eccentric expression of the creative genius and inflated ego of Cambodia’s most celebrated king. Its 54 towers are each topped off with the four faces of Avalokiteshvara (Buddha of Compassion), which bear more than a passing resemblance to the king himself. These colossal heads stare down from every side, exuding power and control with a hint of compassion, just the mix required to keep a hold on such a vast empire.

We continue to visit Terrace of the Leper King. This intricately carved platform was the royal crematorium and the statue that was originally thought to be the leper king is now believed to be Yama, the god of death.

We continue along the Terrace of Elephants, originally used as a viewing gallery for the king to preside over parades, performances and traditional sports.

At the southern end lies the Baphuon, once of the most beautiful temples at Angkor, dating from the reign of Uditayavarman 1 in the 11th century. It has undergone a massive renovation by the French and is now once again open for viewing.

We go local restaurant for Lunch.

We visit Ta Prohm of "Tomb Raider" fame. Ta Prohm has been abandoned to the elements, a reminder that while empires rise and fall, the riotous power of nature marches on, oblivious to the dramas of human history. Left as it was ‘discovered’ by French explorer Henri Mouhout in 1860, the tentacle-like tree roots here are slowly strangling the surviving stones, man first conquering nature to create, nature later conquering man to destroy.

We journey out to the Mother of all temples, Angkor Wat. Believed to be the world's largest religious building, this temple is the perfect fusion of symbolism and symmetry and a source of pride and strength to all Khmers. Built in the 12th century by King Suryavarman II, this is most famous temple at Angkor. Enjoy its magnificence in peace and quiet as we begin by unraveling the mysteries of the bas-reliefs that tells of tales from Hindu mythology and of the glories of the Khmer empire.

Highlights
Good to Know
Inclusions
Exclusions
Pickup and Drop-off
Pick up and drop off from your hotel in Siem Reap.
Know Before You Go
Customer Reviews
Add New Review
Add new review
No Discussion Comments found.