A tour to the Philippines to get your 'fill' of sun and adventure. A holiday to the Philippines or any of the islands around, is quite frankly, a vacation of a lifetime. There are so many variables available to let you have one day, a sun-soaked relaxing day and the next you can be trekking, diving, kayaking and kite gliding. At night go from having the most romantic candlelit dinners on the beach to the next night dancing the night away and doing karaoke.

Set apart from the Southeast of Asia, the Philippines is not only different geographically but also by its culture and spirituality. As a result of a 350-year rule by the Spanish, the people of Philippines have mostly devoted Catholics. Other influences of the Spanish rule are the old stone churches, the colonial architecture and the extravagant festivals or fiestas as they are known in the Philippines.

After the Spanish, came the Americans and their influence brought the widespread spoken English, fast food chains, and shopping malls! Even with all that influence from Spain and America, the Philippines has managed to remain unique.   Read More... 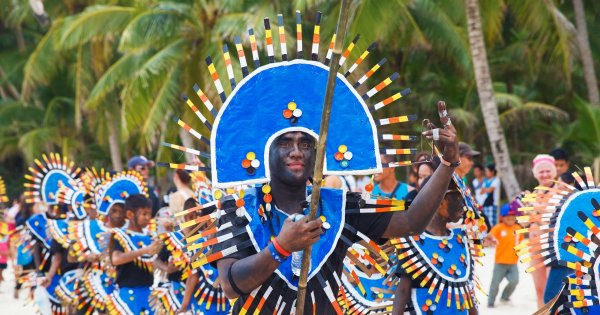 Did you know that the Philippines is called the Pearl of the Orient which might be because 3 of the largest known pearls in the world were found there, or that two of the biggest naval battles in history happened in the Philippine seas.

Take a sightseeing tour of the lake on an island which has a lake on an island; you need to see it! For the shopaholics, the Philippines also happens to have 3 of the top 10 largest shopping malls in the world. So, while on holiday, why not treat yourself to a private tour with a personal shopper!

And for something completely trivial, when Manny Pacquiao (their most famous boxer, now politician) fought any boxing match, the crime rate dropped to almost zero.

Top 10 Things to Do in Philippines

1 Carved out of a mountain by hand 1000s of years ago by the Ifugao people, using just the basic tools, it is incredible to see the rice terraces they created. It is mind boggling looking upon these fields climbing up the mountain ridge and it is not surprising that they are referred to as the 'eight' wonder of the world. Some locals are still working Rice fields here, so you get the whole experience on a private tour.
Chocolate Hills 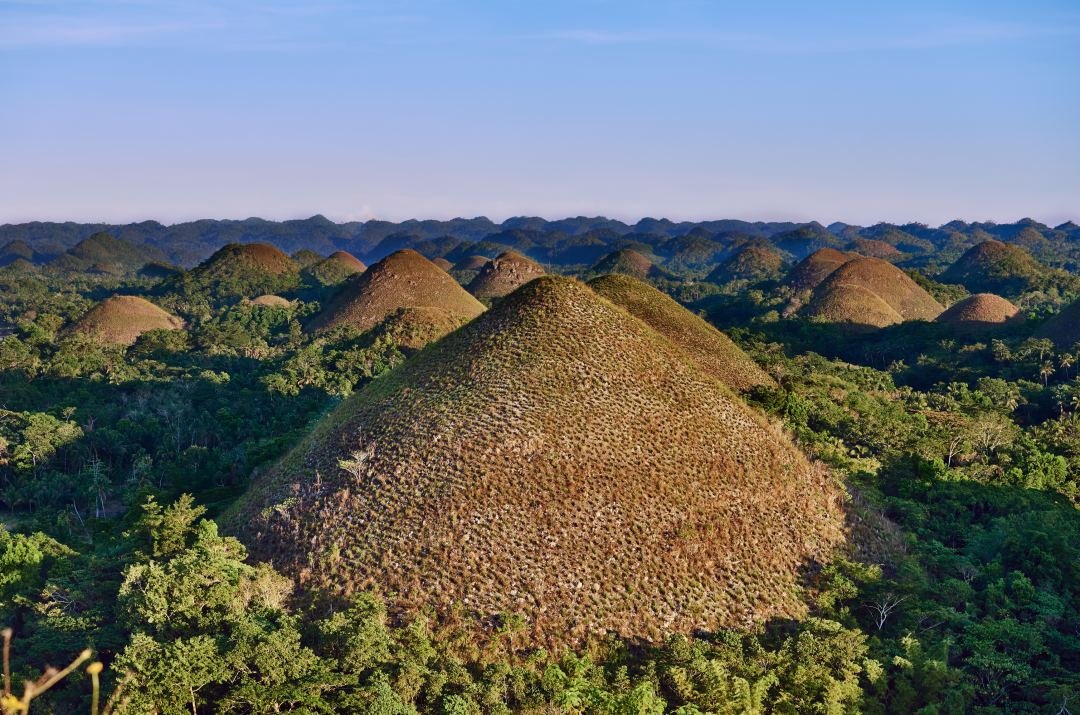 2 These are groups of unusually shaped hills found in the centre of the Bohol island. They get their name from when the grass on the hill turns from green to brown at the end of the dry season. A guided tour of these hills will bring you on treks up the hills which are not too high, thankfully. There are viewing decks scattered everywhere to get the most of the panoramic scenery. These hills are extraordinary and need to be seen
Tubataha Reef

3 This is a diving gem that has to be experienced. An escorted tour boat trip will bring you to different diving spots, each one brilliant in its own right. There is always the possibility to see small sharks and turtles during your dive. It is not only for divers as you get to see the most fabulous views on this trip and the water is so clear you can see lots of fish and turtles without getting into the water. It is heaven!
Taal Volcano and Lake

4 There are few places in this world where you will find an Island and lake that has another island on the lake with a lake on that other island, well confused about not, here you will see it! Apart from that, Taal volcano is the second most active volcano in the Philippines and offers the most picturesque and stunning views. A tour of these unique Islands, lakes and volcano will amaze and thrill you.
Rizal Monument

5 This monument is probably the most popular, most guarded, most visited and photographed place in Luneta, Philippines. It is a monument of Jose Rizal who died fighting for the freedom of the Philippines in the 1890’s and is a national hero. The monument has a bronze sculpture of Jose Rizal standing and other figures representing different things to do with family and resources which your private tour guide will explain in depth
Echo Valley Hanging Coffins 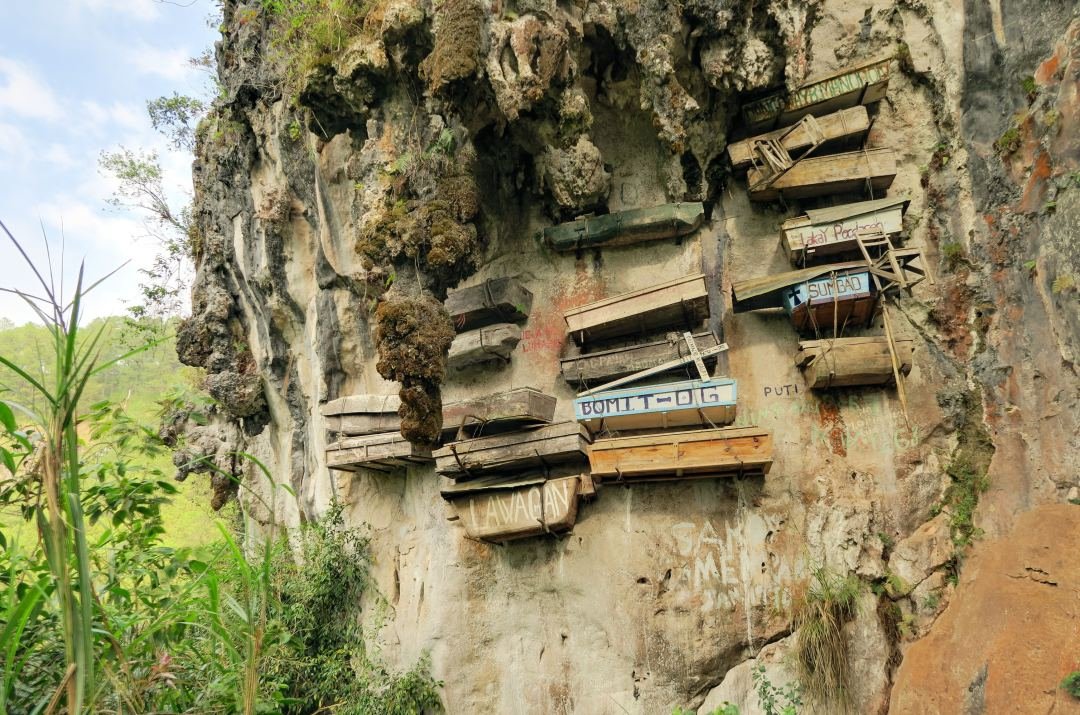 6 For something strange and unusual visit the popular attraction, hanging coffins of Echo Valley in Sagada. Members of the Igorot tribe have long had the tradition of burying their dead in coffins nailed to sides of the cliff face. A private tour will guide you to where the coffins hang and there you will also see funeral chairs that the bodies were originally strapped to when they died and before they were put into the coffin. Weird!!
National Museum of the Filipino People

7 This museum has such varied content that you will be in awe of your private tour guide because they know so much. On view are such things as the skullcap of the first inhabitant of the Philippines who lived around 24,000 BC, a wreck from the Spanish galleon (the San Diego) and its treasures that were salvaged like shell encrusted swords, coins and jewellery, prehispanic artefacts, musical instruments and exhibits of indigenous textiles.
Timbac Caves 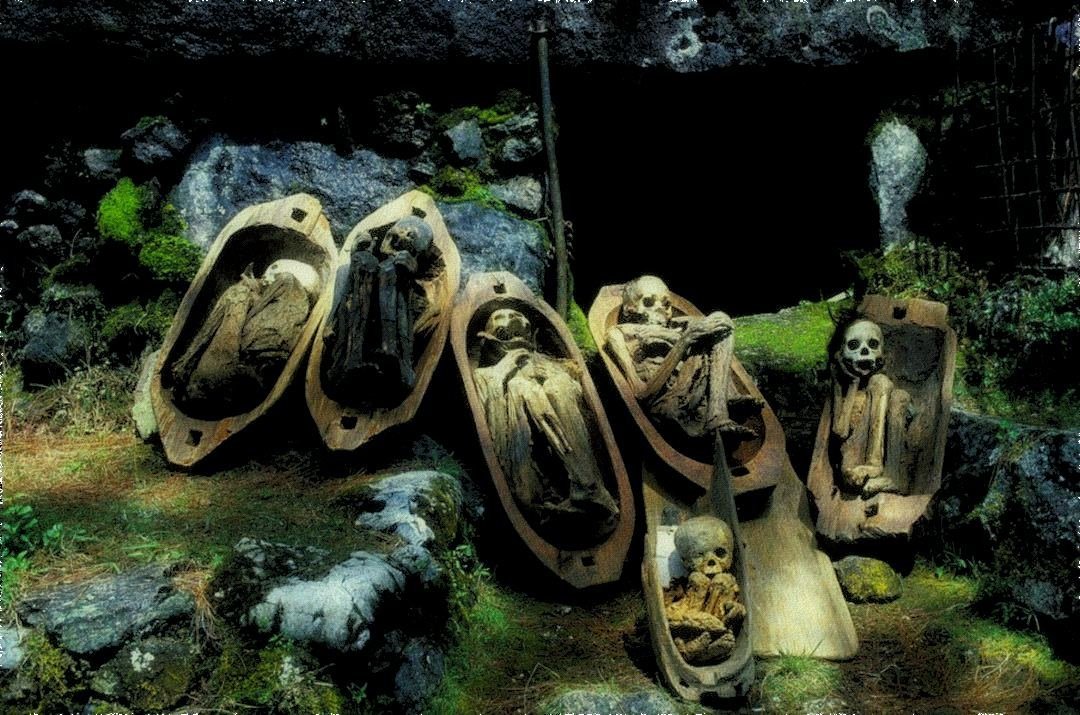 8 These caves are found around Kabayan and are the most sacred caves with locals customarily making offerings of gin before entering! In the caves, you find the best preserved Ibaloi mummies. A Guided tour of the caves and the area around them is intriguing especially when your tour guide gets the key from the caretaker and opens the coffins for you to see the mummies ranging from adult to small children. Another unique experience.
Basilica Minore del Santo Nino

9 This is a church located in the city of Cebu. It is the city’s holiest church and is the home of the revered Flemish statuette of the Christ child, known as Santo Nino, and dates back to Magellan’s time. A sacred image of the infant Jesus is said to be miraculous and has proven so with surviving many fires. On Sundays and Fridays, the Basilica is turned into a sea of pilgrims.
Callao Cave 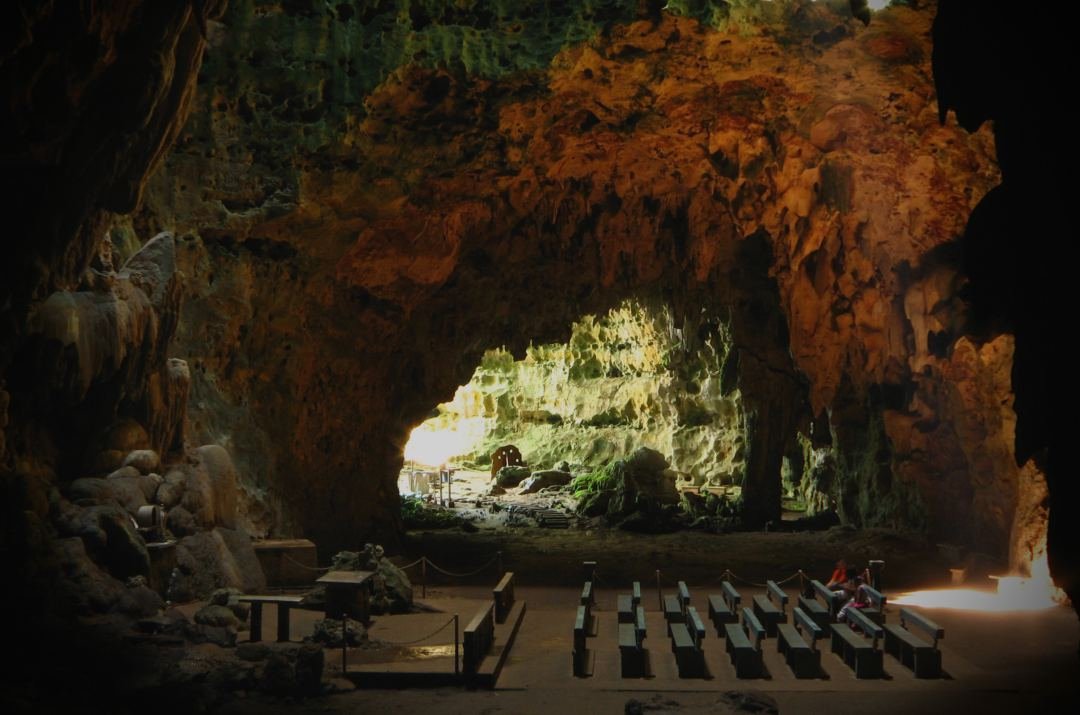 10 Callao Cave is made up of a complex of caves and the most accessible on has seven chambers. You can reach it by walking up 184 steps. There are several sinkholes illuminated in these chambers and one is home to a little chapel. While on a private tour here, you can also go and see the exodus of tens of thousands of bats pouring out of an inaccessible cave at dusk and fly over the Pinacanauan River.

Canyoning will start at Canlaob river downstream going to the pearl of the Kawasan Falls with its clear turquoise water.

With pick up from the Cruise Port, see the wonders of Manila on this entertaining and informative Private City Tour with knowledgeable English speaking driver and guide

Puerto Princesa Subterranean River National Park is a World Heritage Site by UNESCO. The Worlds Longest Navigable Underground River and Now One of the 7 wonders of Nature.

With a Private Tour travelling in luxury, you can unlock Manila City’s many treasures like Manila Cathedral, Fort Santiago and San Agustin Church to name but a few.

Immerse yourself in the land and culture of the Ifugao. Trek from Banaue and visit four Ifugao villages. Hike through spectacular rice terraces, mountains and waterfalls.

Enjoy an 8-hour adventure trek of the Taal Volcano, crossing to Volcano Island by boat, with optional horse riding activities on arrival.

Join this full day tour from the Cebu city center to Oslob, to interact with one of the largest friendly fish called Butanding.

A customised 12-day island hopping tour starting at Manila. Fly to Cebu and from there see Mactan and Coron Island before heading to Puerto Princesa and back to Manila.

Enjoy the big and small lagoon’s tranquil turquoise-green waters of its orchid-lined limestone walls, showcase a kaleidoscope of marine life!

El Nido has an abundance of pristine islands and beaches waiting to be discovered! On this tour you will see some of the most beautiful coves in Bacuit Bay.

Hidden Beaches Tour is truly a world famous location. With the most amazing beaches, this is a tour that should not be missed!

Cadlao Lagoon is one of the best lagoons in the group of islands around El Nido. This tour is every photographer's paradise!

Beautiful Banol Beach with its short stretch of white sand and crystal blue water is the perfect place to stop over for some lunch.

The mesmerising neighbouring islands of Malcapuya, Banana and Bulog Dos are home to some of the most beautiful waters and beaches in the Coron Palawan.

This wet and wild tour takes you to the west side of Sarangani province. Walk through the turtle sanctuary and find turtle eggs.

Visit Pass Island and witness its stunning and pristine beach with amazing reefs and see all the colourful fish. Don't forget your camera to make some beautiful memories.

On your way to the area of the underground river, you will have a great chance to be amazed at the splendid top view of Ulugan Bay.

Shared Tour Manila
Filter Results
Categories
Latest Reviews
A Tour to The Philippines To Get Your ‘Fill’ Of Sun And Adventure
5 out of 5 based on 1 reviews.