Enjoy the Capricious and Captivating Capri on Private Sightseeing Tours

In the Bay of Naples, Italy is the very stylish Island of Capri which is known for its unique beauty, myths and glitz. An idyllic destination to stay or visit on private sightseeing tours.

The Island is small but compact, only six kilometres long and just over two kilometres in width. The rugged mountain landscape is an extension of the Amalfi peninsula upon which Sorrento lies.

The two towns on the Island are Capri in the island centre and Anacapri which is located on a plateau above Capri. Anacapri is the quieter and more normal of the two towns, it is also slightly cheaper to stay here. Capri is the lively town where even the rich and famous enjoy staying.

When you visit this Island, you will find the likes of spectacular grottos and coves, Roman ruins and impressive piazzas, designer boutiques and cafes ideal for people watching.

There are many exciting tours to the Island but also when you are on the Island. The boat tours to and from the Island are relaxing and leisurely with beautiful views. On the Island, along with sightseeing tours, there are excellent hiking tours, walking tours and scooter tours to name just a few.  Read More...

Of all the amazing sights to see on the Island of Capri, a guided boat tour to the Blue Grotto should be top of your list. This amazing flooded cave with an opening to the sea looks to be lit up inside, but it is the reflection of the sunlight that makes it appear this way.

The best place for panoramic views is from Monte Solaro. There is a chairlift service from Anacapri which will bring you to the top and the views will take your breath away.

For activity junkies, sightseeing addicts or sunbathing worshippers, the Island of Capri caters to all.

Top 10 Things to Do in Capri 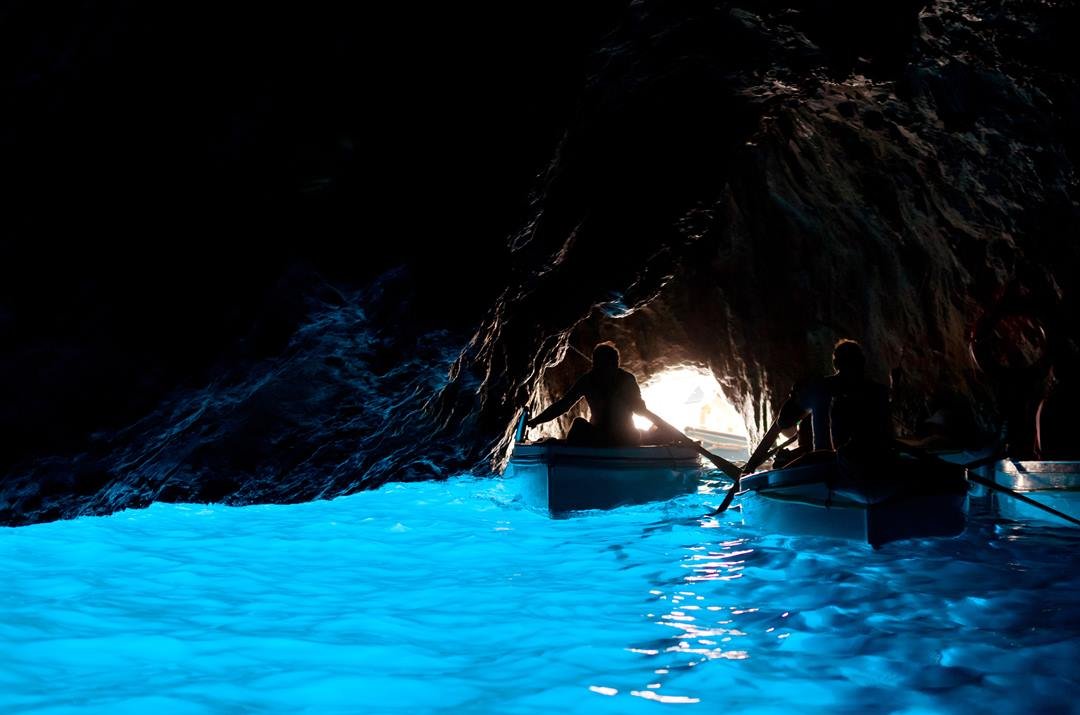 1 The most popular tourist attraction on Capri, the island, is the Blue Grotto. It is a natural cavern that is 25 meters wide and about 60 meters long with a tiny entrance of less than a meter high. Once inside the cave, it looks lit up by blue lights, but it is the reflection of the sun that gives this impression. The boat tours to here are on wooden row boats so that you can lay back and not hit your head when entering!
Faraglioni 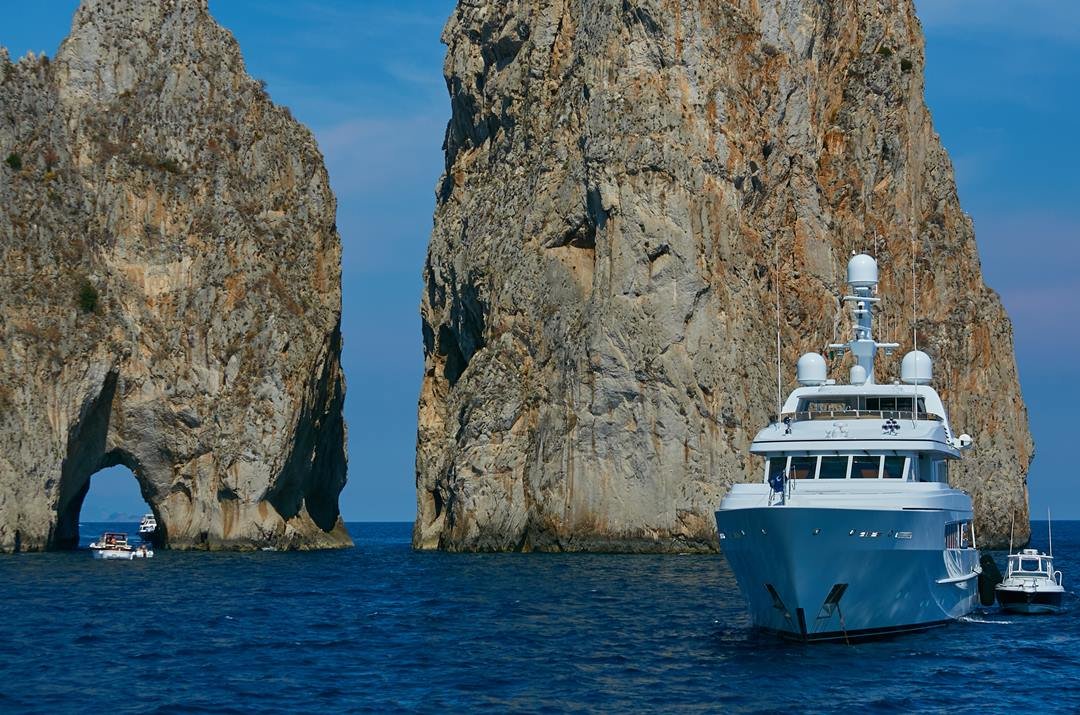 2 The blue grotto maybe the most popular attraction but the Faraglioni rock formation are the most iconic sight on the Island of Capri. They are three towering rocks jutting out of the Mediterranean Sea off the coast of the Island. On a boat tour, you get to sail through the archway formed n the center of one of the rocks called Faraglioni di Mezzo. It is good luck to kiss your partner as you pass through!
Villa Jovis 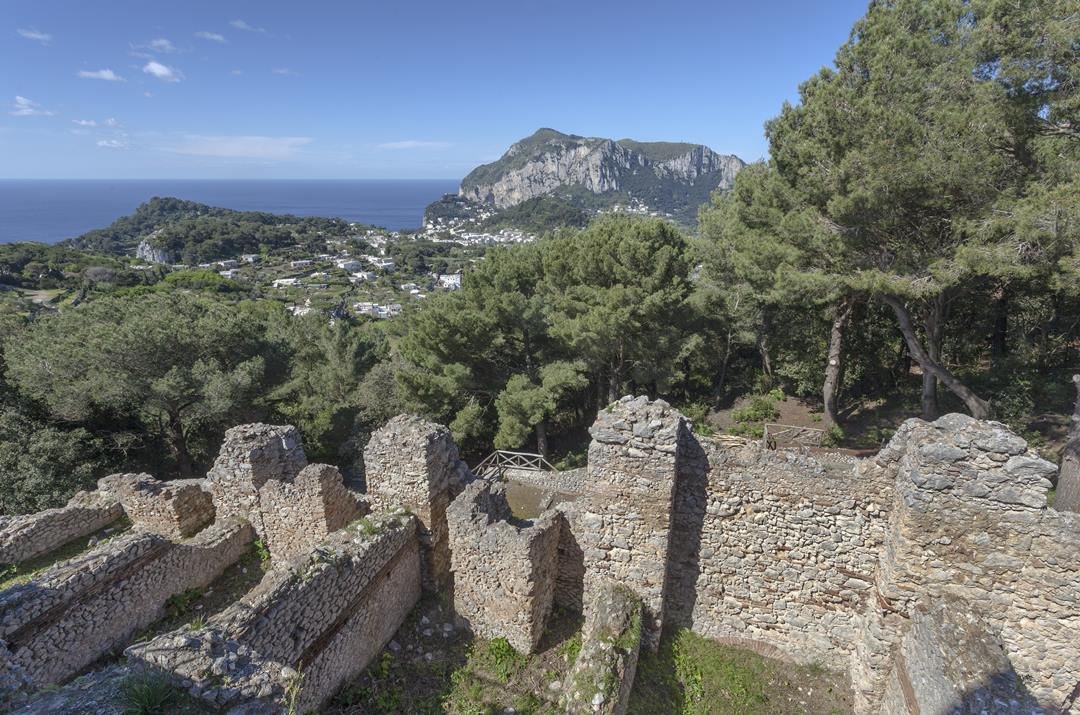 3 On a guided tour visit the Roman ruins of Villa Jovis which was home to the Emperor, Tiberius. It was to this villa that Tiberius retreated in 27 AD and it was from behind the secluded walls of this villa that he governed the Empire until his death a decade later. On your tour, you are given a wealth of information about the alleged goings on here and some will make your hair stand on edge if to be believed!
Monte Solaro 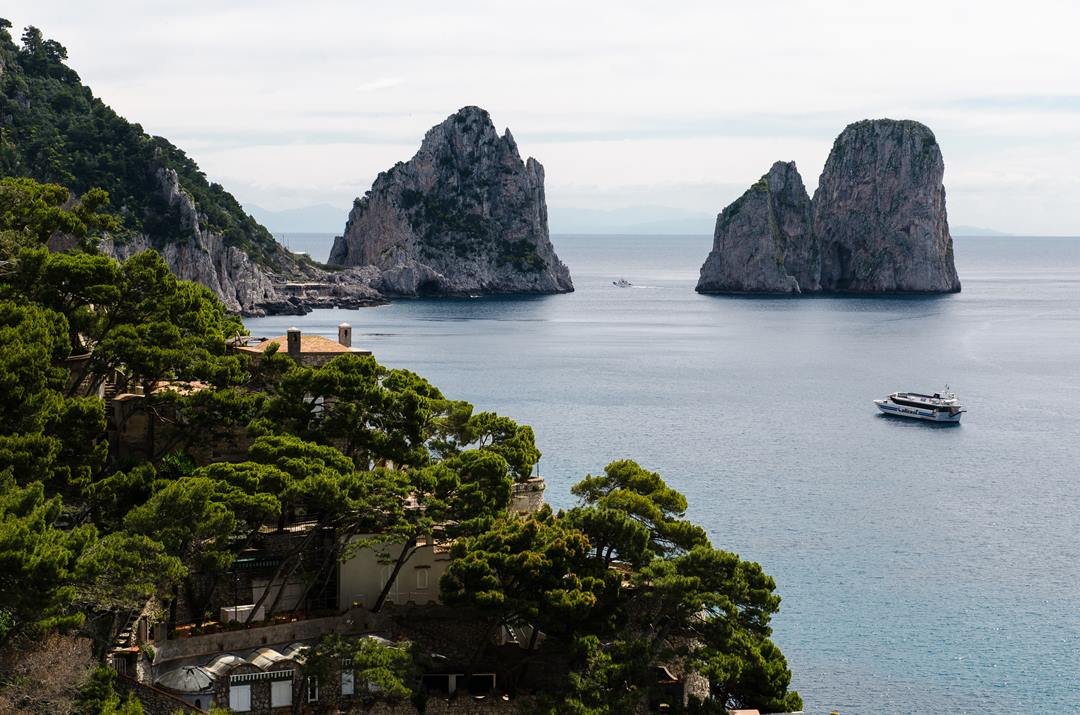 4 There are two ways to reach the top of Monte Solaro where you get to experience the most amazing panoramic views. A Chairlift leaves from Piazza Vittoria and reaches the top in 12 minutes. Alternatively, you get to the top on foot. The best way is on an organized hiking tour and can take around an hour leaving from the town of Anacapri. It is an uphill climb but worth the effort when you see the views.
Villa San Michele 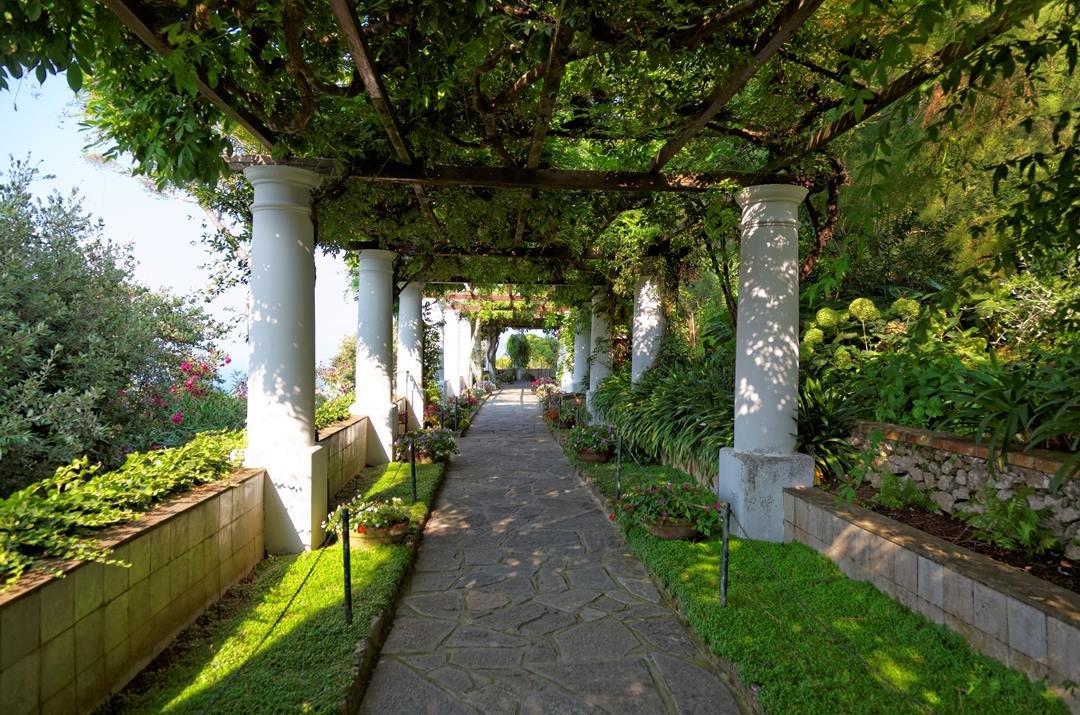 5 Take a guided tour of the Villa San Michele which is in Anacapri. This was Axel Munthe’s, a Swedish Physician, dream home and he built it in 1885 on the ruins of an ancient chapel devoted to San Michele. There are displays of ancient artifacts, either found in on the Island by Menthe or donated by friends, to be seen on tour. In the gardens, there is Roman paving, a granite Sphinx and much more.
Capri Philosophical Park 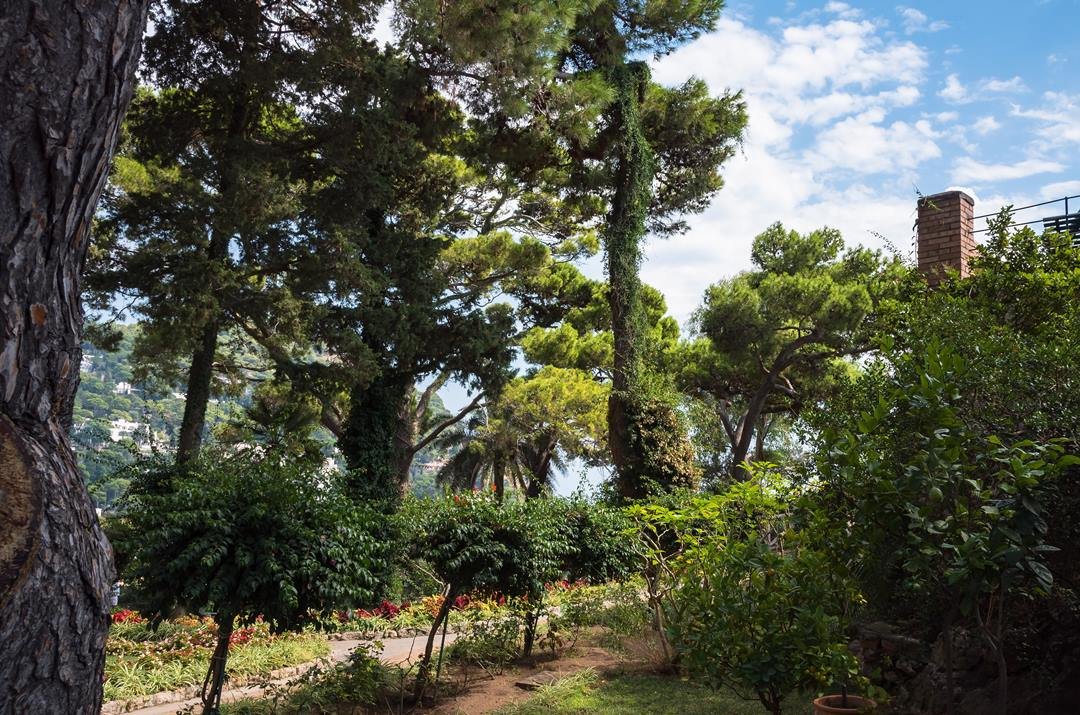 6 The Capri Philosophical Park is located near the town of Anacapri. This is a tranquil and unique place to visit when in Capri on a sightseeing tour. Gunnar Adler-Karlsson, a Swedish economist, built and designed this garden and it combines the depth of Eastern and Western thought with the beauty of nature. There are three pathways to walk and explore; Idealism, Realism and Wisdom. It is a great place for reflection.
The Lighthouse of Punta Carena

7 Possibly among the best places to take a sunset sightseeing tour is the Lighthouse of Punta Carena. This lighthouse was built in 1866 and is among the most important for guarding over the Tyrrhenian Sea. After Genoa, it is the second tallest lighthouse in Italy and dominates the island of Capri on the Southwestern coast. To experience a sunset here is like no other, especially with an aperitif in your hand.
Anacapri 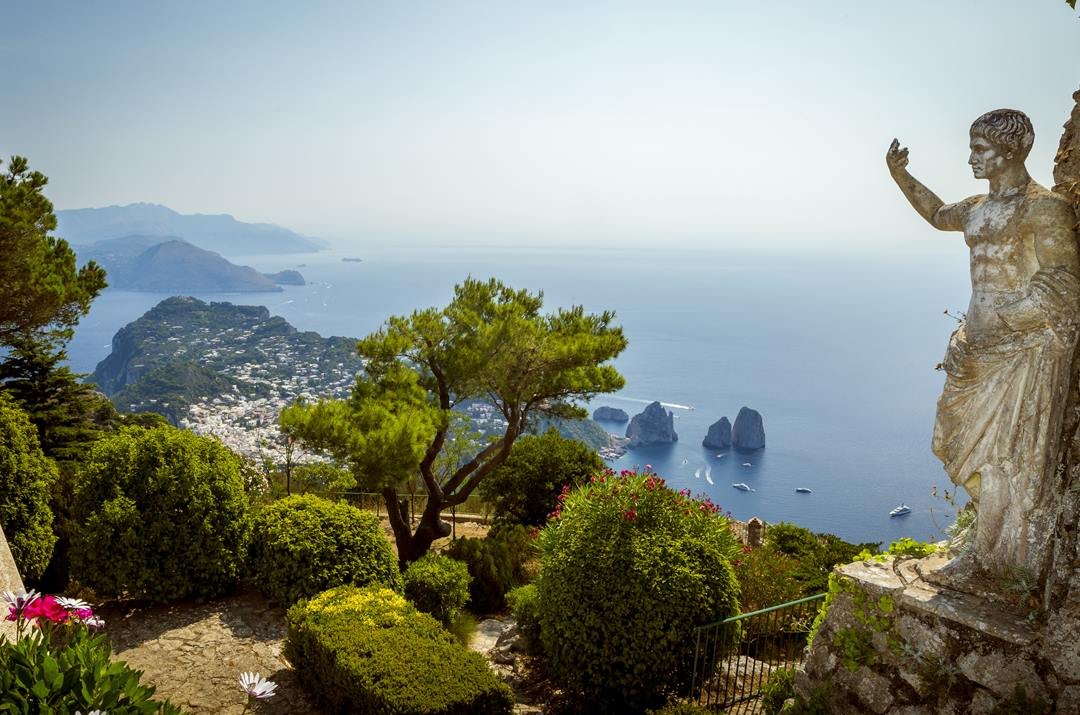 8 Anacapri is a town situated on top of a plateau and a beautiful place to see on a sightseeing tour or to stay for a night or more to get away from busy lives. The town itself is very picturesque and charming with many interesting places to visit such as the 1510 Santa Sofia church or the Casa Rossa built by a veteran of the American Civil War with a museum inside displaying items found in the Blue Grotto.
Certosa di San Giacomo

9 In 1371 was the founding of The Certosa di San Giacomo which was built on land given by Queen Giovanna 1st of Angio. It is the oldest historic building on the Island of Capri. It is made up of three main buildings, a convent and pharmacy and women’s church. This is a very tranquil and enjoyable place to visit on a guided tour and there are many fascinating things to learn and see.
Boat Tours to and from Capri 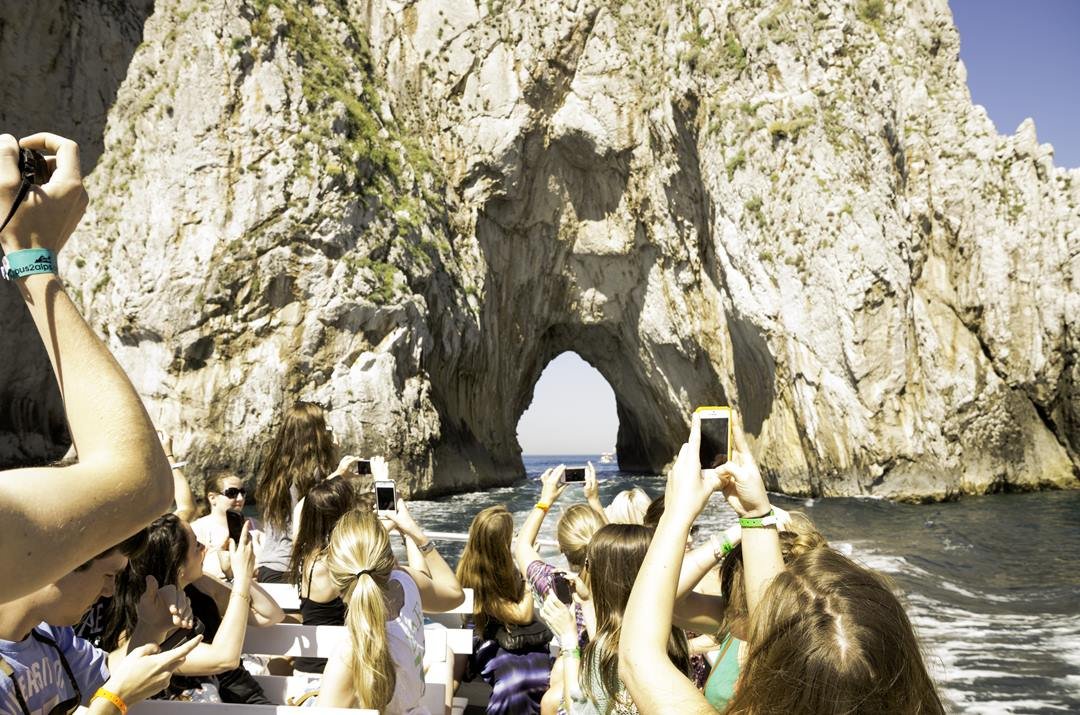 10 There are many boat tours which can be done from the Island of Capri which will bring you to many different locations where you can swim, dive or snorkel. Coves and bays which can only be reached by boat tours. These tours are very relaxing and leisurely but more importantly very enjoyable for young and old. It the idyllic way to see the island from a different perspective.

The best time and busiest time in Capri are not necessarily the same depending on the individual. For sightseeing tours, hiking, walking and shopping, the months of September to October are perfect especially when you can be lucky with the weather being mild and sunny. The busiest time of the year is June to early September due to these months being hot and popular with the A-listers from all over the world.

The prices on the Island of Capri can be high at certain times of the year, however, there are always cheaper options to be found if you do some research. Staying in Anacapri is cheaper. Peak season, a nights stay in a budget hotel will start from US$100. Dining out can be cheap and delicious if you are not looking for 5-star dining. An evening meal starts from US$10. The cost of private tours varies a lot with the seasons.

When visiting the Island of Capri, it is advisable to book early in advance your accommodation. Alternatively, should your plans involve doing a day trip to Capri during peak season, you need to book this with a tour operator in advance too. Drink bottled water to be on the safe side when in Capri. Be aware of your surroundings when in crowded areas, as they are in their element then. When on organized tours, do not stray from the group. 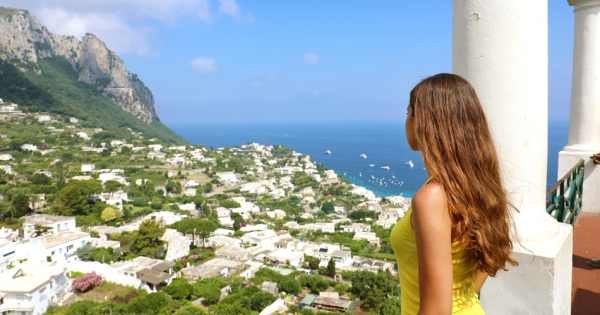 Visit the jewel of the Mediterranean and the beautiful Capri! 3 Nights and 2 days, explore at your own leisure and soak up the amazing views.