Private Guided Tours of Teotihucan for All or Any Archaeological Fan

To go on a private guided tour of Teotihuacan is a must for all or any archaeological fan for this is a large archaeological interconnected site located in the northeast of Mexico City.

Now Teotihuacan is one of the world’s greatest archaeological sites, but it was once regarded as the most remarkable cities of the ancient world. It was the most populous and largest religious and political centers of the Americas.

Teotihuacan and its origins are still a mystery even to the best archaeologists in the world. All that is known for certain is that the people who lived here in the heart of the Valley of Mexico made milestones in all aspects of arts and science. They also constructed some of the world's best and extraordinary monuments.

The Archaeological sites of Teotihuacan have the longest history in Mexico of exploration. During 1884 the first excavation began after surveys were done in 1864. There were restorations done on some of the monuments from 1905-1910.  Read More... 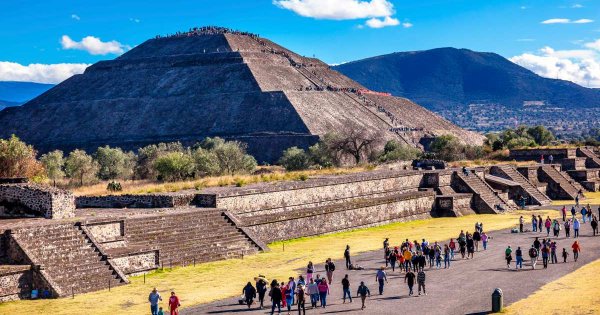 Of all the fabulous sights to see on a sightseeing tour of Teotihuacan the Pyramid of the Sun is the most amazing.

This largest structure on the site is thought to have been built around 200CE, it is also among the largest in Mesoamerica.

Other interesting aspects of this complex is the Avenue of the Dead which connects the Temple of Quetzalcoatl and the Pyramids of the Moon and the Sun.

Everyone should make a point of visiting the Museum of Teotihuacan Culture when here to see the many artifacts that were excavated over the years.

Top 8 Things to Do in Teotihuacan

Pyramid of the Sun 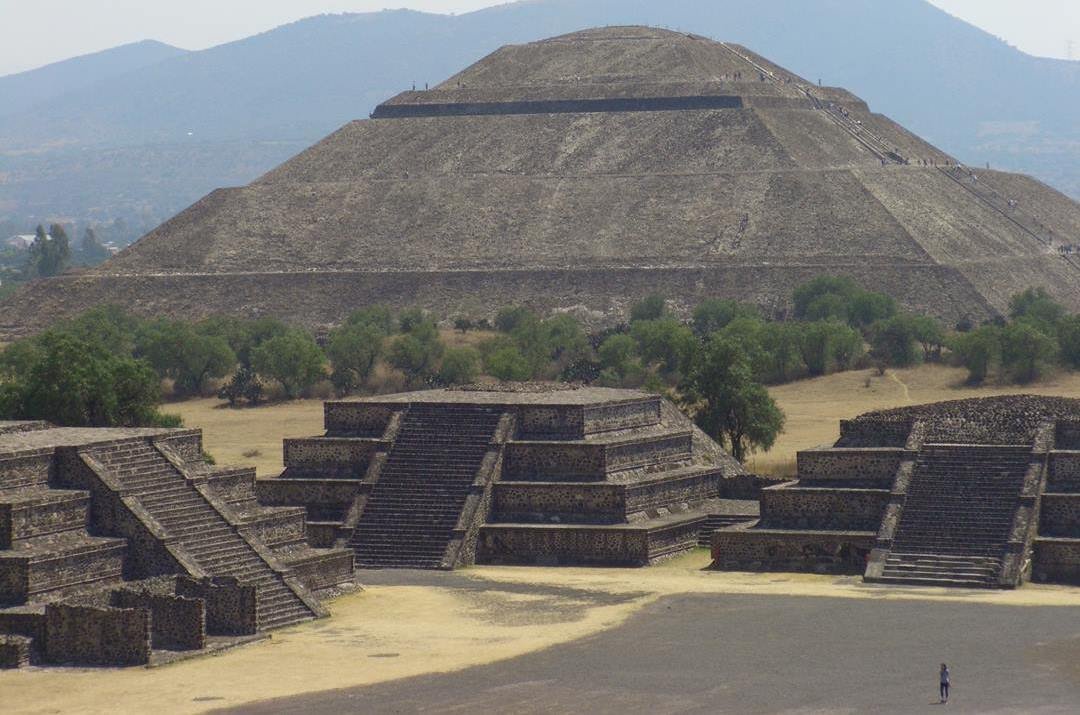 1 Possibly the largest structure in the Western Hemisphere of this type to take a guided tour is the Pyramid of the Sun. It is the stand-out attraction in Teotihuacan for its size and location. There are over 200 steps built into the pyramid which you can climb to reach the top. It is worth all the effort and energy because when you are at the top, there are spectacular views. The history you learn from the guide is fascinating.
The Pyramid of the Moon 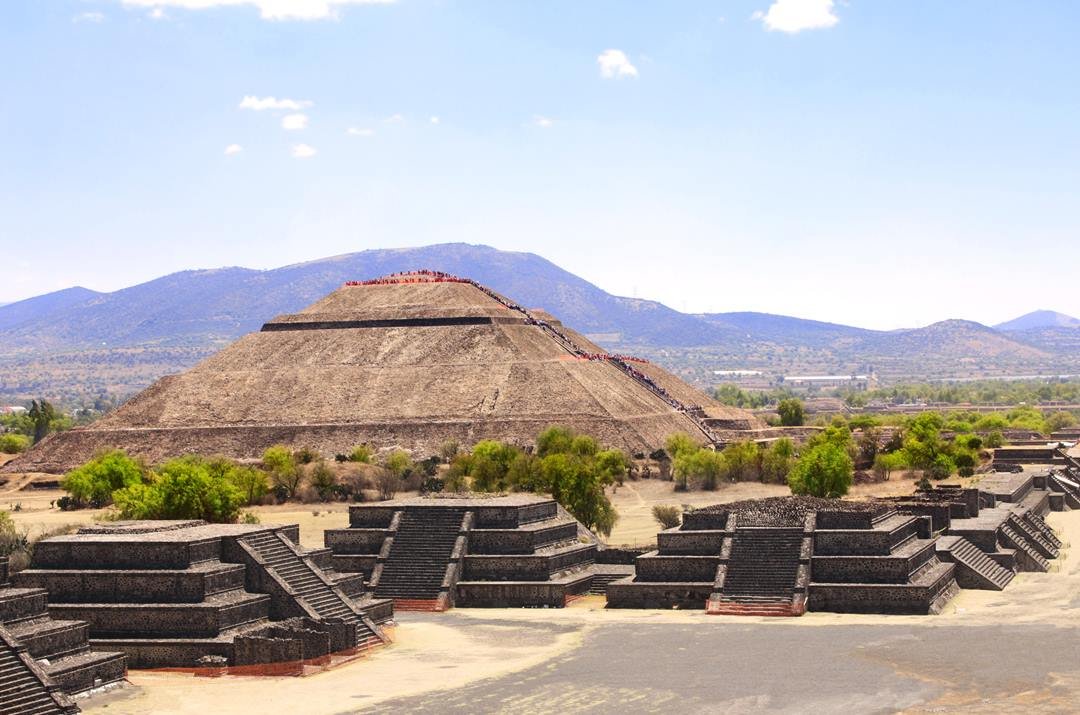 2 The second largest pyramid in the archaeological complex of Teotihuacan is the Pyramid of the Moon. It was named by the Aztecs when they discovered Teotihuacan hundreds of years after the first inhabitants left the area. This pyramid and its plaza were the religious and sacrificial centre. The tombs found here had human and animal sacrifices. There is plenty to see and learn about this Pyramid to keep you enthralled in a guided tour.
Archaeological Zone of Teotihuacan 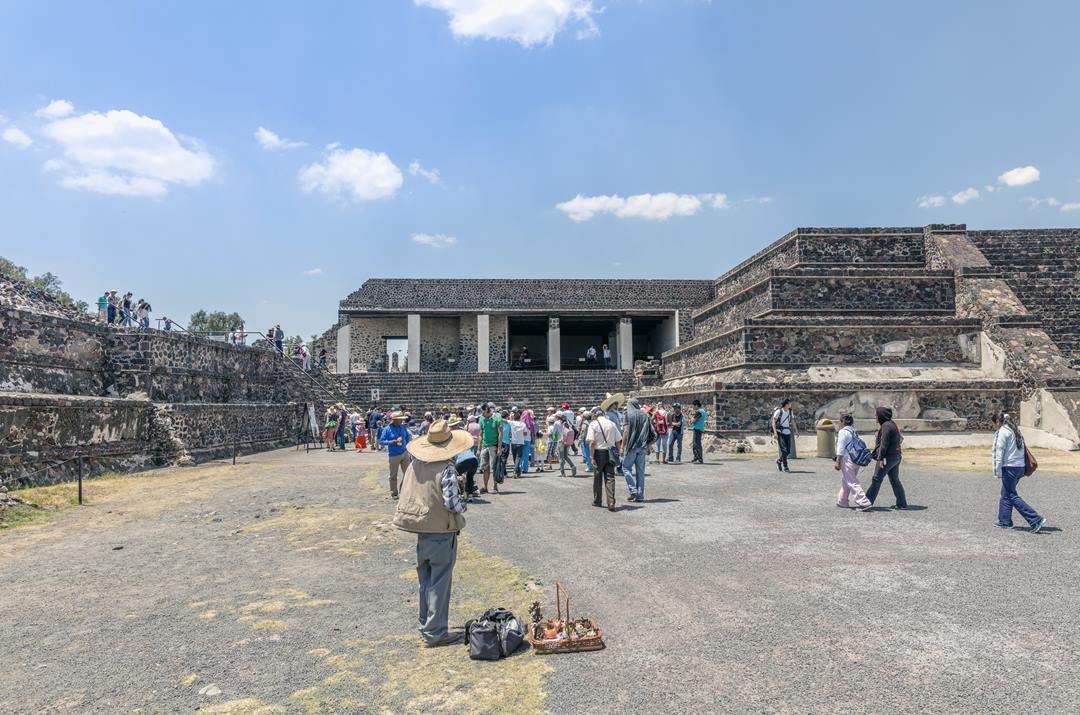 3 A full and varied guided tour to take when in Teotihuacan is that of the Archaeological Zone. It is in this zone that you find the main area of Monumental buildings like the Temple of the Feathered Serpent, La Ciudadela and the Causeway of the Dead. Also in the zone are two museums that specialize in the culture and murals. Other interesting areas is the garden south of the San Juan River.
Temple of the Featured Serpent 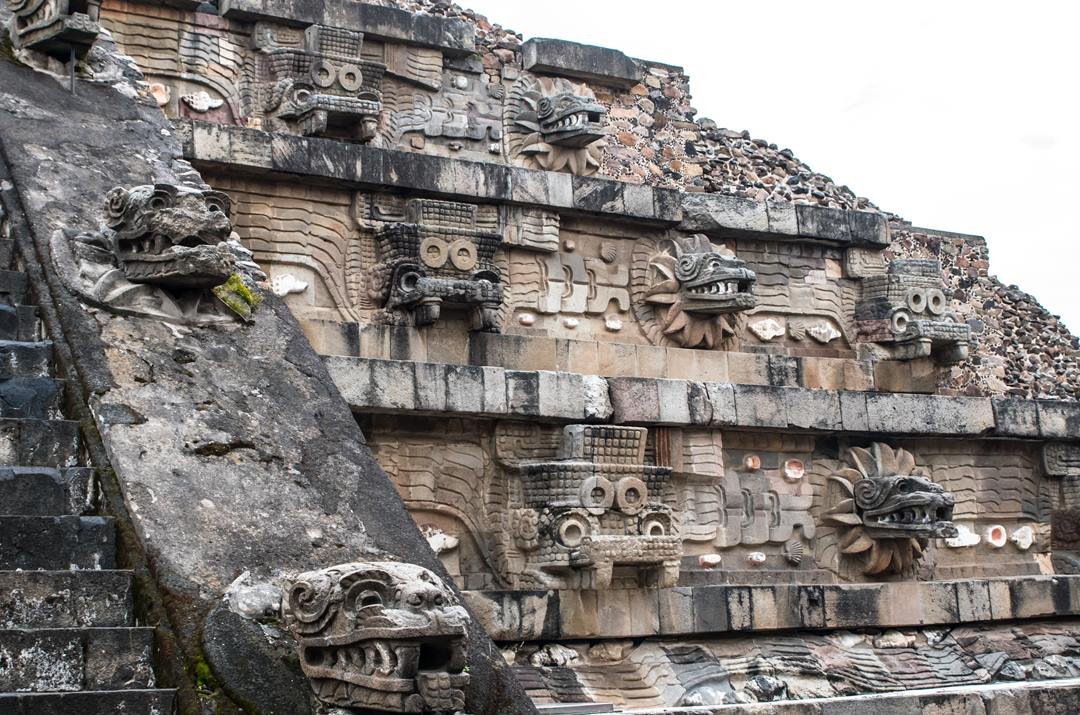 4 The Temple of the Featured Serpent is the smallest of the pyramids found in Teotihuacan. It is from the early third century and it dominates the Citadel. This pyramid once had a temple on top and was covered with sculptured feathered serpents with unusual google-eyed figures on their backs. It is a thoroughly interesting place to visit on a guided tour as is everything you see in Teotihuacan.
The Museum of Teotihuacan Culture 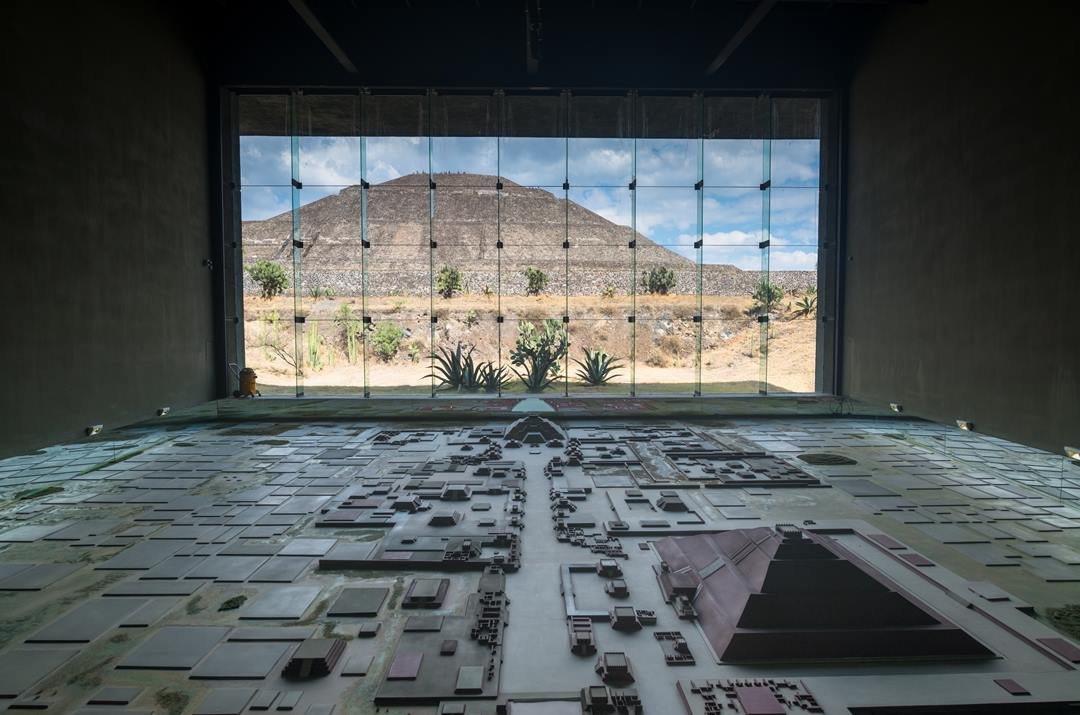 5 Take a guided tour of the Museum of Teotihuacan Culture. This museum was fist opened in 1963 in a specially constructed building. The Museum shows how the Teotihuacan Culture had such an influence in Mesoamerica and gives reasons as to why no one knows why the city was abandoned. There are excellent artifacts, sculptures, and arts front Classic period to be seen and admired.
Quetzalpapalotl Community Museum 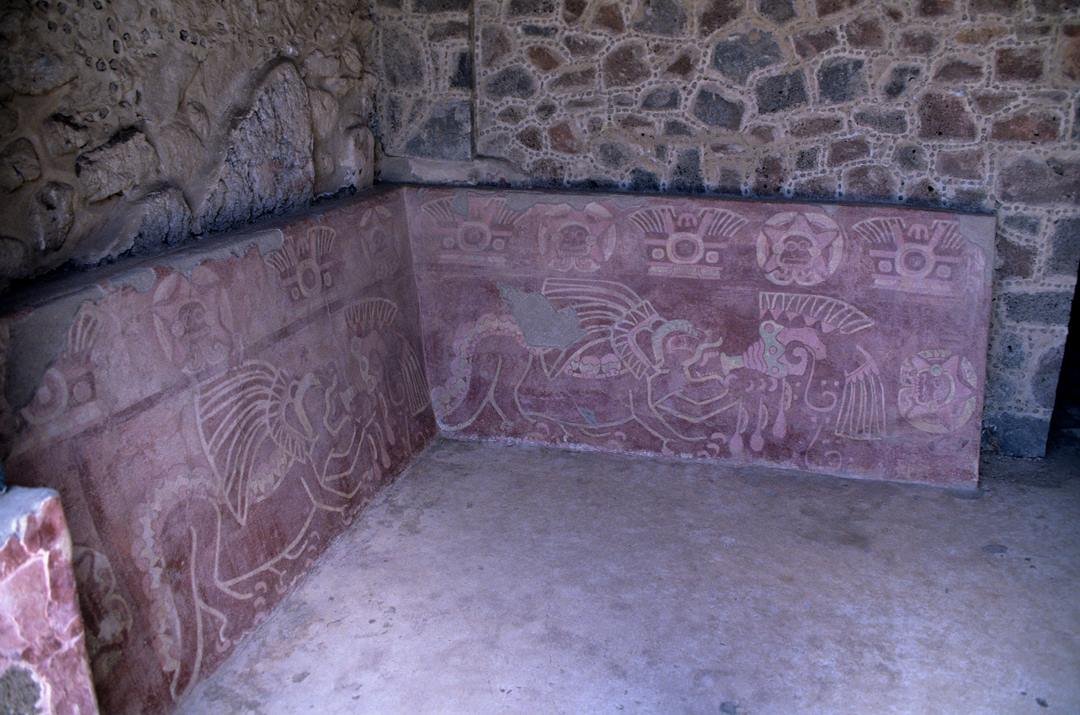 6 This is another museum that is located in Teotihuacan, in its City Hall. This municipal museum was opened in 1998 and its aim is to create a platform of exhibitions which are permanent on the various materials and pieces from the oldest past of the Teotihuacan. There are exhibits on Pulque, Prehispanic pieces, archileros and old photos. There are various temporary exhibits throughout the year too to see on guided tour.
Palacio de Tetitla & Palacio de Atetelco 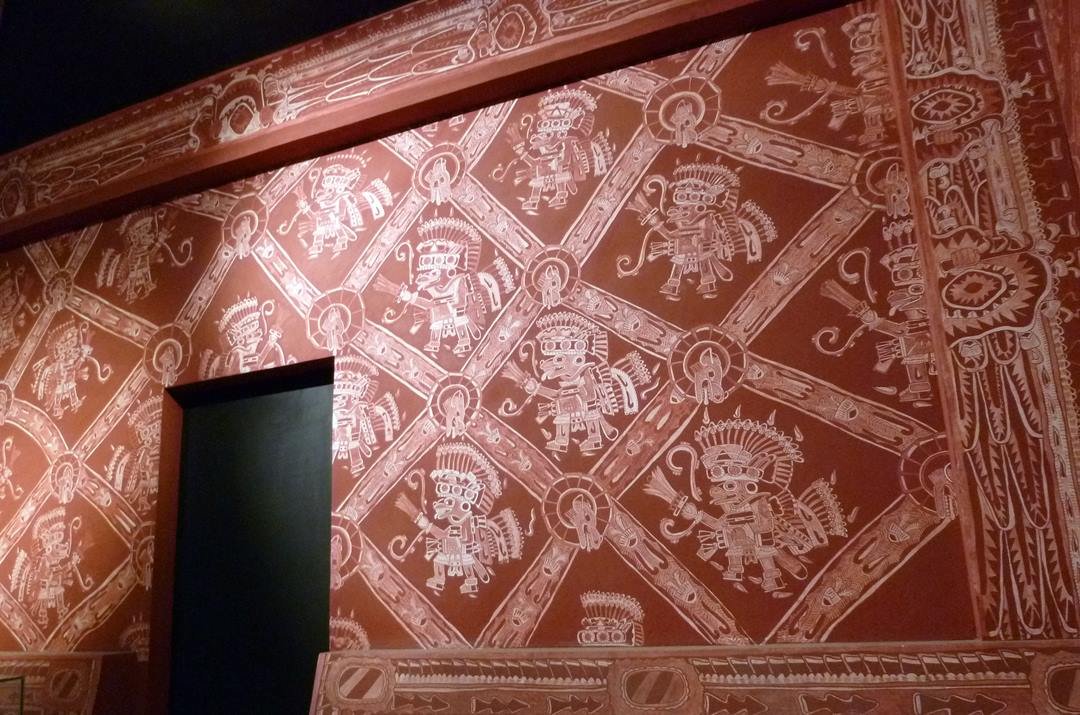 7 Northwest of Gate 1 in Teotihuacan’s main area is a group of palaces. There were 120 walls with murals discovered in the Palacio de Tetitla that depict jaguars, eagles and serpents. In the Palacio de Atetelco there are also murals of jaguars and coyote that are vivid. The murals were discovered in the 1940’s and the majority are well preserved. It is an interesting and enjoyable guided tour to take.
The Palace of Quetzalpapalotl 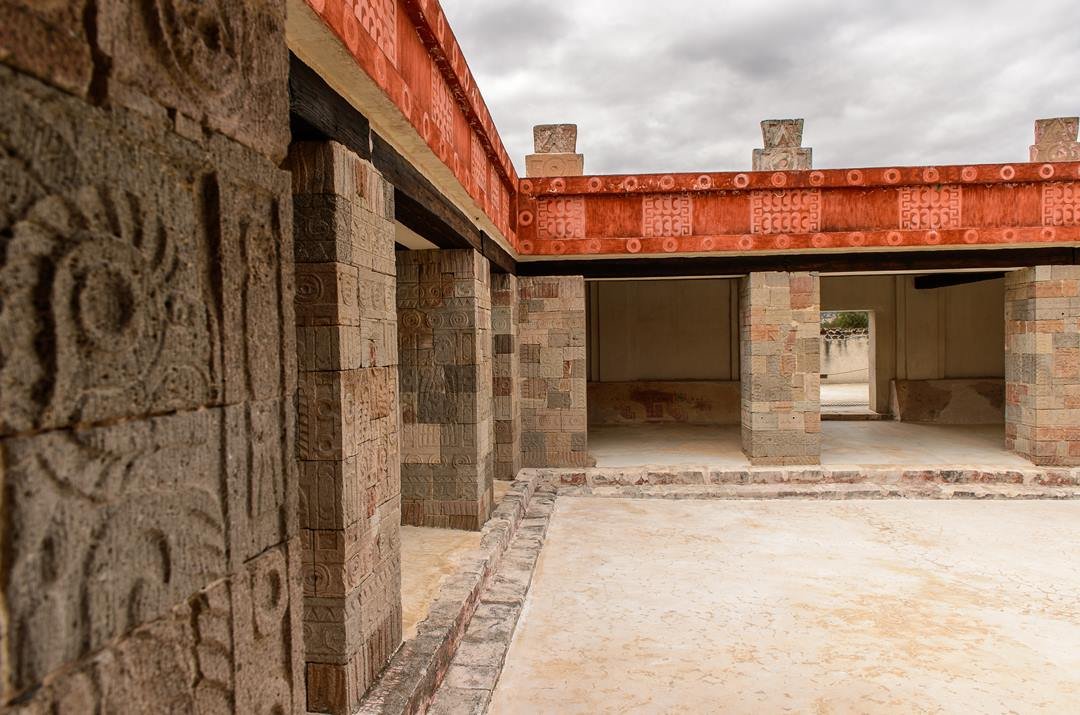 8 The Palace of Quetzalpapalotl is an elegant palace that was said to have been built around 250AD. This stepped building was beautiful with cut stone relief carvings, a painted roof ornaments that had geometric designs. In the inner courtyard are stone pillars with images of birds that are thought to be the mythical creature Quetzalpapalotl which was both bird and butterfly. Again there are lots of interesting things to learn.

The best time to visit Teotihuacan is when the weather is not too hot or humid especially if you are planning to climb the Pyramid of the Sun. The months from March to May are good times for sightseeing tours. The best time to visit during the day is early in the morning when there are fewer crowds. The climate is fresher and cooler at this time which helps when walking and climbing.

The varied prices of guided tours will depend on the length of tour and a number of places you see on the tour. It also depends on the time of the day. There are vendors selling crafts which are more expensive than in the cities and the chances are you will find the same there. It is worth your while to have water and food with you because the vendors will charge a lot more because they have the monopoly here.

The most important tip for visiting Teotihuacan is to bring water because you do not want to get dehydrated nor do you want to pay extra for water bought there. Wear a hat and apply sunscreen regularly during the day. Due to the complex being so big, it is essential that you wear comfortable shoes for walking or climbing, also because the ground is very uneven. Try not to stray from the tour groups