The city of Mysore was renamed officially in 2014 to Mysuru. It is best known for having the best palaces in the state of Karnataka, India and the name ‘Palace City’ is a popular choice with many tour operators and visitors.

To go on a private tour to Mysore is certainly no eyesore.

A sightseeing tour of all the Palaces would take more than one day but the most fabulous architecture and flamboyance, has to be seen and each one different from the next.

The history alone is fascinating but the fact that these buildings were built thousands of years ago is extraordinary.

With the quantity of great places to see in this city; a guided tour will not disappoint you.

Mysore also earned the title ‘Cultural capital of Karnataka’ due to the growth of its cultural achievements.

There are four museums in the city divided up into different categories; Railway Museum, Folklore Museum, Sand Museum and Regional Museum of Natural History all filled to capacity with interesting and educational items.

Top 10 Things to Do in Mysore

1   In relation to India’s royal buildings, Mysuru Palace is the grandest. The Palace you take a private tour of today is not the original, it was gutted in 1897 by fire; this one was finished in 1912. It has a very lavish interior with Rainbow Stained glass and mirrors, carved doors of wood and mosaic floors. There is a beautiful collection of art and sculptures to see as well as an exceptional armoury collection. Photos are only allowed to be taken outside the Palace.
Brindavan Gargen 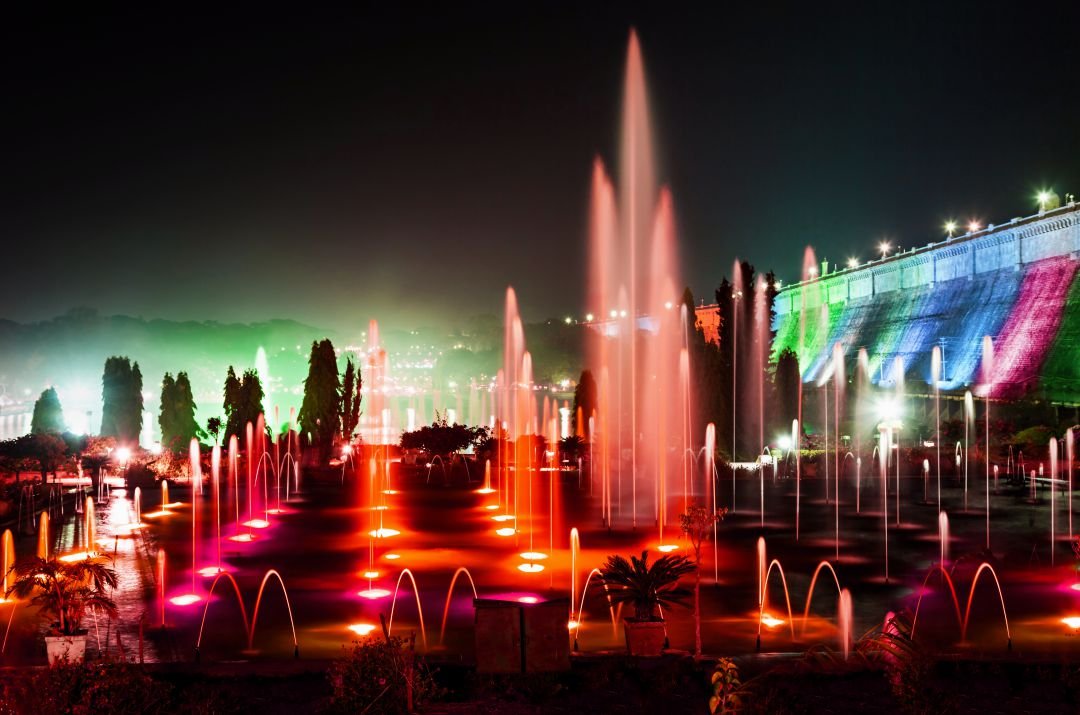 2 Take a guided tour of Brindavan Garden. It is located a little outside Mysore city and is home to beautiful gardens full of seasonal flowers, rare butterflies and you may see the odd crab occasionally scampering by. There is a fabulous musical fountain and in the evening time it is all lit up and the music is played. Take a short trip by boat on the lake or see the Topiary section with shrubs cut into the shape of animals. Then relax in the pagodas and gazebos!
Mysore Sand Sculpture Museum

3 While on a guided tour of Mysore you will see the most recent attraction in the city, the Sand Sculpture Museum which is the first one in India. There are the most amazing sculptures on display, about 150 of them with more being constantly added as each sculpture will only last for one year before disintegrating. The type of sculptures you will see; Lord Krishna on a horse-drawn chariot or things like Tom and Jerry or laughing Buddhas!
Keshava Temple

4 Keshava Temple is a Hindu temple that was built in around 1268 AD. The building itself is astonishing, it is in a star shape and has brilliant stone sculptures situated everywhere inside and outside the temple. All the sculptures are telling stories of the life and times of historical kings. The architecture of the temple is superb and you really do walk around on your guided tour in awe of all you are seeing and learning!
Chamundi Hill

5 Climb the Chamundi Hill and take advantage of the fantastic panoramic views on. At the top of the 1062 meter hill, there is the Sri Chamundeswari Temple that Hindu pilgrims come to by taking the foot trail which has 1000 and more steps. Tourists on private tours do not have to go through such torture as coaches and Rickshaws go up to the top. If you did climb the steps, you would see a 5m high Nandi statue (Shiva’s Bull) carved from the rock since 1659.
Devaraja Market

6 A visit to the Devaraja Market is a must when in Mysore and on guided tour you are kept safe and not taken advantage of by rogue dealers. The Bazaar is exciting, lively and you cannot help but feel uplifted and happy with the cheery local traders selling things such as flower garlands and spices. Everything sold in the Bazaar is traditional  and you can see how much the locals treasure their traditions. The smell, as you go through the Bazaar, is amazing.
Jaganmohan Palace

7 Once a stunning palace built in 1861, next to Mysore Palace on the west side, the building is now the home of Jayachamarajendra Art Gallery. There are three stories in this Palace and each one still shows examples of its ancient grandeur in architecture and design. On each floor, there is a huge collection of India’s Finest Art, traditional Japanese art, musical instruments that are extremely rare.
Jayalakshmi Vilas Mansion Museum Complex

8 This mansion was originally built for Princess Jayalakshmi Ammani who was the eldest daughter of the Maharaja Chamaraja Wodeyar. It is worth taking a private tour to this mansion that was renovated in 2006 and is now a museum that specialises in stone tablets and sculptures, folklore, ancient artefacts, rural costumes and it even has a ten headed puppet, made from wood, of The Demon King Ravana. This mansion is on a University campus.
Lakshmiramana Swamy Temple

9 Take a guided tour to this temple that is the oldest in the city. There are inscriptions found on the temple that date it back to 1499. The architecture is once again in India, absolutely incredible. In lay man's terms, the temple looks like it is a spire made out of square blocks instead of circles and is adorned with stunning carvings and sculptures. There is so much history associated with the temple, you need a guide to tell you it all, and each story is fascinating.
St. Philomena's Church

10 Original parts of land and building that is dated over 200 years old makes St Philomela’s church,  possibly, the oldest church in India. It went from a small church to a large church in 1933 as the Christian population crew with the more and more english soldiers settling down in Mysore. The architecture of the church is in Gothic style and the floor plan is in the shape of a cross. Behind the huge marble altar in the middle is a statue of St Philomena.

Mysore is not all palaces and cultural activities, it is also a very popular place for Yoga and has many worldwide known retreats. Mysore is the capital city for Ashtanga yoga, in all of India, and this alone attracts so many visitors to the city. You can come and learn to teach yoga from a revered guru or just relax on a yoga retreat, detoxing from stress and pressure.

Another tradition that is related to Mysore is its Bazaar district. You will be mesmerised walking around this area with the smells of the rice spices and incense or the fantastic colourful traditional silk turbans (Mysore Peta) and the Mysore Silk Saree.

The festivals that are held in Mysore attracts a large number of tourists, the biggest being the Dusssehra festival. It is extra special in the city with ceremonies, parties and lots of fun.

As a little extra piece of trivia, Mysore was the first city to have a private radio station!

The weather in Mysore is reasonably nice all year-round, so weather wise anytime is a good time to go. However from the months of October to February are the most popular as it is warm but not stifling during the day and cool at night. We would recommend going during the Dussehra Festival in October every year. The city lights up with processions and fireworks to celebrate ‘the victory of good over evil’

Mysore is great to go for a good valued holiday. The price of staying and eating in the city is very reasonable. As an example you can get a three-course meal for two people in a good restaurant for $10, a bottle of imported beer is $1.60. Hotels will vary in prices depending on ‘stars’, but even for a 5-star hotel, you are looking at less than $10 a night. The private tours are well priced too and worth every cent.

Mysore is a safe city to travel to however that does not mean you are careless when you are there. It is not recommended to go for a walk at nighttime alone if you are new to the area and in any way unsure of your bearings. When travelling around the city on Auto Rickshaws, make sure the driver puts on the meter, the majority of drivers are known for trying to overcharge tourists. Always be respectful when touring Temples, Sacred buildings and Palaces.

During the cold season which is from January to February when temperatures do not ‘normally’ go below 16 degrees Celsius during the day. The Hot season is March to May and the temperatures range from 19-35 degrees during the day. There are 2 monsoon seasons; South-West (June-September) which can bring heavy rainfalls for long periods and North-West (October - December) which has less rainfall and shorter showers.