Sights and Adventures Not to Be Missed, Take a Private Tour of Tunis

As an introduction to the country of Tunisia, a private tour of Tunis with its sights and adventure,s that should not be missed, is the best place.

Situated slightly inland from the Gulf of Tunis in the Mediterranean Sea, Tunis sits along Lake Tunis. This is a very laid back city of two sides. The new city with its very european influences comes from the French colonials during the 19th century. It is where you have the boulevards, cafes, patisseries and promenades, the perfect place to relax and people watch.

The Old city is where you find a centuries-old Medina that is the symbolic heart and historic part of Tunis. This is a labyrinth of narrow lanes and alleys full of keyhole shaped doors, artisan workshops and souvenir shops. The alleys will always lead you, eventually, to the Great Mosque.

The people of Tunis are very easy going and nothing seems to be a problem which in turn makes you relax around them.  Read More...

When you visit Tunis, a brilliant sightseeing tour to Tunisia’s top museum, the Bardo Museum, is highly recommended. This is a very opulent museum that is home to the world's best known mosaic collections.

Other interesting places to visit on guided tours include the ancient ruins of Carthage, the picturesque village of Sidi Bou Said or La Goulette.

The cuisine in Tunisia is delicious and everyone should taste the top traditional dishes which are served in most Tunisian Restaurants. Due to the European influences, there are many restaurants serving only european dishes.

The bars, entertainment venues and nightclubs will keep you occupied till the early hours of the next day, so enjoy!

Top 10 Things to Do in Tunis 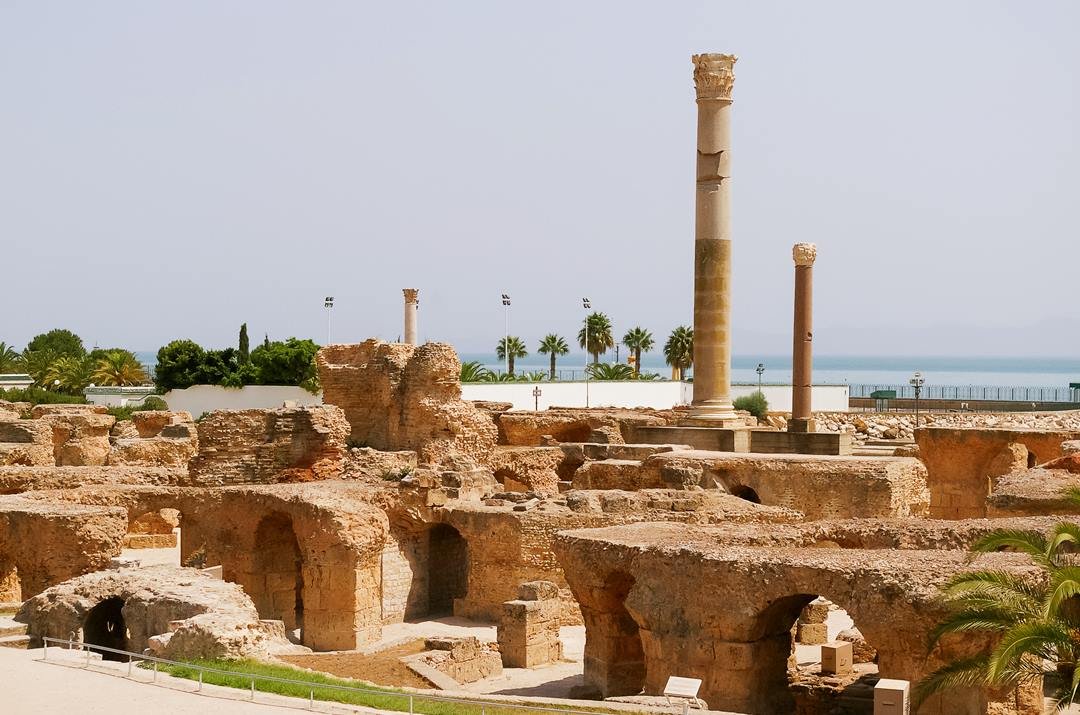 1 Take a sightseeing tour to the ancient ruins of Carthage that lie scattered along the Bay of Tunis. Carthage was once a wealthy seafaring city. There are not many ruins remaining except for tumbled columns and piles of marble rubble, but it is still well worth a visit. The panoramic views of the Mediterranean Sea alone are spectacular. As you walk around the ruins, there is a lost in time atmosphere.
Bardo National Museum

2 A guided tour of Bardo National Museum is a must when in Tunis due to it housing the most renowned mosaic collection in the world. Another reason to visit is because it is one of the top two museums in North Africa. There are exhibits of mosaic art in room after room that have been excavated from sites from all over Tunisia. For something non-mosaic, there are interesting exhibits of the Chrisitan, Islamic and net-punic eras.
Tunis Medina District

3 Medina is the name given to a city’s old town area and a guided tour of Tunis Medina is fascinating. It is regarded as the historic heart of Tunis with lots of things to see for a tourist. The winding narrow alleys, streets and lanes are full of crumbling buildings that have charm. Bab el Bahr is the gate that marks the start of old town and the end of the new city. It has been like this since 1848.
St. Vincent de Paul Cathedral

4 When in Tunis, go on a sightseeing tour of St. Vincent de Paul Cathedral which is the largest French colonial period building still surviving in Tunisia. Located in the ’Ville Nouvelle” - the New Town, it has neo-Romanesque frontage and was a huge reminder of the dominance of France over Tunisia during its construction in 1893. The tomb of the Unknown Soldier is located inside the Cathedral.
Olive Tree Mosque

5 Take a guided tour of the Olive Tree Mosque which you will find in the Medina. It is regarded as the district's great mosque and it is where you will see the finest example of religious architecture in Tunisia. You are allowed to roam the courtyard which is both tranquil and opulent. The rooftop is great for photo taking and see the dazzling tile work which is on display. Sadly non-Muslims can enter the prayer hall.
La Goulette

6 Sightseeing tours to La Goulette are more than just seeing the port suburb of Tunis. There are Ottoman and Spanish forts that can be explored. During the French colonial era and when the Lake of Tunis filled with so much silt ships were no longer able to come, La Goulette became a port. The top promenade is on the main coastal road and there are great places to go at night around this area.
The Park of Belvedere

7 When on a sightseeing tour of Tunis, stop off at The Park of Belvedere. This Park was created in 1892 and designed by Joseph OF LAFORCADE who was gardener in chief of Paris and an architect. It was and still is the largest park in Tunis. The are many animals that are allowed roam in freedom and it is very popular for many species of bird. The variation of vegetation and plantlike is diverse.
Dar Ben Abdullah Museum

8 Once one of the finest palaces in Medina, Dar Ben Abdullah is now a museum. On a guided tour, you get to have the opportunity to imagine how the rich lived in the 18th-19th century. It got a makeover in mid to late 19th century into fashionable Italianate style. Some of the rooms now are recreations of scenes from Bourgeois life in the 19th century which includes how weddings were prepared and how to drink tea.
New Town (Ville Nouvelle)

9 Tunis is a city of two towns, Medina the old town and Ville Nouvelle the new town. On a sightseeing tour of the new town there are lots of stunning architecture with a mix of post-colonial and colonial styles. The main avenue of this area is Avenue Habib Bourguiba and it is wide with eucalyptus and palm trees that all add to make this avenue somewhere special.  There is a clock monument that symbolizes the modern era of Tunisia.
A Stroll through the Souks

10 Everyone must experience a stroll through the Souks in Tunis. Souk is the Tunisian name given to markets or bazaars.There is a fantastic atmosphere when you are walking here and the venders at their stalls can be very entertaining. They are always happy and will say anything if they think it will help them sell their produce. Type of things sold are jewelry, clothes, wedding dresses, carpets, fabric, spices, leather and so on.

The ideal time to visit Tunis in Tunisia is during the months of April, May, September and October due to the weather being neither too hot nor too cold and perfect for going on sightseeing tours. There are fewer tourists as it is outside the school holiday range and slightly cheaper especially March and October. It is possible to visit during the other months but June to August is very hot and November to February is cool and wet.

For a capital city, Tunis is not expensive, quite the opposite, your spending money will go a long way here. It is possible to get a three-course meal in a mid-range restaurant for US$19 and that is for two people. A single meal in an inexpensive restaurant will cost around US$2. Accommodation prices vary depending on the grade of hotel or B&B you want. Local transport and taxis are cheap and check around for the best price for sightseeing tours.

Do your research about Tunisia and the city you intend to travel to. Many resorts are all inclusive but always get that confirmed in booking receipt. Should you wish to do sightseeing tours, it is advisable to pre book these in advance especially if you are going in peak season. When in Tunis during the hot months be sure to apply sunscreen regularly and drink lots of water. When on sightseeing tours to ruins it is a good idea to wear a hat/cap