Kairouan on a Private Tour for Mosques, Tombs and Candy-colored Doorways

A private tour of Kairouan will lead you to see Grand Mosques, ornate tombs and candy-colored doorways in the Medina.

Situated in Tunisia’s inland desert towards the north, Kairouan is an important religious pilgrimage site and it is referred to as being the fourth holiest city of Islam after Jerusalem, Medina and Mecca.

This city was founded in 670 and it has so many historical sites, landmarks, Great Mosques and architectural wonders that it is listed under the UNESCO World Heritage organization.

As this city is surrounded by land or desert, Kairouan is a place where you can spend a lot of time going on sightseeing tours due to the number of fascinating places, especially if you are interested in history, religion, architecture and archaeology.

There are beautiful hotel resorts where you can spend time relaxing by the pool, fantastic restaurants with delicious mouth-watering cuisine and enjoyable bars and cafes for somewhere to go in the evening time.  Read More...

Go on a Sightseeing Tour to North Africa's Oldest Islamic Building, the Great Mosque in Kairouan

For history and culture, there are not many cities’s in Tunisia better than Kairouan. You can learn so much on any guided tour here.

On a sightseeing tour of the Great Mosque, for instance, you are visiting the most important Islamic building found in North Africa which also happened to be the oldest.

Other interesting places to visit on a guided tour include the Barber’s Mosque, Aghlabid Basins and the Medina.

The Souks, which is the equivalent of a market or bazaar, is also a must when you are in the city of Kairouan

Top 10 Things to Do in Kairouan 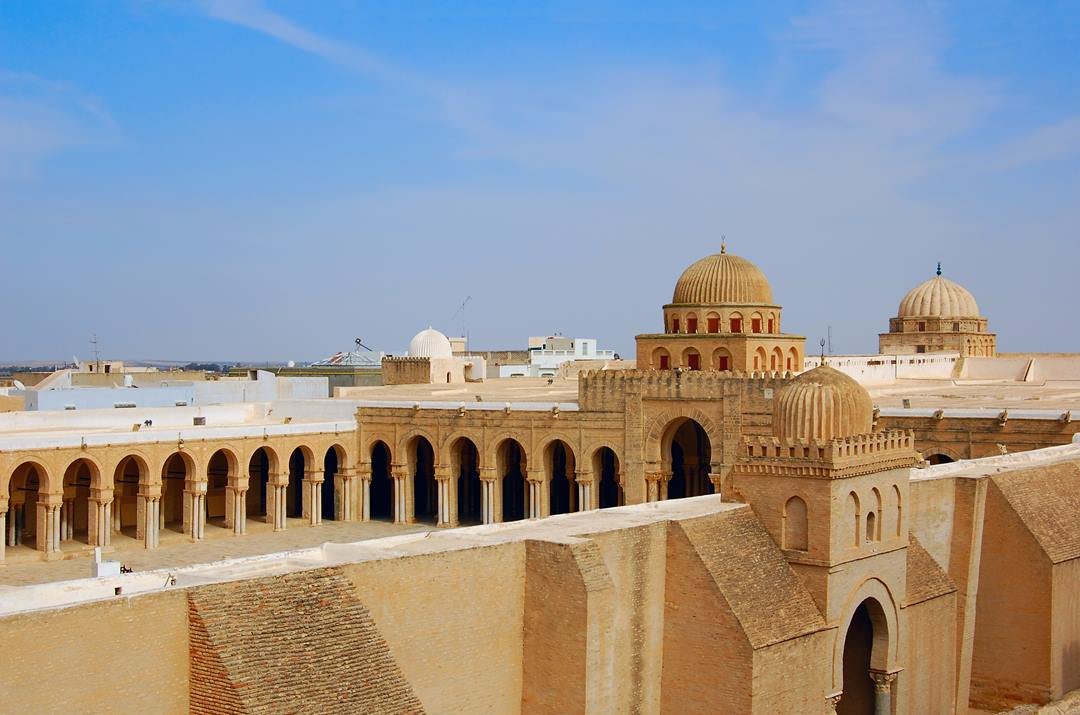 1 When you are in Kairouan, you must visit the oldest Islamic building and the most important in North Africa on a guided tour. Built in  AD672, this building and its architecture was the inspiration to many large Mosques in Tunisia. It is very large hence the word ‘Great’ in its title and has a courtyard. There is a lot to admire and although non muslims are not allowed in the Prayer room, the door is usually open for you to peek.
The Medina

2 Kairouan, like almost every city in Tunisia, has a fantastic Medina to see on a sightseeing tour. Medina’s in Tunisia is the name given to the Old Town section of the city. This one is very atmospheric and colorful as most of the doors on the narrow winding alleyways are painted in varied bright colors. It is surrounded by brick walls with numerous towers built in the early 18th century. The architecture everywhere is beautiful.
The Barber’s Mosque 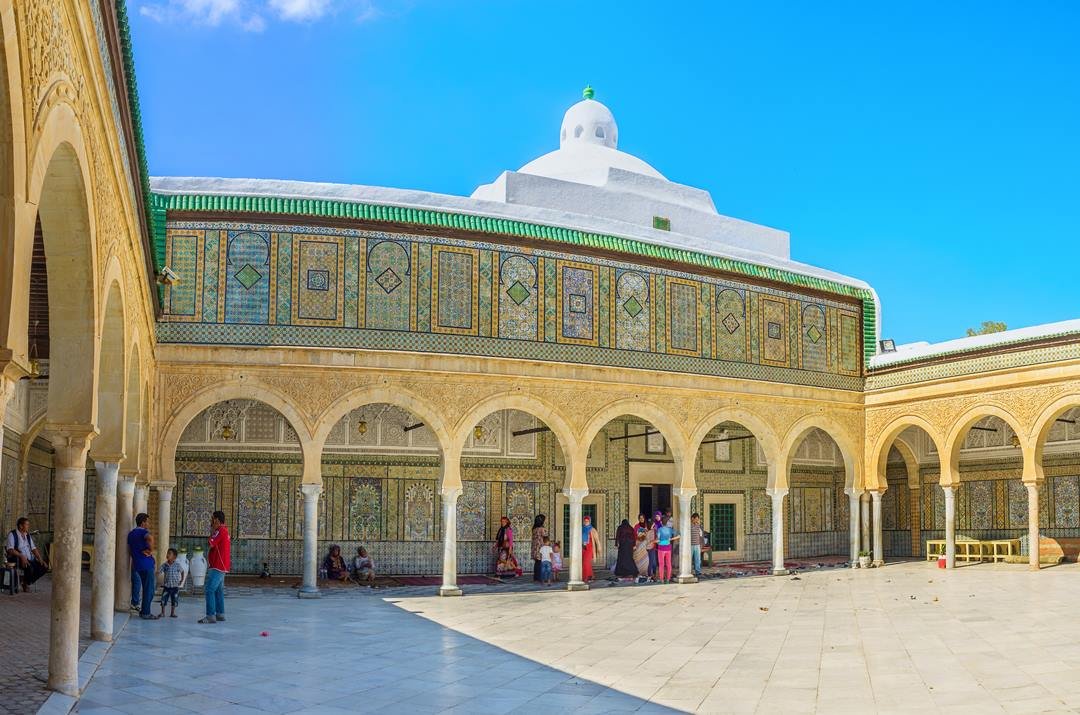 3 Located in the Medina, the Barber’s Mosque is another excellent place to take a guided tour. Within the complex is a mausoleum, a madrassa which is an Islamic school and a mosque. It was built, over the tomb of a companion of Muhammad who died in AD685, during 1629 and 1692. There are stunning forecourts, courtyards, fountains, a prayer room and spectacular tile decoration all to be admired on your visit.
Aghlabid Basins 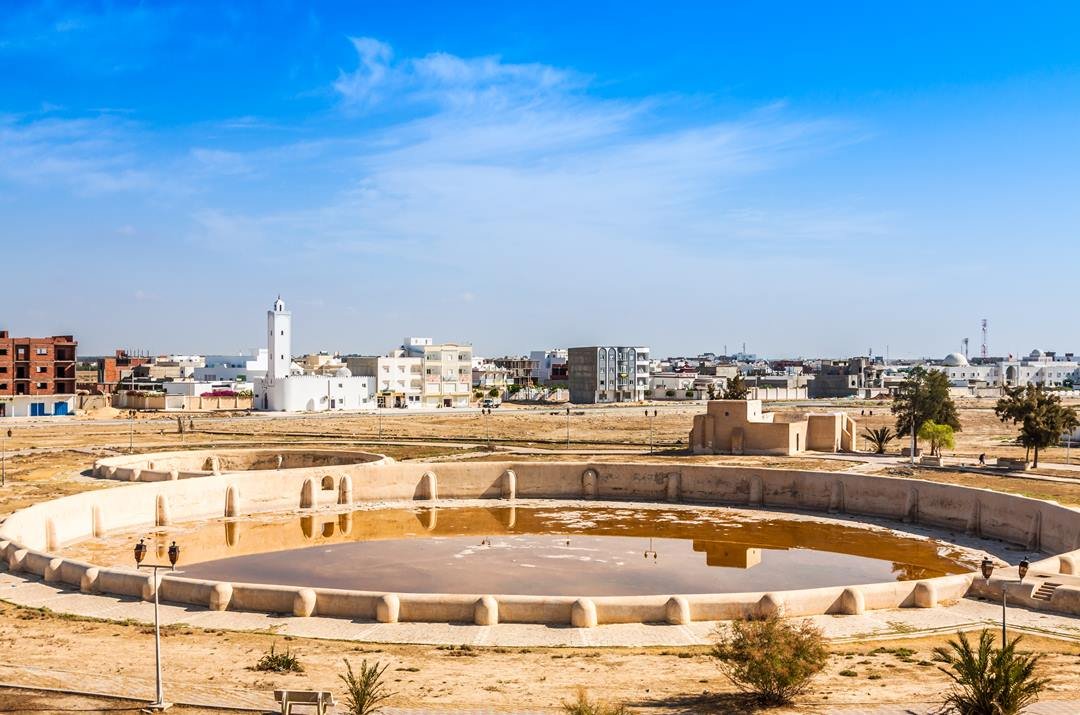 4 Take a sightseeing tour to the Aghlabid Basins which was an area that supplied water for the Aghlabid palace that is not there anymore. There is a small basin which was the settling tank and from there the water flowed into the larger basin. In the larger basin is the base of a pavilion where Aghlabid rulers would use to relax. In 1969 the basins were restored to their former glory and another pool was discovered.
Souks in Kairouan

5 You can find the Souks quarter in the Medina on a sightseeing tour. This is the shopping area and it feels more like a bazaar than a street of shops and workshops. The area was built in the 17th and 18th centuries and to this day it is where you will find Kairouan’s traditional craftsmen. The best thing is you can see the craftsmen at work. It is also the best place to buy little bits and pieces for souvenirs.
Islamic Museum Kairouan

6 A presidential palace that was built in 1970 is where yo will find the Museum of Islamic Art. The beautiful park and palace are interesting enough, but then you enter the interior and see some of the most amazing exhibits. There are reproductions of mosques, old prints and views of other towns, old Koranic inscriptions, coins from lots of dynasties and a variety of pottery. You need a guide for this tour as all exhibits are in Arabic.
Zaouia of Sidi Abed el Ghariani

7 The Zaouia of Sidi Abed el Ghariani is a very ornate tomb which is dedicated to a 14th-century holy man who lived in Kairouan. This is an excellent guided tour especially if you are interested in traditional Arabic artistry and decoration. There are stucco ceilings, fine wood, spectacular tile work that impressively decorates the walls and a splendidly decorated inner courtyard.
Mosque of Three Doors in Kairouan

8 When you are Kairouan, there are lots of mosques to visit and the Mosque of Three Doors is another interesting one. It is among the oldest buildings in the city and was founded by an Andalusian scholar in AD 866. The most obvious attraction of this mosque is the facade with three doorways, hence where the name came from! Look out for the two Friezes which are of Kufic inscriptions.

The best time to travel to Kairouan in Tunisia is April, May, October and November. The weather temperatures are in the mid 20’s, in Celsius, and this is a much better climate for going on sightseeing tours. Should you like the heat, then June, July, August and September are the best months because the temperatures average 30 degrees Celsius.

In general, Tunisia is a very cheap country to visit on holidays and when you visit Kairouan, you will be surprised at how far your spending money goes. Accommodation for one night in a good hotel starts from US$20 a room. A meal for two people which has three courses can cost as little as US$12. Sightseeing tours vary in price from peak to off season.

Do your research about Tunisia and the city you intend to travel to. When it comes to sightseeing tours, it is advisable to pre-book these in advance especially if you are going in peak season. During the hot months, in Kairouan, be sure to apply sunscreen regularly and drink lots of water and when you go on outdoor sightseeing tours, it is a good idea to wear a hat/cap.

Summer and hot season in Kairouan is June, July, August and September when temperatures average 30 degrees Celsius. The months that are the driest are February, March and May through to September. The wettest month of the year is usually October although there still may be the very odd shower. The coldest month is on average January when the temperatures are around 12 degrees Celsius.