The Copious Character of Kharkiv Is Obvious on Private Sightseeing Tours

Welcome to the second largest city in Ukraine, Kharkiv. A city for private sightseeing tours to witness the copious character found here.

It was once the capital of Ukraine until 1934 and with all the development, rich culture, history and industry, there are many who think, it could reclaim the status of capital again.

There is history in abundance in Kharkiv, all of which is fascinating. For instance, Kharko, an eponymous warrior, laid the city’s foundations in 1654.

During the Russian Empire times, this city was the first where Ukrainian SSR was declared in December 1917. This city was occupied twice by Germans during World War II and it witnessed a lot of bloodshed.

The Kharkiv you visit these days is peaceful, invigorating and welcoming. There is a lovely blend of hustle and bustle and then relaxation and nature. The options are wide open on what you want out of a trip here from quiet romantic times, educational guided tour times or adventure and wild nights!  Read More...

See the Violinist on the Roof on a Kharkiv City Tour

The wonders to be found in the city of Kharkiv on amazing city tours include seeing the monument to the Violinist on the roof, wander through  Europe’s third largest city square called Freedom Square which in itself has a history to be heard.

There is no possibility of going hungry in Kharkiv with the number of excellent new restaurants. The quality and taste are exceptional along with the atmosphere; you may find yourself staying in the restaurant for the evening. However, if you decide to move elsewhere, the only problem will be the decision on where to go. Ukraine's are known to 'like' their beer and therefore there are many bars and pubs to choose from.

Top 10 Things to Do in Kharkiv

1 When in Kharkiv, it is hard to miss Freedom Square when on sightseeing tours. This Square was once the largest in the world and now is the 6th largest. It is impressive and a true statement of the era it was built which was in 1925 during the start of Soviet times. It is large, over 11,000 square meters and for the 1920’s it was a significant achievement in architecture with DerzhProm its centrepiece.
Annunciation Cathedral

2 See the magnificent architecture of The Annunciation Cathedral on a private guided tour. It is a church with five domes that is of the Byzantine style. The facades are outlined by light plaster and red bricks and the bell tower looks like Gothic temples. The interior is also very beautiful with the main altar made of white marble. There is also a wall painting in the same style as the famous Hagia Sophia in Istanbul, Turkey.
Violinist on the Roof

3 The stunning sculpture of the Violinist on the Roof is a monument that you should see on any sightseeing tour of Kharkiv. The attention to detail on this sculpture is amazing you can still make it out from the streets below. It is a great landmark to use as a focal point to find where you are in the city. There was talk of it being removed from its original location but locals are guaranteed it will not be removed from the city.
Shevchenko Park

4 Whether you visit Shevchenko Park on a sightseeing tour or just to relax, you will love it. It is Kharkiv’s most popular green area that has beautiful alleys, a local zoo and botanical gardens to name a minor few of the attractions here. Visit the 50th parallel monument, of all the cities in the 50th parallel, Kharkiv is among the biggest. Stand on the Bronze Globe as it is strongly believed by locals that it brings you happiness.
Mirror Stream Fountain 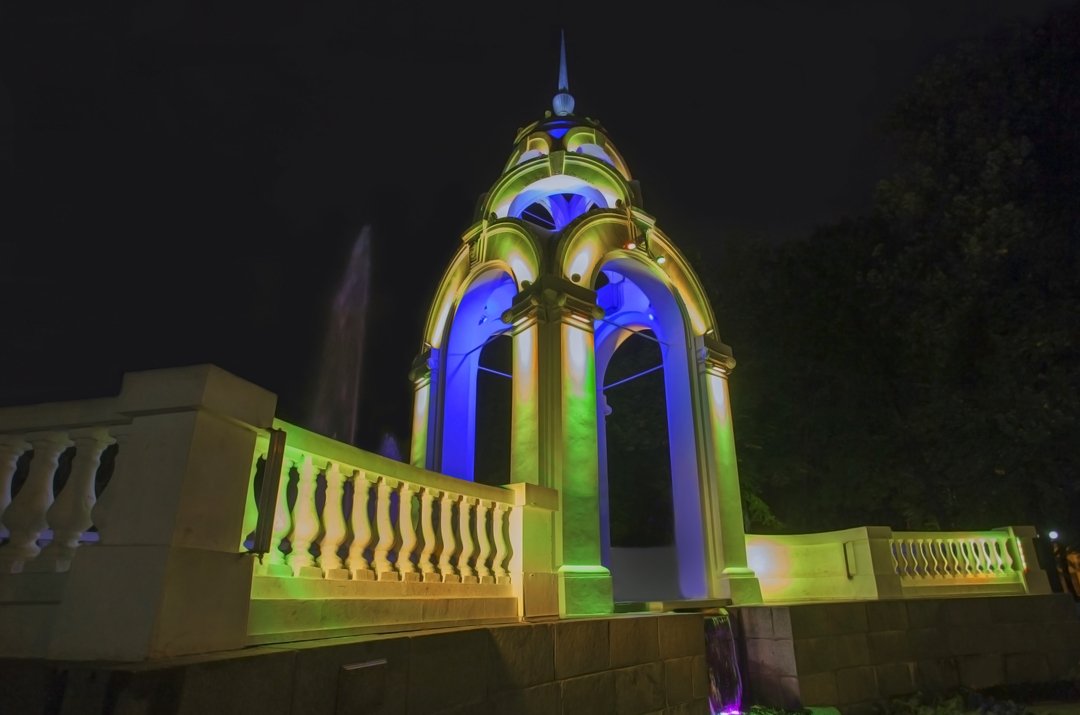 5 A very recognisable symbol of Kharkiv is Mirror Stream Fountain which will be included in any sightseeing tour you do in the city. It is nice to see this place during the day, but it is extra special after dark. The lights that illuminate the fountains along with the wide water stream makes this a spectacular sight to be seen. It is well known to be among the top romantic areas in the city.
Botanical Garden of Kharkiv National University

6 With a private tour guide knowledgeable in all things flora, visit the Botanical Garden of Kharkiv’s National University. Bright colours and tropical features will enhance your day. There are rare and wonderful flora that are native only to this area, but there are also plants from desert and sub tropic countries. The vast area is filled to its maximum and a perfect place to venture around.
Kharkiv Historical Museum

7 Enjoy an interesting guided tour of the Kharkiv Historical Museum which was established in 1920. Nowadays there are four sections with all things related to primitive times, society, feudalism, capitalism and soviet periods. There is a valued collection of items excavated from archaeological digs. See rare documents and pictures from all periods. Outside the museum, there are even tank canons!
Pokrovsky Cathedral 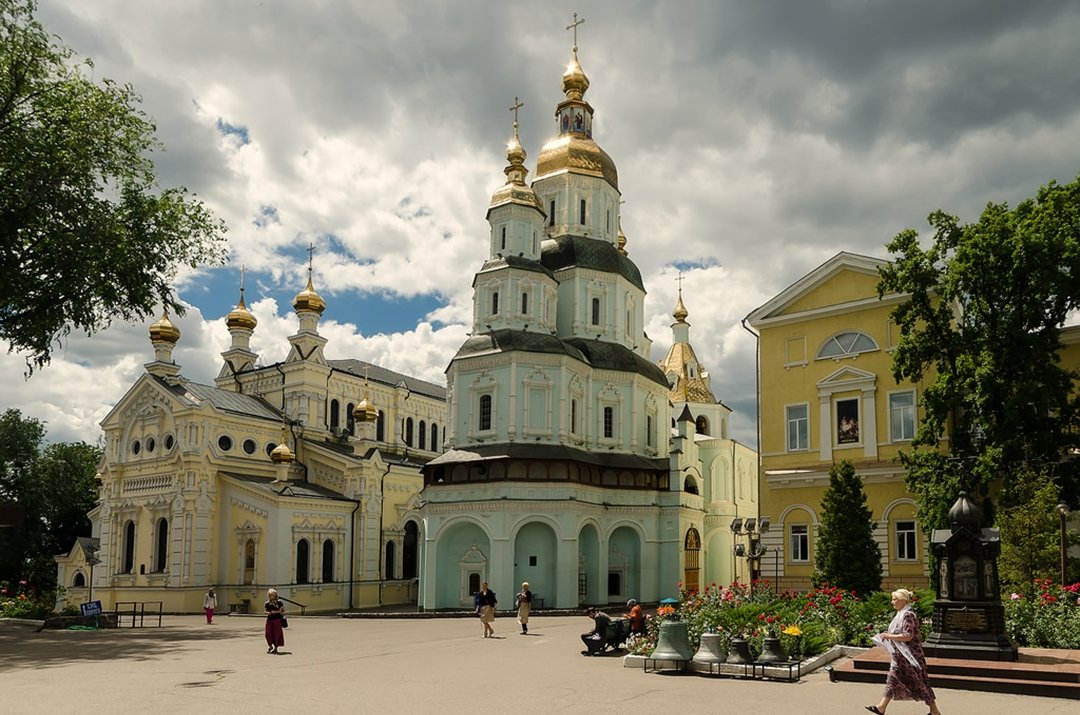 8 Another beautiful sight to see in the city of Kharkiv is the Pokrovsky Cathedral. It is the city’s oldest male cathedral and the oldest architectural stone monument of national importance. The cathedral is of baroque style and has three domes. From the outside, it is spectacular to look at especially at night when it is lit up, but also the interior is as impressive to see on a specialised guided tour.
Kharkiv Art Museum

9 Among the oldest museums found in Kharkiv is the Kharkiv Art Museum. This museum has a collection of over 20,000 works of art including unique masterpieces of sculpture, paintings, graphics and crafts. The first collection in the Art museum was started by Vasiliy Karazin in 1805. There is a permanent exhibit of over 250 works of art from Ukrainian and Russian artists of the 19th and 20th century.
Kharvkiv’s Cable Railway

10 A great way to look out at the city of Kharkiv, well part of it, from a totally different perspective is by going on a sightseeing tour on Kharkiv’s Cable Railway. Since 1971 this cable railway has been transporting passengers passing the most picturesque views of Horky Park and of the Botanical Gardens. It is not the kind of trip that is suited to the fainthearted as the cable cabins hang from 8 to 26 meter in the air.

The best time to visit Kharkiv is said to be during the months of June to August but these are hot, busy and expensive months. The months of April, May September and October are less crowded, sightseeing tours are more comfortable as the weather is milder, it also happens to be much cheaper. Christmas and New Years are also a great time to visit with many festivals and open parties for all to enjoy.

The city of Kharkiv is excellent value especially if you compare the prices with other European holiday destinations. The prices will fluctuate from season to season, but on average a tourist gets get value for money. The cost of an evening meal for two people is around US$18, pub grub meal for 2 is around US$10. Accommodation starts from US$16 a night in a basic hotel. A taxi journey of 5 km is around US2.50.

Research the area of Kharkiv you intend to travel to and book as early in advance as possible, that way you should get cheaper rates. It is also recommended to book guided tours early too. Be always aware of your surroundings.And to get best rate of your money change your money at the bank instead off a change offices.

The climate of Kharkiv is described as cold and temperate. There is a significant amount of rainfall throughout the year. The driest month is March but still expect some rain showers so always have a raincoat on hand. July is the wettest month, but it is also the hottest month with average temperatures of 25 degrees Celsius. The coldest month is usually January with average temperatures of -7 degrees Celsius.