Without Delay Take a Private Tour to Mandalay in Myanmar

Fresh from many restrictions and a with a new democratic government Mandalay is a city of hope and dreams, without delay take a private Tour to Mandalay in Myanmar.

The second largest town in Myanmar, from first glance, can be seen as a busy, traffic jammed concrete building place, but once you look past all that, you find a beautiful location to explore. There are numerous monasteries and pagodas of stunning architecture, workshops to learn how they craft beautiful Buddhas and other grand statues and teahouses to sit and relax in.

The people of Mandalay and Myanmar are most welcoming, friendly and happy people. They love to meet new people from all over the world and learn from them especially because of the restrictions that were in place before there were not as many tourists.

Take a sightseeing tour to the rural parts of Mandalay and find the active traditional people, both men and women covered in traditional make-up known locally as thanakha and men wearing longyi which are like skirts. Their mode of transport is a horse and cart.

If you are looking for a tour with breathtaking views look no further! I highly recommend this cultural Bagan Private Tour

This tour covers 3 ancient cities near Mandalay and enjoys rural area near Mandalay by local boat and horse cart at Ava. This tour is highly recommended by many travelers.

Start from Mandalay and it was over in Yangon. Your guide will meet you at Mandalay airport, visit around Mandalay, Bagan, Yangon and transfer to Yangon airport for departure.

Top 10 Things to Do in Mandalay

1 While all other temples and pagodas in Mandalay are covered in gold, this fabulous monastery is of carved teak and is stunning to look at and admire. It is built upon tree trunk poles and the interior is majestic with more dark teak everywhere. A guided tour of this monastery is extremely enjoyable and the history keeps you enthralled. The gardens surrounding the monastery is pristine and it all looks so picturesque.
Atumashi Kyaungdawgyi 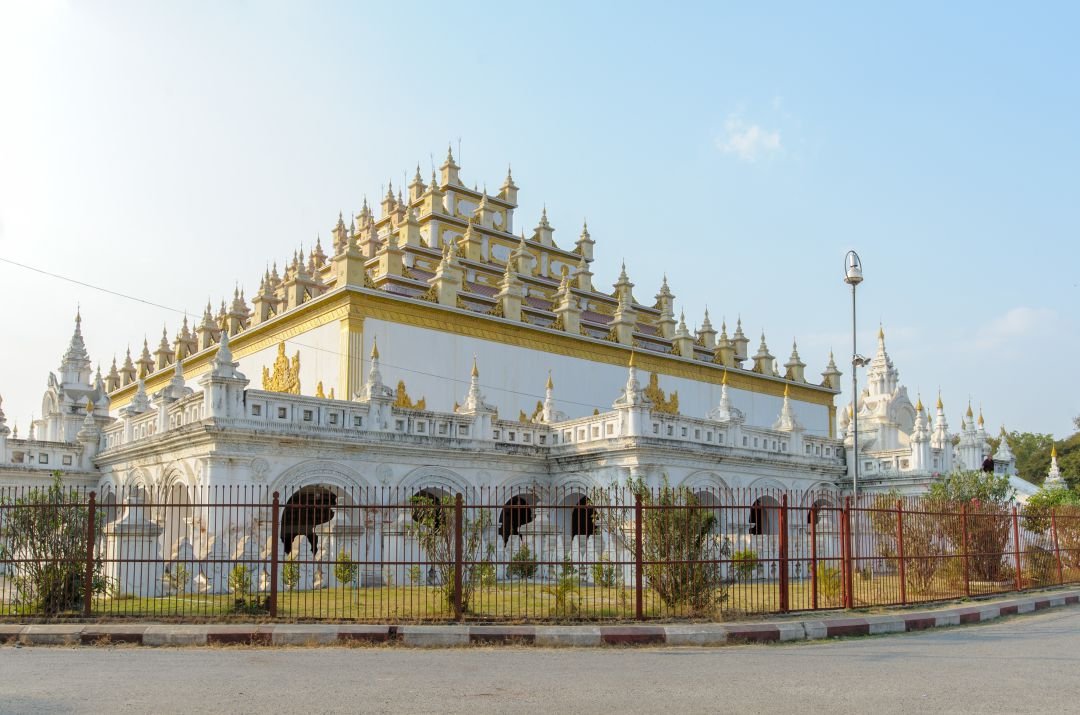 2 A very unusually shaped Monastery that is found in Mandalay. It is actually made up of a few different stupas (temples) in one area, all with terraces and peacock motifs. Each building has its own use with the largest one being the prayer chamber. It once had a Buddha with a huge diamond set in it, but it was stolen after the British takeover in 1885. What is there today is a reconstruction as fire in 1890 destroyed it.
Mandalay Palace

3 A must see destination on an escorted tour in Mandalay is the Mandalay Palace. Originally built in the 1850s it was completely reconstructed in the 1990’s and has more than 40 timber buildings. You have an opportunity to climb a spiral watchtower made of timber and you get the most fantastic view of the whole Palace and gardens. The most impressive thing that strikes you immediately is the multilayered tilted gold pyramid above the main throne room.
Jade Market

4 For something completely different to do in Mandalay, visit Jade Market. This fun trip is where you get to see jade traders trying to sell their ware and haggling till someone finally gives in. Or watch the craftsmen and women cutting and polishing jade. You may not go with the intention of even liking Jade, but after the traders finish with you, you think you have bought the most precious gem ever, it is hilarious.
Yankin Hill

5 A hill with a Temple on top does not do justice to describe Yankin Hill. It is the place to go on a private tour, for great views of Mandalay and while on the way there, feed some domesticated stags to bring you Buddhist merit. There is a covered stairway up to the hills, but a car or motorbike can get near the hilltop on one side. The Pagoda walkways are along the ridges where there are goldfish statues that the devoted splash water on for good luck.
Ta Moke Shwe Gu Gyi

6 This is a massive complex and one of the finest sites in Myanmar for archaeology. A private tour is a must to Ta Moke Shwe Gu Gyi as there is no on-site English guide or even English signage. It is a fascinating site none the less with the ‘encased’ Buddha that has three Buddha statues built into each other, resembles the Russian dolls concept and the remains of a two-story temple with depictions of animal,
Mya Kyauk Kyaung

7 The Mya Kyauk Kyaung is a modern monastery with a notable brass stupa. The Mya Kyauk area is well known for its subterranean source of alkaline mineral water which is supposed to promote IQ, which helps such things as diabetes, gout, constipation and morning sickness. To have some of this water, you have to first seek an audience with the head monk who will decide if you are worthy of drinking this water.
Mandalay Hill

8 The trek to the very top of Mandalay Hill is only 30 minutes if you walk directly there but as there is so much to see on the way it will take you a lot longer. There are parts of the climb that you have to be in your barefoot as you are walking through a sacred temple and you will be told when on a private tour. There are a few different routes to the top, but the most popular one is covered, so you are sheltered from the heat or rain depending on the time of year.
Mahamuni Paya 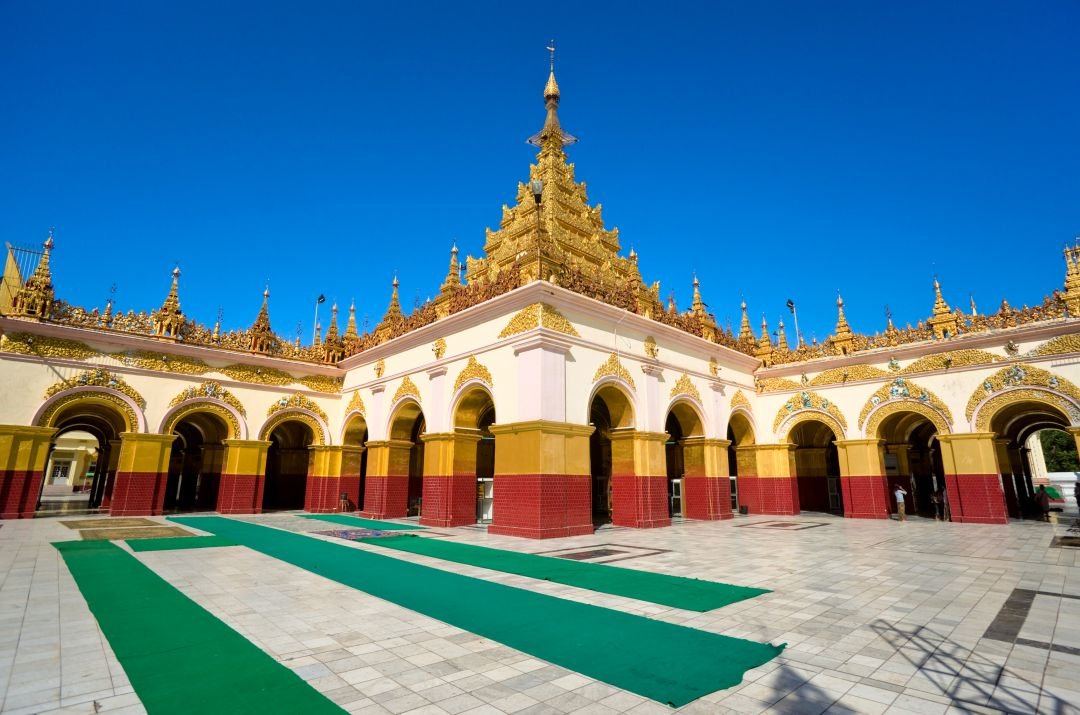 9 A beautiful Buddha temple situated in Mandalay to be viewed and admired. Thousands of faithful's dressed in colourful attire, attend every day to the Mahamuni Buddha. There is a 6-inch layer of pure gold all over the sacred Buddha except for his face that is polished around 4 pm every day. Inside the temple, the story of how the Buddha statue got to this temple is told through paintings in the courtyard gallery.
Pinya Stupa Ruins

10 Pinya was once an ancient capital of Myanmar after the last Mongol attacks in 1303. Built by Governor King who was not well liked, he created great Bagan style buildings, but all that remains are large brick stop ruins. It is a novice archaeologist ideal place to go and visit on guided tour, which still has images of Buddhas visible.

The range of things to see on sightseeing tours are vast. You are spoiled for choice of temples and pagodas to see, as it is nearly impossible to see them all. The saying ‘if you see one you have seen them all’ does not apply to temples in Myanmar as each one has something different to offer.

There are museums, galleries and unique Tea houses all to be explored as well as markets with their delicious aroma of spices and traditional food wafting through the air. On a private tour to rural areas, the villagers welcome you into their village like long lost friends and happily will share their meals with anyone who visits.

A good time to visit Mandalay is from November to February which is actually the winter season. The weather is cooler at that time than the rest of the year with temperatures averaging 30 degrees Celsius during the day. The majority of the annual festivals in Mandalay are also during these months, so lots to enjoy and experience. You could travel in March, but it is starting to get very hot from then until May.

The prices of food and accommodation in Mandalay is excellent. The local currency is Kyat and 1000 kyat is about 74 cents. You can have a delicious meal for less than $4. Accommodation price varies depending on what and where you want, but a good clean and a comfortable 3-star hotel can be as little as $15 a night. Taxi or motorcycle taxis are not expensive at all and start from $1 for a shortstop. Try and pre-book your guides as it will work out cheaper.

You will need a travel visa to enter Myanmar and these are issued from the Myanmar embassy in your country, it can take minimum 5 days. Thankfully there is not much crime in Mandalay, but it is always wise to be careful of your property. You will need to be on the alert for snakes as there are some poisonous ones so avoid all. Be careful when eating out, always eat from where you can see the food being cooked Tours are better booked in advance.

Mandalay’s tropical climate has three seasons, from November to February is the winter season and this is when it is cool and dry. Summer season starts in March to May and it is very hot then, to such an extent it can be unbearable. Finally, the monsoon season is from June to October and it is humid with heavy rain, but the sun does come out most days for a little visit for various lengths of time.