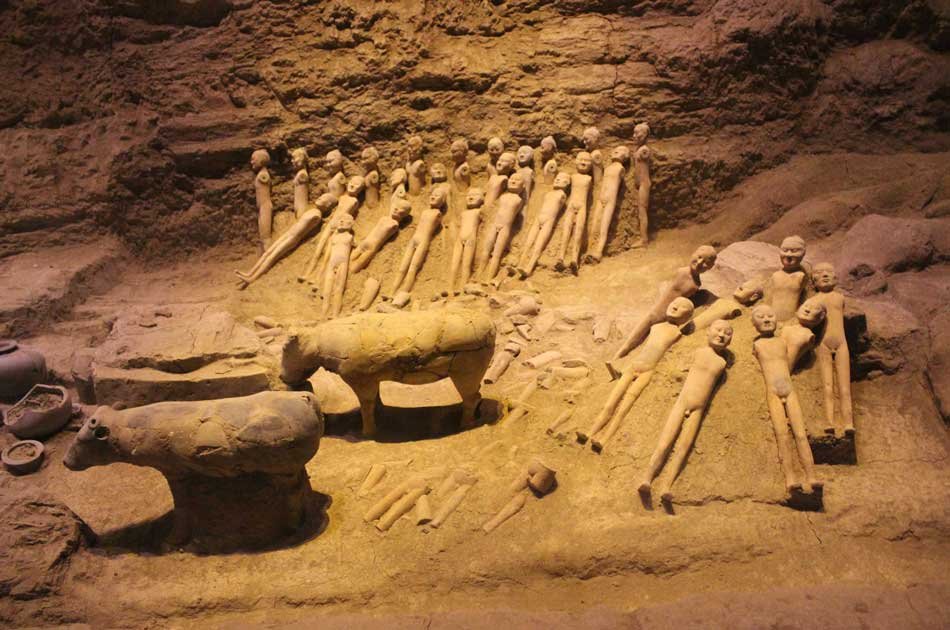 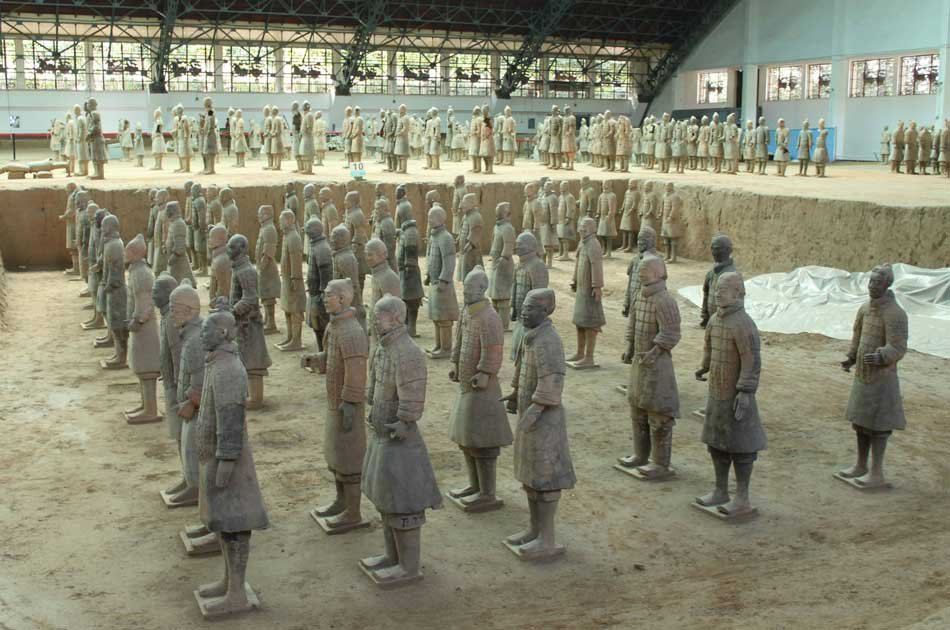 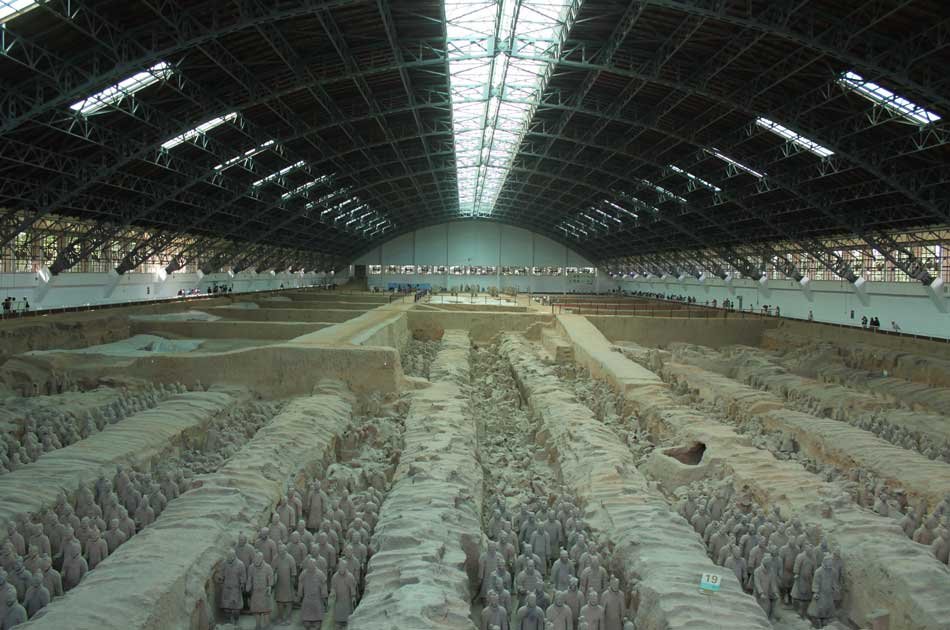 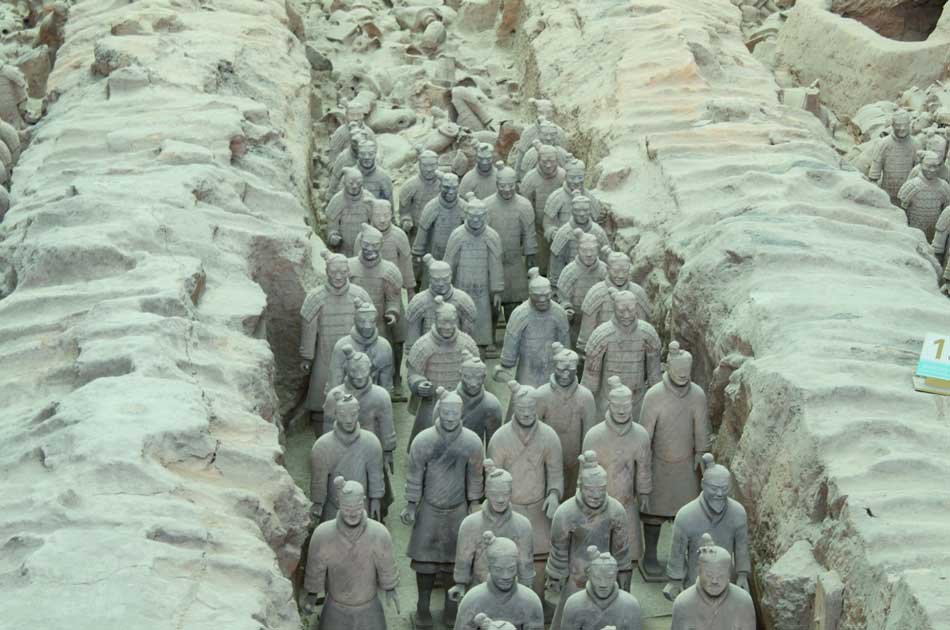 After pickup from your downtown hotel at 9:00 am, a knowledgeable guide will accompany you to explore the magnificent legacy of Qin and Han dynasties.

You will firstly visit the heritage of Qin Dynasty, the world-famous Terracotta Warriors and Horses Museum. It is a sight not to be missed by any visitors to China. Follow your guide to learn the history of China’s first Emperor and visit all three pits of the Terracotta Army Museum, where you will see the 2,200-year-old sculptures depicting thousands of unique figures and be shocked by the vivid life-size terracotta figures of warriors and horses.

After lunch in a local, traditional restaurant continue to discover Han Dynasty and learn how Qin Dynasty was overthrown by Han Emperor.

Visit Yangling Mausoleum of Han Dynasty - a joint tomb of a notable emperor of the Western Han Dynasty (206 BC-24AD) and his empress. It is a magnificent and abundant cultural relic, comprising the emperor's tomb, empress' tomb, the south and north burial pits, ceremonial site, human sacrifice graveyard and criminals' cemetery.

Later the guide will transfer you back to downtown hotel to conclude the trip.

US   July 04, 2018
Rating
The diversity of this tour was just unreal. An amazing trip, I would come again!
Reviewed by J Baker

US   June 26, 2018
Rating
Great trip. Our guide was a fantastic guide. The warriors are a must if you are in this part of China. At the Han Yangling Mausoleum you can walk around and between the excavated pits which are glassed off and see the relics from over 2000 years ago which is quite amazing. I felt that this was worthwhile as lunch was also included and would definitely recommend it.
Reviewed by T J Parker

US   May 20, 2018
Rating
We didn't have to worry about anything on this private tour and that made our trip that much better. Definitely highly recommended.
Reviewed by Sophie Forbes

GB   May 19, 2018
Rating
We highly recommend taking this private tour. The warriors were amazing and the Han Yangling Mausoleum was a real hidden gem.
Reviewed by IndigoBlue

US   April 22, 2018
Rating
We were very impressed by the size of the museums, and were very grateful to have a guide help us navigate all the different rooms. Without a guide the whole tour would have been a bit lost on us
Reviewed by Tina Harkin

IE   April 21, 2018
Rating
We toured the Terra Cotta Warriors and the Han Yangling Mausoleum on this tour. Our guide spoke good English and we had a delicious lunch as well.
Reviewed by NEOLA T

CA   March 27, 2018
Rating
We enjoyed a most extraordinary day with our guide. Not only did we see the Terra-cotta Army and the Mausoleum, but we tried some tasty street food as well as having a great Chinese lunch. Would definitely use this company again.
Reviewed by Ellen T

AE   March 26, 2018
Rating
Xi'an was our first stop in China and we had an excellent time largely due to our terrific guide.After we did this tour we booked another one to show us around the city the following day. Well done and thank you for being so professional.