Easter Island may very well be the most remote inhabited Island in the world, but it is definitely among the most famous archaeological sites in the world. With private Easter Island tours, you get the opportunity to feast your eyes on the extraordinary discoveries.

Easter Island is one of the amazing Chilean Islands located in the Southeastern Pacific Ocean. This is also the Polynesian Triangle’s most southeastern point in Oceania. An Easter Island sightseeing tour is not a day trip as it is a 5-hour flight from Chile but where else in the world are you going to see the mysterious stone moai and go on the unique adventure tours Easter Island has to offer?

This Island has wonderful Polynesian ‘Rapa Nui’ folklore, fascinating iconic legends, landscape like nowhere else, rich in remote natural beauty and breathtaking sunsets. You can never have the same magical and magnetic experiences you have here anywhere else in the world!

Easter Island received its current name from the first European visitor to the Island, Jacob Roggeveen a Sea Captain from the Netherlands. He arrived on the Island Easter Sunday 1722.  Read More...

The Moai or Easter Island statues as most people call them are the most famous attractions to see on the Island. They are spread over the entire Island and a recommended guided tour Easter Island is to Ahu Tongariki. With the blue sea as its frame, this is a spectacular sight of a platform with 15 giant sculptures in the row.

Easter Island has lots of different landscape and natural wonders to explore such as extinct volcanoes, caves and beaches. The best way to get the most out of exploring these places is to go with Easter Island adventure tours where you can horseback ride, kayak, hike, bike, dive and so much more.

Culture tours Easter Island are also a must when you are here. It is always great to learn new and fascinating facts about this Island and visiting the Culture Centres and museums will help you achieve this.

Top 10 Things to Do in Easter Island

1 The ceremonial platform, Ahu Tongariki is a wonderful and magical sight to see on private Easter Island Tours. This is 15 huge sculptures on an extended platform that is 220 meters long and is Polynesia’s largest structure of its kind. Where Ahu Tongariki is situated, as you look straight upon the sculptures, they look like they are in a picture frame with the frame being the blue waters of the Ocean. It is a mesmerising sight!
Rano Raraku 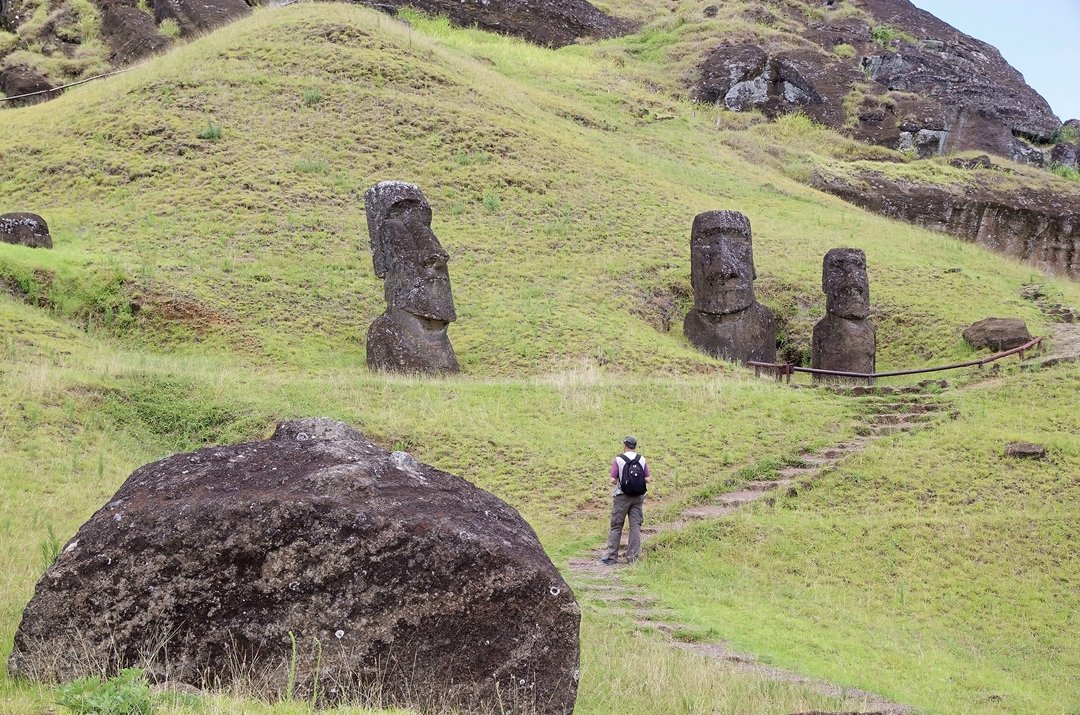 2 Rano Raraku is an extinct volcano of significant importance on Easter Island. On guided tours Easter Island, you learn from your tour guide about ‘the quarry’ as it is known due to this being the place where the moai where made/carved and then sent all over the island. It is a truly impressive archaeological site with 397 moai visible which are at varied stages of development. It takes time to see all there is to see!
Orongo 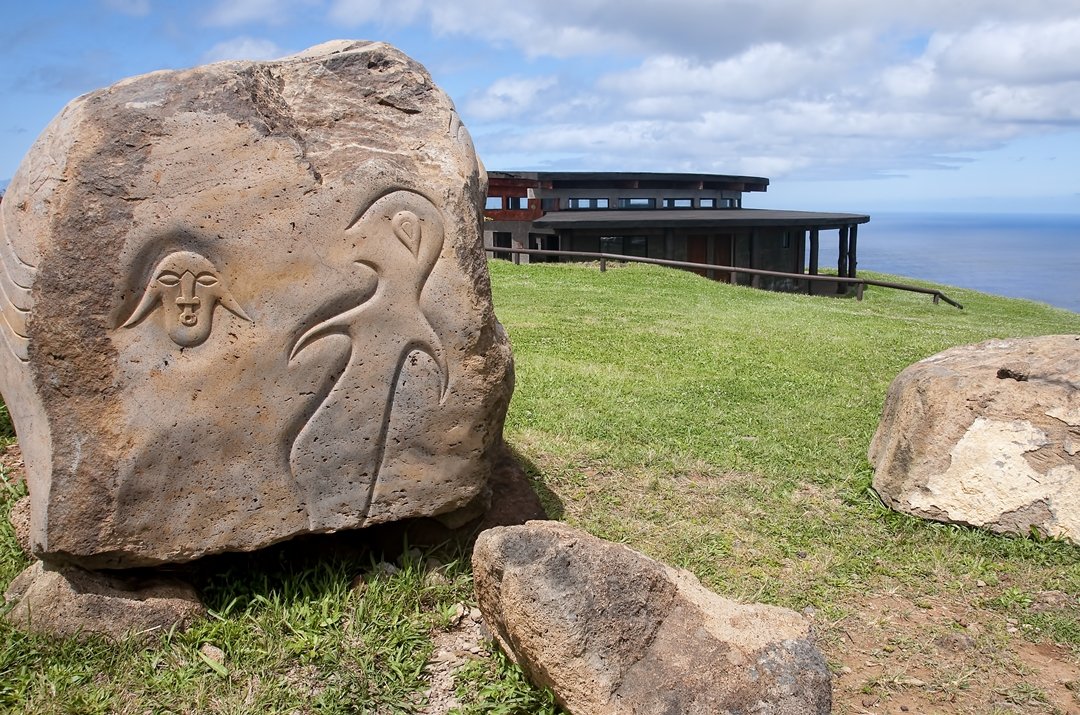 3 Orongo is called a ceremonial village however at no stage was there ever any inhabitants mainly due to its location between Rano Kau craters edge and a cliff with a 300m drop into the Pacific Ocean. It was a ceremonial centre where initiation ceremonies such as a child's entry into adulthood took place. The views of the breathtaking landscape and ocean make a memorable Easter Island sightseeing tour.
Aha Tahai 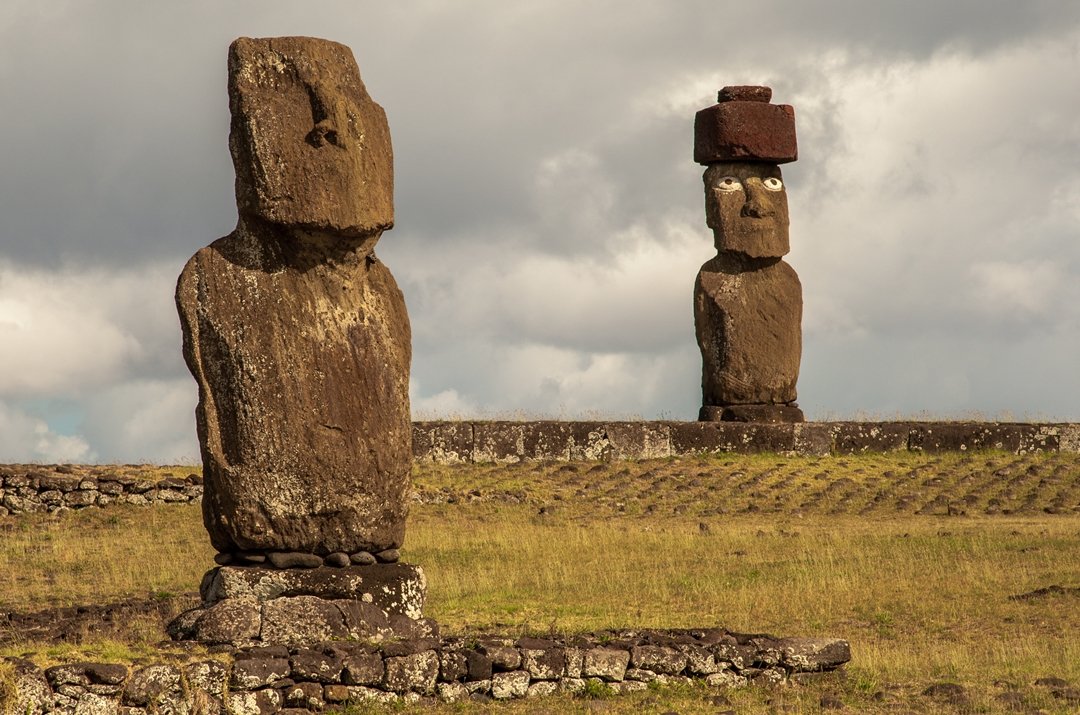 4 Guided tours Easter Island include a fantastic sunset tour of Ahu Tahai. A perfect image and photo opportunity occurs as the sun sets behind the Ahu Tahai five moai. This is an archaeological site that William Mulloy, an American archaeologist, and his team restored during the years of 1968-1970 also recreating the Papanui villages in its original layout. The ashes of Mulloys are resting under the hare paenga.
Sebastian Englert Museum 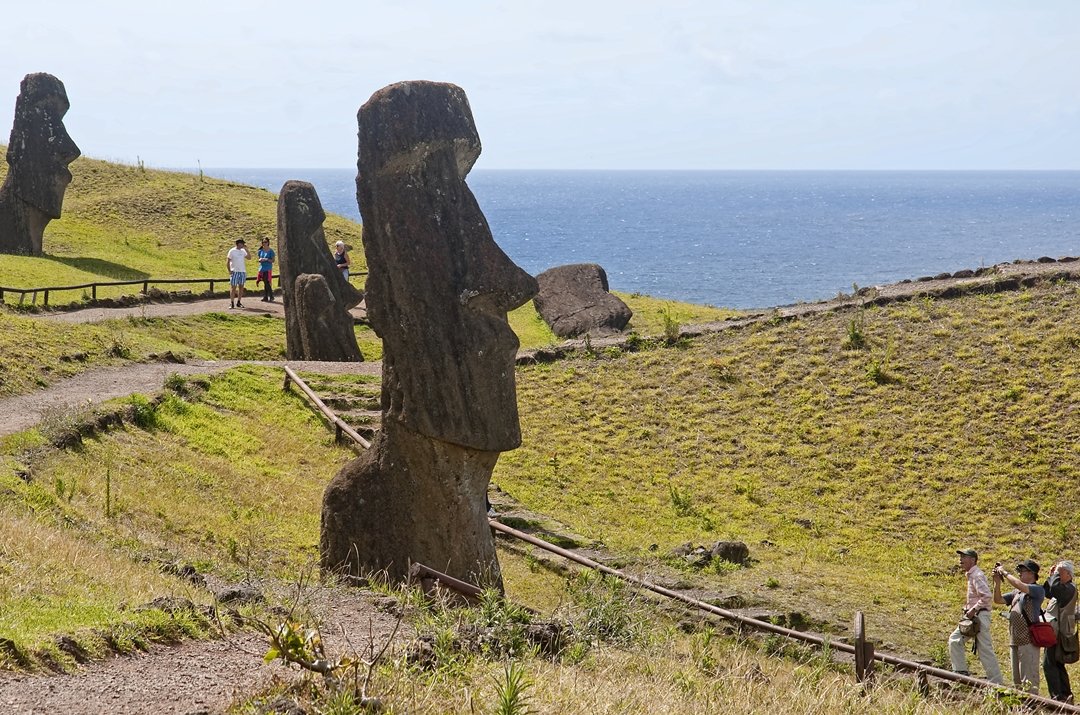 5 The Sebastian Englert Museum is Easter Islands Anthropological Museum and is named after a German priest who spent 34 years, from 1935, studying the language, archaeological heritage and traditions of the Rapa Nui. On culture tours Easter Island see the wonderful artefacts that Englert collected over the 34 years and bequeathed to the Chilean state upon his death in 1969. Many additional artefacts have been added over the years.
Ana Kakenga

6 Easter Island adventure tours have many options and Ana Kakenga Cave is one of them. Unless you are with a tour guide, you may miss the entrance to the cave because it is not signposted and is a tiny opening in the ground. Once you master the entrance, you make your way into the cave that looks as if it has two windows with spectacular views of the ocean. The sunset tours are the most breathtaking to do.
Tau Kiani Botanic Garden

7 A very enjoyable and pleasurable Easter Island sightseeing tour is that of the Tau Kiani Botanic Garden which is late in the Hanga Roa. The creation of this garden began in 2009 with Juan Carlos Poblete. It has beautiful and wonderful landscaped design with volcanic rock and wood from Easter Island giving it character along with moai statues. There are over 1,200 plants of many varieties to be seen, rope bridges and other delights!
Holy Cross Church 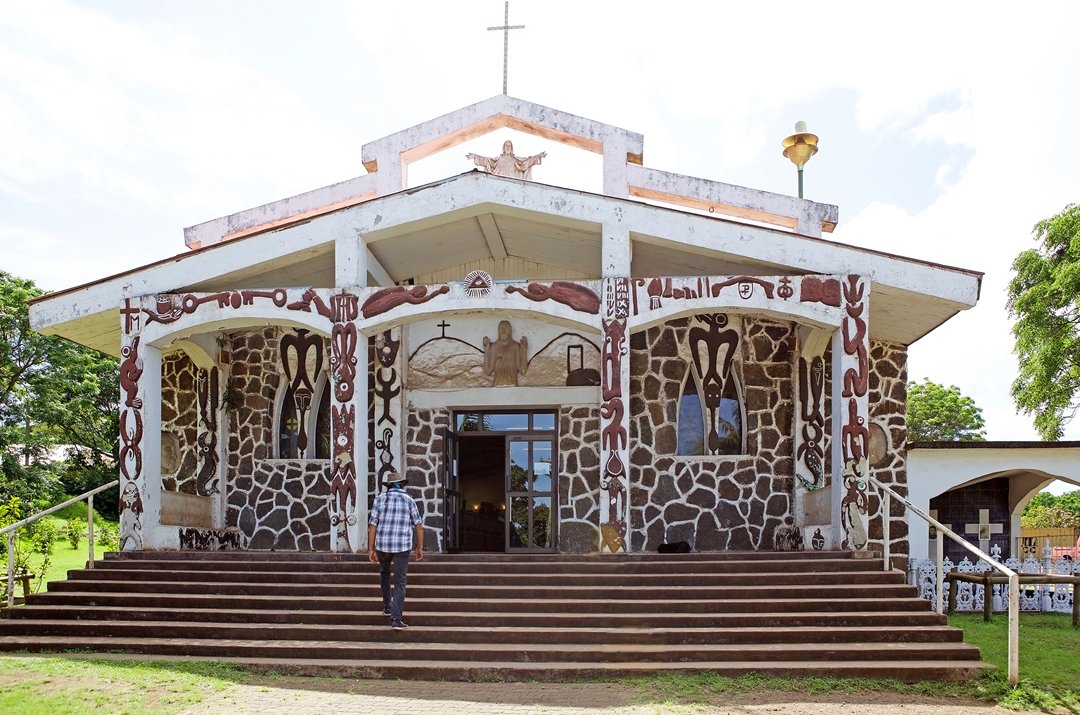 8 The Holy Cross Church is Easter Islands only Catholic church and can be found close to Te Henua street. Father Sebastien Englert had its first parish here once it was founded in December of 1937. There many spiritual rituals going on every day for tourists to observe when on Culture Tours Easter Island. With a tour guide learn all the fascinating history and stories regarding the church and see the interesting interior artefacts.
Ana Kai Tangata 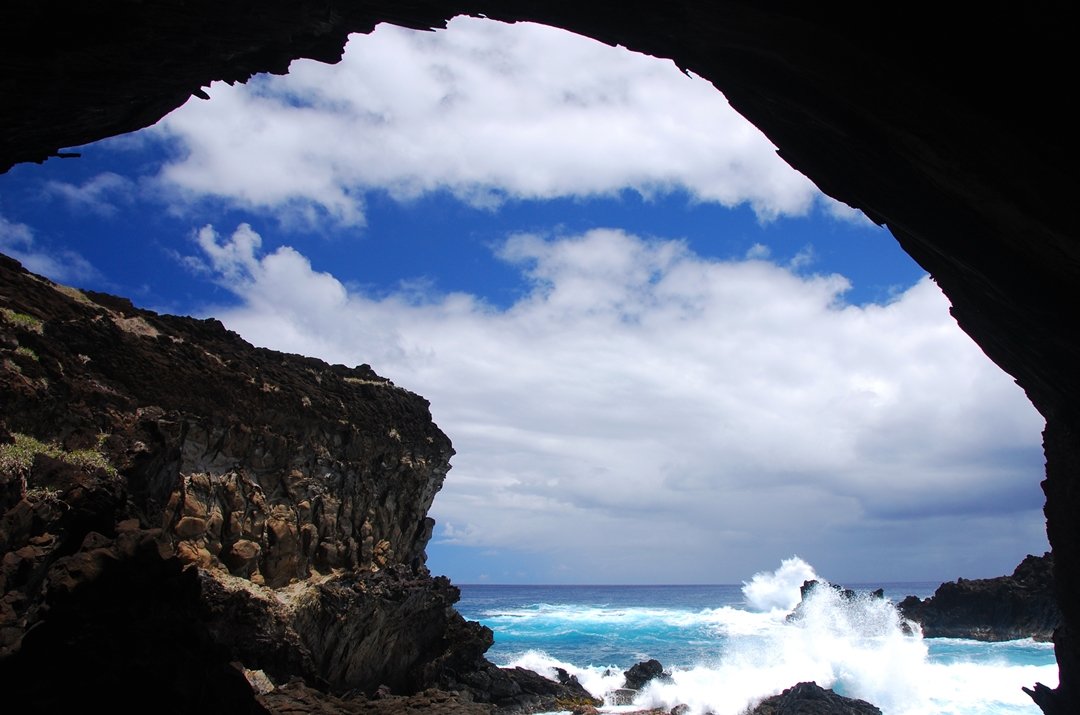 9 The most visited cave on Easter Island is Ana Kai Tangata. It has the reputation of being the most attractive and interesting of all the caves on the island. This is probably due to its location on the seafront. With Easter Island adventure tours descend the stairs which are carved on the cliff and straightaway, you see the magical ancient paintings on the ceiling and the sky and sea splitting the image in front of you
Rano Kau Volcanic Crater

10 The Easter Island adventure tours of Rano Kau is yet another must do. It is the most extraordinary and exceptional natural wonders on the island possibly due to it being the largest volcanic crater on the Island. It is over a kilometre in diameter and now frames a substantial freshwater lake which is the Rapa Nui people’s primary source of fresh water. Enjoy your adventure tour hiking, climbing, biking or horseback riding.

The best time to visit Easter Island, weatherwise, is during the summer months of December, January and February with temperatures of 27 degrees Celsius feeling cooler due to the Antarctic breezes. The rain falls more in May to July and October than any other month. For Easter |sland adventure tours the best months are March, April, October and November, it is cooler but better humidity to do the outdoor activities.

The costs when you get to Easter Island are very reasonable. The main expense is the journey to the Island as the flights can be very expensive especially during the summer months. When you are there, the average amount a tourist spends in a day is US$100. This includes one night's accommodation and all meals excluding snacks. If you can book any of the Easter Island sightseeing tours before arriving, it is cheaper.

Like most destinations all over the world, the earlier you can book your flight, accommodation and private Easter Island tours the better bargains you can receive. Eating out in restaurants is expensive as all foods are imported from Chile’s mainland so book all-inclusive hotels or complexes where possible. When going on Easter Island adventure tours, be sure to listen to the instructions from the professionals.

The subtropical climate of Easter Island means that during the summer it is warm and humid while in the winter, it is mild. Due to the Antarctic breezes, the actual temperatures can feel a lot cooler. During the summer, it is vital you are aware of this and apply sunscreen regularly even if you do not think it is very hot. The hottest month of the year is usually February with temperatures of around 26 degrees Celsius.