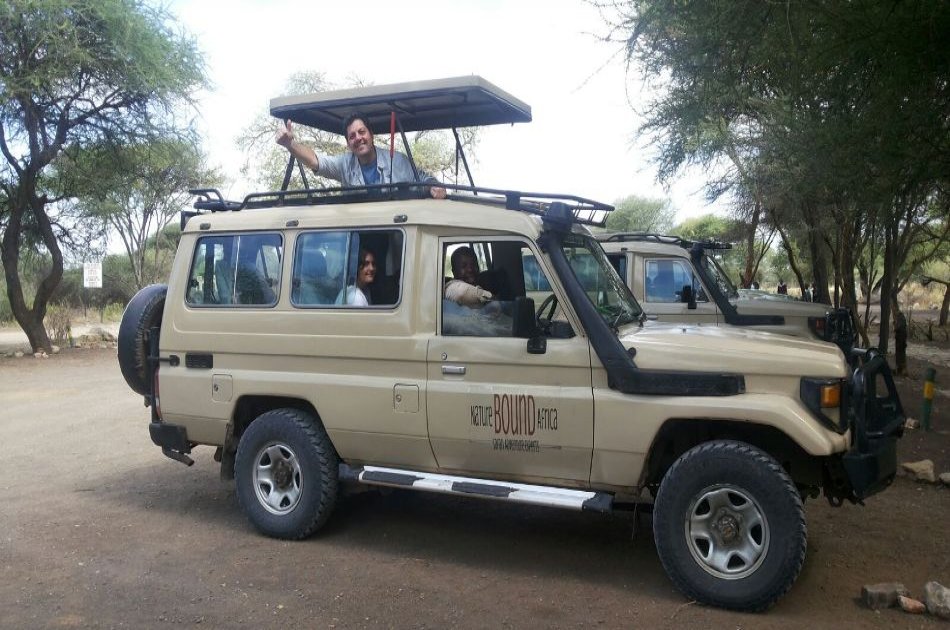 Tanzania has a lot to offer families travelling with children. This fantastic adventure, holiday destination give children an opportunity to learn about nature.interact with local children and experience a way of life completely different from their own.

It's a great way to bring the whole family closer together and offers activities that are specifically geared toward learning, as well as kid-friendly meals, and patient. Knowledgeable safari guide. Don't miss this opportunity to experience the real Africa with the whole family.

Arrival at the Kilimanjaro International Airport you are welcomed by our representative who will usher you into a waiting vehicle and transfer you to the Outpost Lodge in Arusha.

Our representative will have a short safari briefing session with you at the lodge and leave you to relax and have dinner.

Here you will visit community activities including local Maasai market,Snake park in the out skirt of Arusha ,Visit to the children's orphanage that we support and late in the evening return to your Hotel for rest ,Dinner and overnight at Outpost Lodge

After breakfast, you are met by our professional tour guide /Driver who will deliver a short safari briefing, after which we travel east to Arusha National park. This is small but beautiful Tanzanian national park is the closest national park to both the famous Arusha Safari town, as well as the Kilimanjaro International Airport, Thus making it ideal for 1-day safari or tour.

Not only is the animal park abundant but is also most significant feature include the rugged Mount Meru (Tanzania's second highest peak at 4566 m)the notably different colored Momela lakes and the 3 km wide Ngurdoto crater ,which was formed about fifteen million years ago. You will enjoy the Lunch at the Momela view picnic site and do an exciting morning game drive and afternoon game drive, visiting both the momela lake and Ngurdoto Crater.

Wildlife which could be seen includes African buffaloes,elephant,hippos,giraffe,warthog,antelope,zebra,blue monkeys and sometime a rare leopard or hyena. Late afternoon we depart back to Karama lodge for dinner and overnight.

Our Tanzania safari starts at 8:30 as we drive from Arusha to Lake Manyara with a picnic lunch en route .we inter the majestic Lake Manyara game Park and Embark on the first of Six Tanzanian Safari.

This small park is sandwiched between the rift valley escarpment and the large sodiforous Lake Manyara. It is plenty of location, with a good range of game, including giraffe, elephant, baboon and the rarely seen tree-climbing lion.

After your breakfast at the lodge, you will be at your way to lake Natron which is apparently the breeding site for the lesser and a greater flamingo who migrate here every year from as far as the lake Nakuru and Baringo in Kenya.

On your way to you will view Masai village and after an hour you will be at Engaruka village where you will have brief stop to visit the Engaruka ruins. These ruins of an ancient mysterious city with confiscated irrigation canals and remnants of buildings and graves.

There after you will be on your way again to lake Natron with view of more Maasai village and wildlife, arriving in time for for lunch at your lodge.

After lunch at the lodge and a short rest you will go for a walk at the lake and depending on water level you can take a dip or go for a boat ride.

You will have the chance to also walk up stream of the Ngasesero river up to the water falls. On your walk upstream you are likely to encounter monkeys and baboon along the way. In the afternoon you can go for a sun downer at the Lake Natron.

Today you activities will start with a walk at the lake again if you wish and therefore leaves for the Serengeti National Park.

You will cross the Loliondo Game controlled area where apparently the wildebeest heard across on and around November and December when they are coming from Masai Mara in Kenya.

After the registration formalities at the Klein's gate, you will go for a game drive in the vast plains of the Serengeti National Park (on you way to lodge ) where you will get chance to see lot of animals and bird life alike.

Among animals that can be seen here include the Zebras, buffaloes, baboons, topis, impalas, cheetahs, leopard, and recently introduced Rhinos, which were the only member of the big five that was missing in this park. Overnight at Ikoma Bush tented camp.

Safari in Tanzania is not completed without visit Serengeti National National Park.

At a day break you are out to the Serengeti plains for sunrise game drive that normally offers the only chance of sighting the nocturnal species retiring and also the diurnal species waking up to a new day before you go back for breakfast.

After breakfast you will leave for a full of game driver exploring the Serengeti depending on the season and the time of the year.

This is where you will witness the magnificent natural phenomenon of the "Great migration" where more than one and half million wildebeest accompanied by hundreds of thousands of gazelles ad zebras brave the crocodiles infested river and cross the border into the Masai Mara in Kenya in search for green pasture and water.

The resident animals and birds that stay all year around in Serengeti makes sure that the park is must visit whenever one travels at Tanzania. Later in the afternoon you will drive back to the campsite for dinner and overnight at Serengeti Ikoma Bush tented camp.

After breakfast we will start at 08:00 drive ti Ngorongoro crater, after checking in to your luxury camp perched high on the crater rim, and enjoying lunch, you will descend the crater walls and spend the afternoon and early evening viewing wildlife on the crater floor.

This day will start early in the morning at 7:00 for the game drive (with picnic lunch)inside the Ngorongoro crater.

As very few animals migrate in and out of the crater with its 2000 ft,High walls, you can expert to see lion, elephant, zebras, hippos, flamingos ,jackals, rhino, antelope, many birds and other species.

Your driver /guide will be in contact with the other safari drivers and will amaze you with his skills at locating the hidden animals .After great all exploration in a crater the driver will drive back to your lodge .For overnight and dinner at your lodge, Rhino lodge.

To days activities start by heading to the lake Eyas area for culture encounter of life time.

Eyas is the home of hunters -gatherer tribe known as the Hadzabe people with who have stood all the odds of westernization and still leave the ancient way of making a living through hunting animals and gathering fruits and tubers for food.

The Hadzabes are small ethnic group that has been able to co exist harmoniously with nature. You will have a chance to meet also the Dagota people a small tribe also with rich cultural heritage. This is a cultural day is wrapped up by a wonderful sundowner at the lake Eyas and if you are lucky to have visited after the long rains,you can take deep in the lake .

Overnight at Kisimangeda Tented Lodge . Learning Bush Life -Animals tracking techniques: Kids will become Maasai junior detectives as they listen to animal calls search for animals track ,and discover the hidden treasure of the Bush. -Survival techniques used in traditional Maasai culture: From constructing a shelter to building a fire from natural resources found in the bush, Children experience the legendary lifestyle of the Maasai people. -Plant used for medicinal purpose.

Kids learn about and their practical uses from the toothbrush tree to wet wipe tree and the disinfectant shrub to chewing gum tree. -Environmentally conscious practices:Kids discover environmentally friendly practices and learn how these habit affect nature and the circle of life.

Very early in the morning you will go for a traditional hunting session with bushmen and after breakfast you check out of the lodge.

You will then be on your way to Tarangire National Park which is the third largest national part in Tanzania.After registration formalities you will go for a full day of game drive in this fabulous national park highlighted with the gigantic baobab trees and abnormally large heards of elephant.

At Tarangire you will have a chance to sight the rare oryx and other animals like Zebras ,giraffes,warthogs,leopard,cheetah etc.

The Tarangire river which is the life blood of this national park ensure a year around supply of water and the river bed takes a center stage when animals gather to get this rare commodity resulting into magnificent wildlife action when the predators try to grab a meal taking advantage of the moment.

Later in the afternoon, you will drive back to Arusha for a flight to Zanzibar.

While in Zanzibar there is a lot of activities that are family friendly, in stone town full day spice and prison island tour will take you to the most scenic part of the old town.

This culturally rich town got its name from the use of the coral stone as the main construction ingredient. Being the oldest town in East Africa,The historical roots and influence can be felt at every turn of the tour. Starting from the house of wonders which is one of the prominent landmarks of stone town ,you can proceed ob the palace museum which a sultans resident.

The Arab fort, Dr Livingstone house, Fred Mercury's home and the pub and hamamni Persian baths are just a few of the many attraction in this relic of town. You will have free time in afternoon for your explore further on your own toe relax,In the evening depart from the Hotel for a sunset cruise along the stone town water front. Stop at forodhani gardens for a glance at the evening life.

Dinner and overnight at a stone town hotel. Accommodation while in Zanzibar will be at Mnarani Beach Cottages

You will be picked up from your hotel and head to the Airport for flight to Dar-Es-Salaam International Airport for your flight back home.