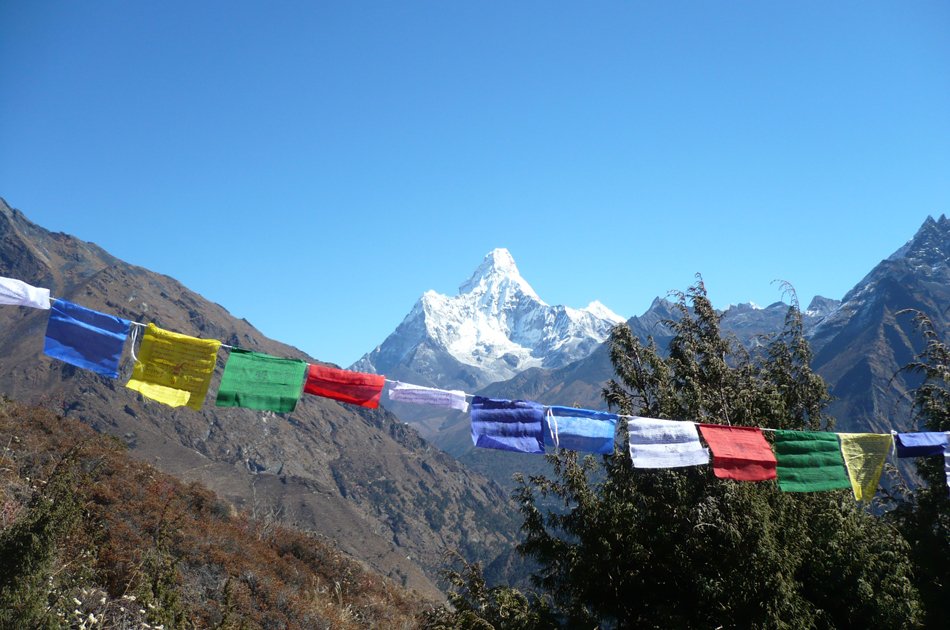 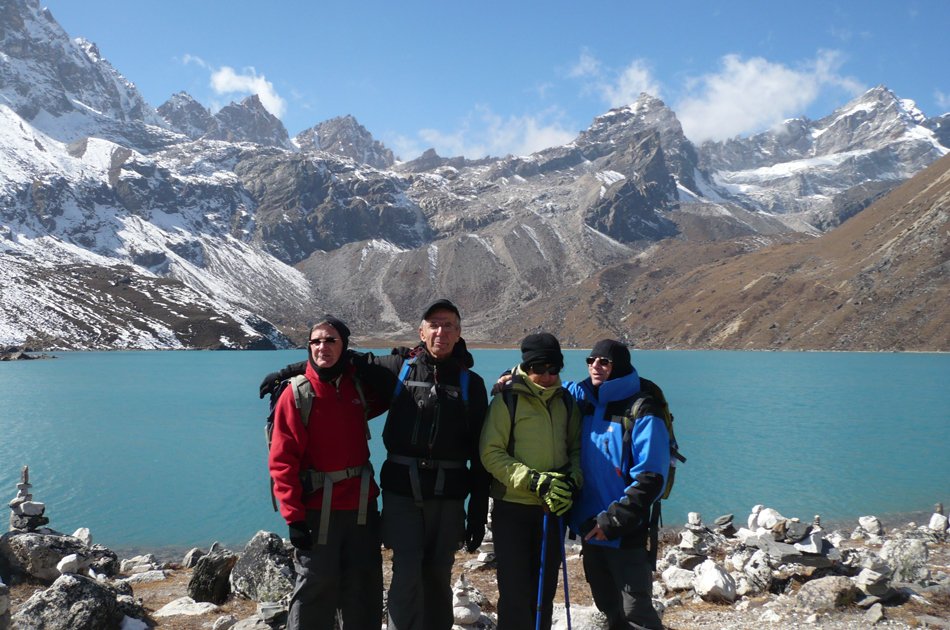 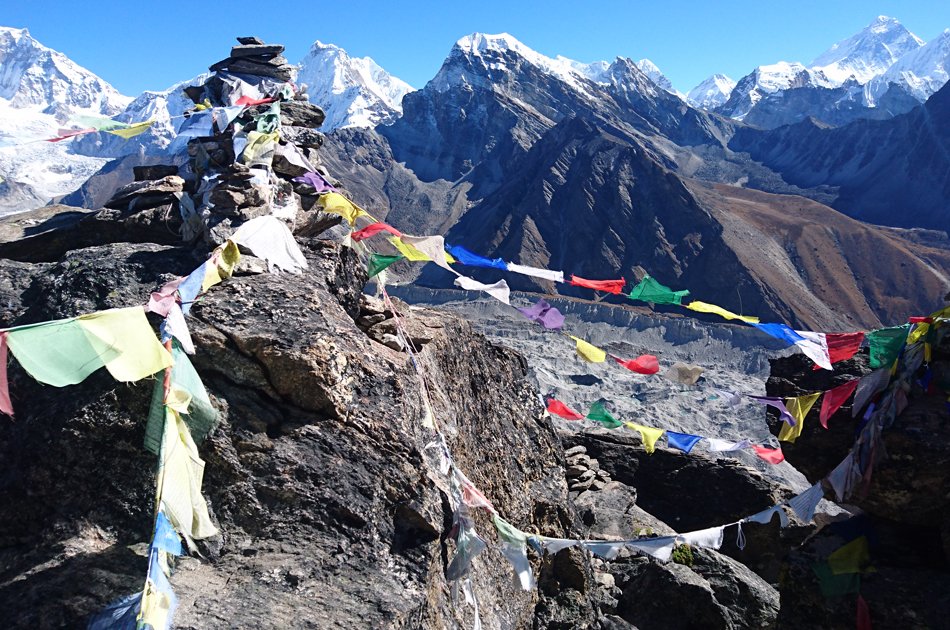 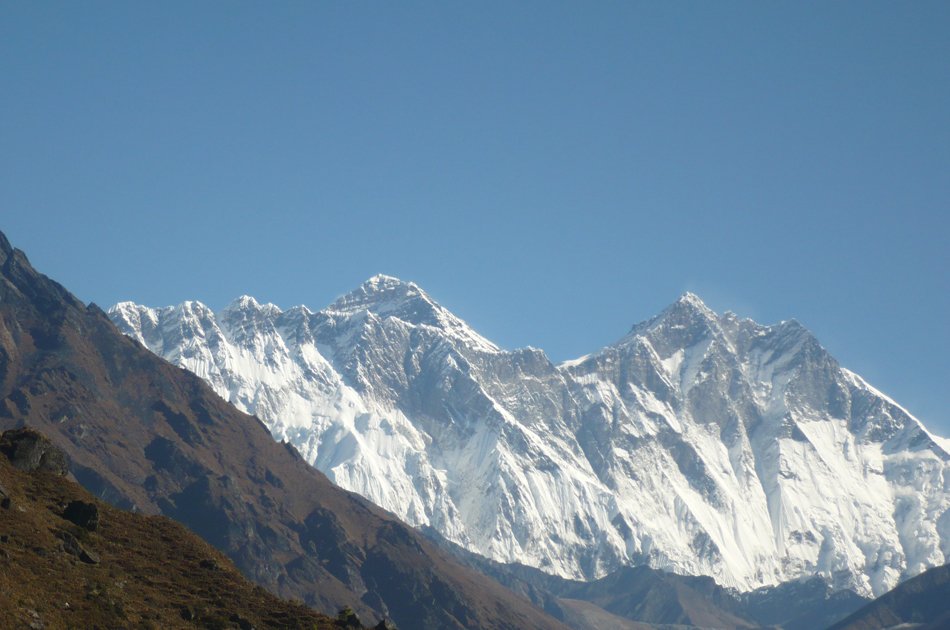 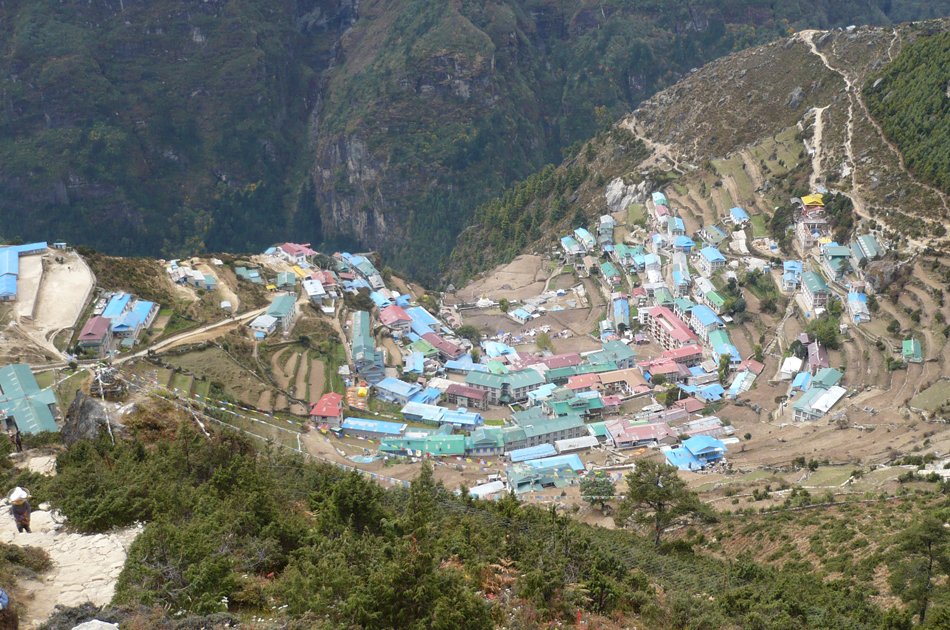 Trekking in Gokyo Valley is one of the most famous and beautiful trekking routes in the Everest region of Nepal Himalayas. This route comprises the largest glacier in the Himalaya (the Ngozumpa Glacier), the beautiful lakes, view of five 8000m peaks from Gokyo Ri, a variety of flora and fauna, and an opportunity to experience Buddhist religion and culture.

The Gokyo Lake is located on the west side of the Ngozumpa Glacier. The Gokyo Ri is the most anticipated achievement amongst trekkers who really ponder to explore a different variety of beauty such as mountain panorama, flora, and fauna, religion and culture. Apart of the above-mentioned features, Namche Bazaar and Khumjung Village "The home Land of Sherpa's" are also remarkable sites on this trip.

On arrival at the airport, you will be met by one of our representatives (who will be holding a card with your name on it) and taken to your hotel by private car/van or bus. You will be given information about your trek and an appointment will be made to meet your trekking leader for the following day.

The day starts with a slow and easy morning. Today is for rest after your long journey to Nepal and to prepare for your trip, for example, to sort out the things you may need during the trekking. In the afternoon your trekking guide will meet you and give details about your trip.

If you need any help, feel free to ask your guide, as he will be happy to sort any problems you may have.

Your trek begins here at Tenzing and Hillary Airport at Lukla, leaving early in the morning from your hotel in Kathmandu. You will have a packed breakfast provided by your hotel which you will have ordered the previous night.

On your arrival at Lukla airport after a 35-minute scenic flight from Kathmandu, you will be introduced with your porters, who are eagerly waiting for your arrival. After a short brief from your guide, we will begin our trek towards Phakding. Here you will have some free time to explore the town and to take some pictures of the shortest and most technical airstrip in the world.

Then we will begin our trek walking along the Dudh Kosi River, descending gently until Thado Koshi and passing through Chaurikharka and Ghat, before arriving at Phakding.

Today we will continue toward Namche Bazaar, walking along the bank of the Dudh Koshi river, crossing the river many times on exciting suspension bridges laden with prayer flags.

After entering Sagarmatha National Park, the trail climbs steeply with breathtaking views. Namche Bazaar known as the Gateway to Everest is home to many quality restaurants, hotels, lodges, and shops.

Here you will find a money exchange and an internet cafe. Namche is one of the biggest villages along the whole Everest trail.

Today begins with a nice and easy morning. We will be spending one more night here to get acclimatized. After your breakfast, we will hike up to the Everest view Hotel from where you can enjoy a 360-degree view of the Himalayas including Everest.

Passing through Syangboche airport, we will spend about an hour at the hotel and enjoy a drink before returning to Namche Bazaar for your lunch. Now you are free for the whole afternoon to explore the town on your own.

We head towards to Dole at the elevation of 4130m, 15 minutes up to Chorkyang as a starter. The trek continues along the western slope of Dudh Koshi River enjoying the magnificent views of the mountains and the trail climbs steeply Sanasha to Mong-la.

We drop down Forste Tenga at the elevation of 3500m, where you are stopping for lunch, and steep ascend after lunch to approach your destination for today. An excellent View of Thamserku and Kangtega is the meaning full to decide to spend one night here in Dole.

Today we are heading onwards from Dole, to move towards Machchhermo, passing through few tea houses on your gradual ascend.

Walking through Juniper forest with the excellent views of Cho Oyu, and its neighbouring peaks of Kantega and Thamserku.

Today you are excited to meet your final destination, Gokyo (4790m).

The trail today follows the west side of the Ngozumpa Glacier, Passing by the first and second lakes, to Gokyo Village situated on the east bank of the third Gokyo lake. Exploring the lake and the glacier would be a good idea to utilize your free time in the late afternoon.

Today is for the most awaited and final destination of this trek. The steep climb brings us up to the top of Gokyo Ri at the elevation of 5483 meters.

It is an emotional moment of your trip because you have achieved your final goal to the Gokyo-Ri, from where the stunning views of the great Gokyo valley, the enormous Ngozumpa Glacier and a breathtaking view of Himalayan Sangri-la including all these giants: Everest, Lhotse, Makalu and Cho Oyu can be seen.

Now it is time to descend to Machchhermo via Gokyo, picking up our stuff from the lodge, walking back along the same trail which we had taken on the way up.

Today we head on to Namche Bazaar after breakfast, although we are descending about 1000m today there are some serious ascents too. (3440m/6hrs) We stop at Dole for lunch and continue our trek to Namche Bazaar enjoying the magnificent view of Himalaya and valley which you missed on the way up.

Today we are walking all the way to Lukla with some ascends and descends, we will follow the same route we took on our way up to Namche Bazaar, stop at Phakding for lunch and then continue after lunch to approach Lukla.

Finally, the trip completed. Today you will enjoy the 30-minute scenic flight back to Kathmandu and enjoy a relaxing afternoon.

Today you will enjoy a full day sightseeing around Kathmandu Valley. You will go to Pashupatinath Temple situated 5 kilometres east of Kathmandu City. Pashupatinath temple is one of the holiest temples dedicated to Lord Shiva.

Situated amidst a lush green natural setting on the bank of the sacred Bagmati river, the temple built in pagoda style has a jilted roof and richly carved silver doors. Visitors will be permitted to view the temple from the east bank of the Bagmati River as the entrance to the temple is strictly forbidden to all non-Hindus.

Pashupatinath is the center of an annual pilgrimage on the day of Shivaratri which falls in the month of February/March. Behind the temple are the cremation grounds. Next, you will visit Boudhanath Stupa. This Stupa is 8 kilometers east of Kathmandu City and is one of the biggest in the world of its kind. It stands with four pairs of eyes in the four cardinal directions keeping watch for righteous behavior and human prosperity. This Buddhist Stupa was built by King Man Deva on the advice of the Goddess Mani Jogini. It is built on an octagonal base inset with prayer wheels. The shrine is ringed by houses of Lamas or Buddhist priests. You will now continue to Swayambhunath Stupa.

Swayambhunath is a Buddhist Stupa and it is said to be 2000 years old. The Stupa which forms the main structure is composed of a solid hemisphere of brick and earth supporting a lofty conical spire capped by a pinnacle of copper gilt. Painted on the four-sided base of the spire are the all-seeing eyes of Lord Buddha. The hill here is a mosaic of small Chaityas and Pagoda temples such as Patan Durbar Square, like its counterpart in Kathmandu and is an enchanting mélange of palace buildings, artistic courtyards, and graceful pagoda temples.

Listed as a World Heritage Site, the former royal palace complex is the center of Patan’s religious and social life and houses a museum containing an array of bronze statues and religious objects. One remarkable monument here is a 17th-century temple dedicated to the Hindu god Krishna, built entirely of stone. The main attractions in Patan beside the above-mentioned places to visit are, the Golden Temple Kumbheshwar, Krishna Mandir, Jagat, Narayan, Mahaboudha, Ashokan Stupa and Machchhendranath temple.

Today is free for last minute shopping for souvenirs or gifts for your family, friends or relatives.

On departure, you will be transferred to the International Airport.

Pickup and Drop-off
We will pick you up from Tribhuwan International Airport (TIA) in Kathmandu upon your arrival.
Know Before You Go
Customer Reviews
Add New Review
Add new review
No Discussion Comments found.